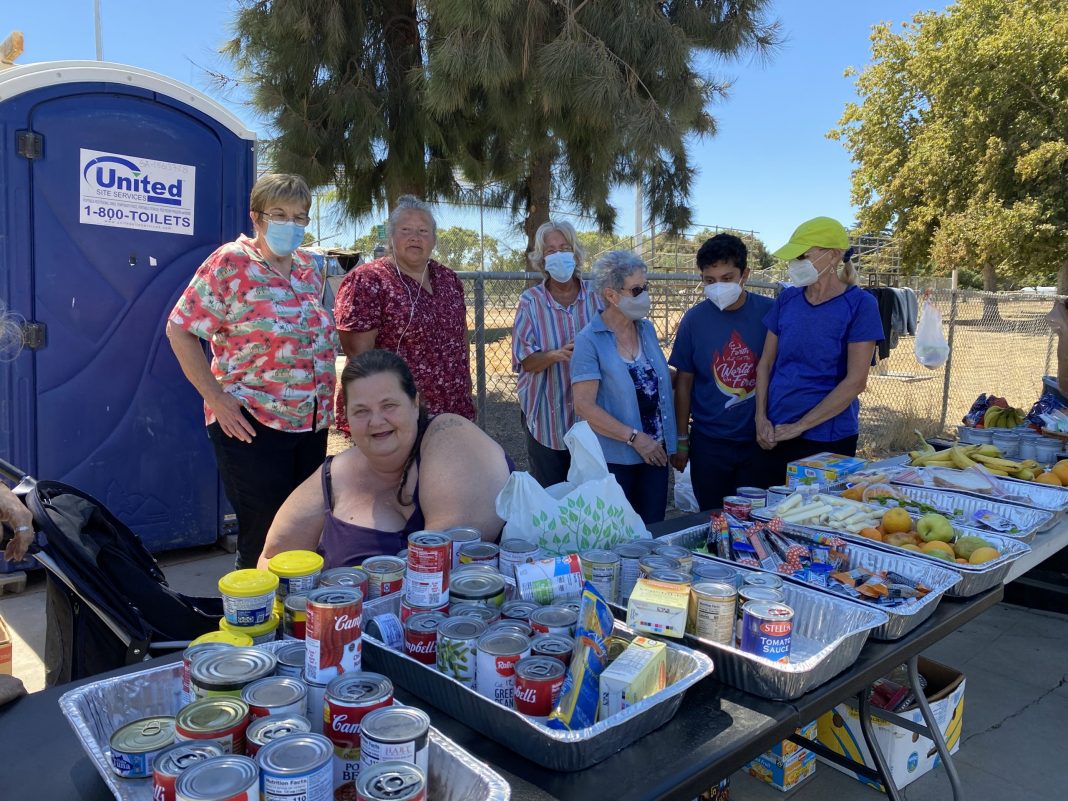 One San Jose woman’s journey out of homelessness

After nearly two harrowing decades of living on the streets, Kellie Goodman finally has the keys to her first San Jose apartment.

“I cried,” Goodman told thecupertinodigest.com. “Then I took a long shower and jumped into bed. I haven’t been able to do that for a long time.”

Goodman, who used to work as a nurse in Modesto, arrived in San Jose 19 years ago with a few bags of clothes and post-traumatic stress disorder after fleeing an abusive relationship. The authorities sent her to a shelter for domestic violence survivors.

“I was there for 30 days, then they kicked me out,” Goodman said. “I was out on the street, and I didn’t know anybody.”

She tried to work odd jobs to make ends meet, but it was never enough. Her life became unstable. She had no permanent shelter and her world became entangled with drugs. Goodman cycled in and out of prison on various drug charges and petty crimes—until her best friend died from fentanyl a few years ago.

“That scared me straight, I haven’t done drugs since,” she said.

In a wealthy county where 10,000 people are sleeping on the streets and 250 homeless people died last year, some stories have a happy ending. Goodman could’ve been one of those statistics. But she survived and now has a second chance at life, a success story that highlights the county’s ramped-up efforts to tackle the crisis with more housing and prevention measures.

As her health started to decline, Goodman, 55, desperately wanted to get into housing, but didn’t feel entitled to ask for a roof over her head.

“I really didn’t think I deserved it anyway, I have done some bad stuff in my life,” she said. “But I learned to forgive myself for some of the stuff I did, and I started realizing it’s okay to ask for help.”

Kellie Goodman (seated) became homeless about 20 years ago. She finally has a roof over her head after struggling for years to turn her life around. Photo by Tran Nguyen.

Goodman first reached out to the county’s nonprofit partner, HomeFirst, to start a housing plan more than three years ago, but she said she never heard back from case workers. She thought her chance was gone until last year when an advocate connected her with Abode Services, a Fremont-based nonprofit.

Tiny homes are coming, whether San Jose lawmakers like it or not

Within six months, an Abode social worker and Santa Clara County officials helped her secure an apartment in a permanent supportive housing complex on Pedro Street in San Jose. Tenants at the complex pay 30% of their income to rent. Most, like Goodman, rely on social security for their livelihood.

“I’m so grateful for this place,” Goodman said. “They have everything.”

Goodman is among a few thousand formerly homeless people who are benefiting from the recent and unprecedented investment in affordable housing and shelter in Santa Clara County.

Using the $950 million housing bond Measure A, county officials have helped fund more than 700 affordable homes, with plans to add a total of 4,800 residences in the next few years. San Jose has also seen some success through its Measure E property transfer tax to help fund affordable housing projects, as it’s working to add 400 tiny homes as short-term solutions.

Santa Clara County—with the help of local cities, nonprofits and religious institutions—helped 1,852 people move off the streets and into permanent housing in the first half of the year. According to the county, that’s a 20% increase from the prior six months. Santa Clara County has housed more than 7,850 people since 2020, with plans to move at least 20,000 people off the streets by 2025.

“This reflects the heroic efforts we’re seeing out of our local jurisdictions and nonprofit partners,” David Low, spokesperson for Destination: Home, told thecupertinodigest.com. The nonprofit works with the county on its homeless plans. “Increasing production of deeply affordable and supportive housing is the key, but the system only works when we have great partners.”

Despite making headway, advocates and officials say the work is far from finished. Advocate Gail Osmer, who is critical of San Jose’s and Santa Clara County’s approach, said while some strategies have worked, new homeless camps continue to spring up. Osmer is particularly worried about the camp near Columbus Park, where roughly 100 people live.

“Measure A funds are good, and it’s wonderful because more housing is opening up,” Osmer told thecupertinodigest.com. “But I just see more and more people at the camps I go to.”

Goodman (seated) continues to visit the encampment near Columbus Park to check in on her friends. Photo by Tran Nguyen.

Goodman, who spent years sleeping near Columbus Park, said she worries about others in the area. Many have become her friends and family over time, she said.

“None of us out here want to be a burden to anyone, but different circumstances all pushed us into homelessness,” she said. “The county and the city need to work with us, not against us.”

The empty land next to Columbus Park has turned into one of the biggest encampments in the Bay Area with an estimated 500 people during the peak of the COVID-19 pandemic. San Jose is under a deadline to clear the area by the end of September, or the city risks losing millions in federal funding.

With a stable roof over her head, Goodman continues to visit the park several times a week, checking in on those who are sick and feeding the hungry.

Mamas Ramirez (standing) said Goodman has always looked out for others, adding she’s happy for Goodman to find a home. Photo by Tran Nguyen.

Mamas Ramirez, an unhoused person living near the park, said Goodman has always looked out for others.

“There’s times when I’ve had to go to the hospital and she was there for me,” Ramirez, who has known Goodman for years, told thecupertinodigest.com. “We’re like sisters. I’m happy that she found a home, but I miss her out here.”

Osmer said Goodman has become a reliable resource for many.

“I’m really proud to call her a friend,” she said. “The people out here are her family, even though she doesn’t live out here anymore. She loves them, and they love her.”

The post One San Jose woman’s journey out of homelessness appeared first on thecupertinodigest.com.