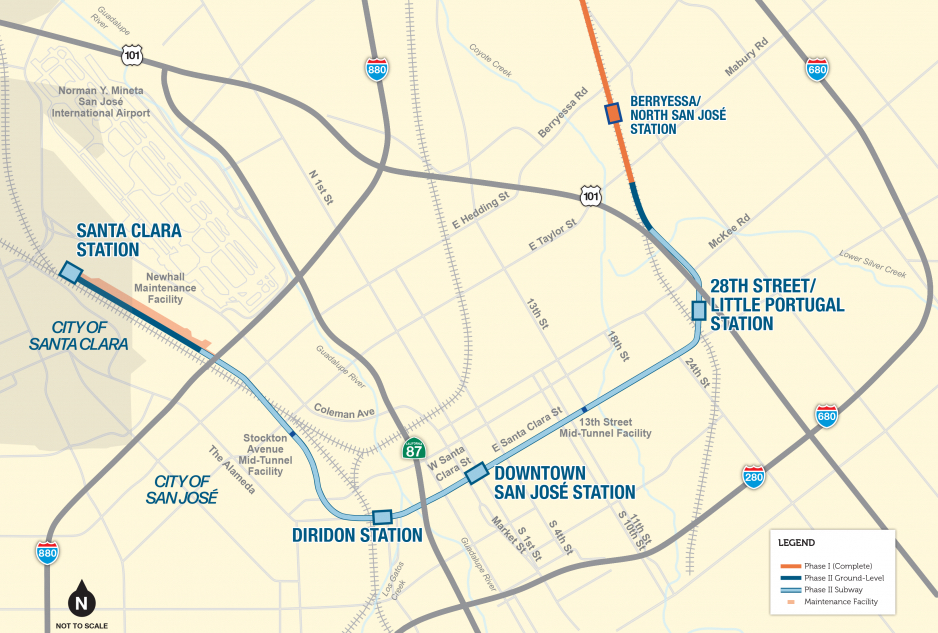 A controversial design element of a multi-billion-dollar BART plan to downtown San Jose could be shifting under a new proposal.

The BART extension project is set to cost $6.9 billion, according to VTA estimates, but federal estimates place that closer to $9.1 billion. It will run from the current end of the line in Berryessa through Little Portugal at 28th Street, into downtown San Jose along Santa Clara Street, to Diridon Station and then northwest to Santa Clara. VTA is building the transit extension and BART will take over operations after it is complete.

This map shows an overview of VTA’s BART extension project through downtown San Jose and into Santa Clara. Image courtesy of VTA.

While current approved plans call for stacking two BART train platforms on top of each another inside a single, 43-foot-wide underground tunnel, VTA contractor Kiewit Shea Traylor is now proposing to widen the tunnel to 48 feet, and place the trains side by side with a single platform in the middle.

It’s one of dozens of potential “innovations” the contractor is evaluating while it looks to improve passenger experience across the massive four-station BART extension project and potentially save costs, according to transit officials.

But which changes will get a green light, and whether the cost will be more or less isn’t clear.

A vision of seamless Bay Area transit gets another chance

The contractor and VTA will hold a board workshop to go over the ideas in greater detail mid-September, according to Bernice Alaniz, a spokesperson for the project.

Elizabeth Chien-Hale, a board member of the San Jose Downtown Residents Association, said the suggested changes seems like a good compromise between a single-bore tunnel with stacked platforms that VTA is pushing and the twin-bore tunnel design some transit advocates said should be built instead.

“It could be the best of both worlds,” Chien-Hale told thecupertinodigest.com, noting it could reduce rider confusion for those who might not know if they’re on the correct platform.  “Especially if you’re trying to catch a train at the last minute.”

But whether the BART trains cruising underneath San Jose travel through one tunnel or two isn’t a done deal yet, either.

VTA says a single-bore tunnel will reduce the impacts to businesses, by requiring less tearing up of streets. It could also save costs by avoiding the hassle of relocating underground utilities.

Some critics of the project say a single-bore will force riders to descend farther underground on elevators or escalators that could be subject to breakdown than with a twin-bore.

While the agency has stood firm behind its plan, San Jose Mayor Sam Liccardo, Vice Mayor Chappie Jones and Councilmember Raul Peralez—all VTA board members—pushed the board to call for an independent review of the two different tunneling options earlier this summer.

Alaniz said the nonprofit American Public Transportation Association in Washington, D.C. is conducting that review now and its report could be ready by mid-September.

“I think the intent was to really demonstrate that yes, this project is the right project,” she said, but noted the decision is not a foregone conclusion.

Daniel Zubizarreta, CFO of The City Fish restaurant on E. Santa Clara Street in downtown San Jose, is concerned about street closures during construction of the BART expansion. Photo by Joseph Geha.

Federal transit officials who reviewed the project plan said in a report the costs could run closer to $9.1 billion, according to Alaniz. The report noted costs could rise higher than VTA’s estimates because of potential tunneling delays and inflation rates, among other factors. The report said VTA’s timeline estimates were “highly aggressive,” Alaniz said. The federal government currently plans to kick in about $2.3 billion for the project.

Pre-construction work on the west side of San Jose could begin as early as next year, with full construction slated to begin by 2024, Alaniz said. The work could be complete in 2030, though the federal report noted the project could be delayed until 2034.

While contractors and transit officials decide how to best build the stations, tracks and tunnels, some downtown San Jose business owners are wary of the potential hit to their operations when the project finally breaks ground in that part of the city.

Daniel Zubizarreta, CFO of The City Fish restaurant on E. Santa Clara Street across from where a future station entrance is planned, said he’s mainly concerned about street closures during construction.

“We depend a lot on foot traffic and right now it’s very little foot traffic. I can’t imagine what it would be like when the full project is being undertaken,” Zubizarreta told thecupertinodigest.com. “People are going to take alternative routes, they’ll be going down the other blocks.”

The uncertainty over the project details means Zubizarreta doesn’t have a clear picture of how long his business could be disrupted by construction work and whether The City Fish will survive it.