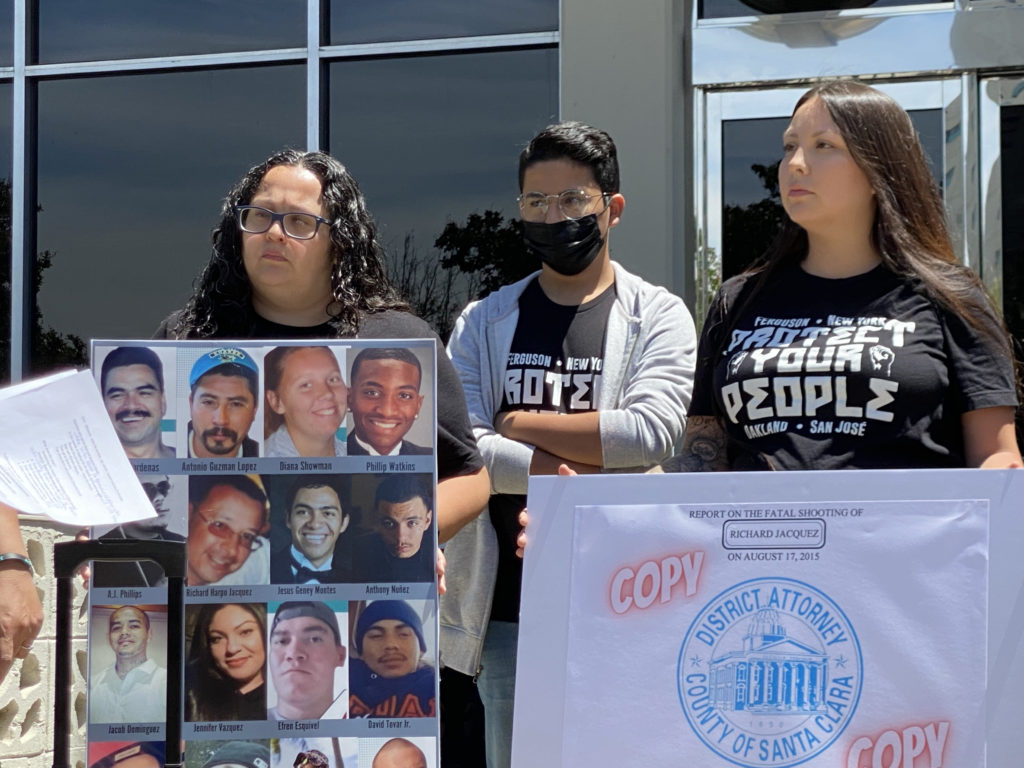 Families want new investigations into the deaths of their loved ones following reporting errors uncovered in the Santa Clara County District Attorney’s Office.

Silicon Valley De-Bug, a nonprofit in criminal justice reform comprised of families impacted by police shootings, said sloppy incident reporting by the DA’s office has been discovered after reviewing a number of cases. This includes incorrect names of victims in what appears to be copied and pasted paragraphs regarding fatal police shooting incidents. The families and nonprofit said it indicates the reports were glossed over and not critically reviewed. They want an outside investigation to re-review the cases to determine if the police officers’ actions were justified.

The DA’s office writes an incident report each time there is an officer-involved shooting of a civilian—fatal or not—to determine whether the use of force was justified, and whether the officer should be clear of criminal liability.

“The main issue is there was not a thorough investigation done. If you’re doing cut and paste jobs, you’re just going with the flow,” said Laurie Valdez, who’s partner Antonio Guzman-Lopez was killed by San Jose State University police. “You would’ve thought that they would have tried to change it to the proper name, but they dropped the ball. That’s how sloppy they are because nobody’s ever reviewed their work.”

Were the investigations of #policeshootings thorough? Family members say no. #SanJose #santaclaracounty

Guzman-Lopez was shot in the back twice in 2014. It was his name that reappeared in the three other reports that did not pertain to his incident. His name was found in the incident reports pertaining to Byron Rosas, Richard Jacquez and Leonel Acevedo, who were all fatally shot by San Jose police officers in 2015—a year after Guzman-Lopez was killed.

“This is just the few that we’ve researched,” Valdez said. “Can you imagine how many more (there are)?”

“We would be happy to meet with Raj Jayadev (founder) of De-Bug to discuss his concerns,” Webby told thecupertinodigest.com. “We’ve met him many times before and worked with De-Bug on resentencing and many other criminal justice reform projects.”

Webby and Rosen did not respond to requests from thecupertinodigest.com regarding how the incident report errors occurred. Rosen is facing two challengers in his bid for reelection.

Families of those killed by law enforcement in Santa Clara County stand at a news conference in front of the county administrative building. Photo by Jana Kadah.

Why San Jose can’t fully audit its own police

Valdez and other families said they do not have faith in the DA’s office anymore. Silicon Valley De-Bug has reviewed 15-20 reports so far, but plans to look through all reports starting in 2011, from the time Rosen took office. There have been at least 50 people killed in Santa Clara County since 2011, according to the online portal of officer incident reports produced by the DA’s office. That count does not include fatal shootings from 2020 to date or any non-fatal shootings. Every officer from 2011 to 2019 has been cleared of criminal liability by the DA.

“Officers are never charged, never brought to justice, so investigations need to be done independently,” Rosie Chavez, aunt of the late Jacob Dominguez, told thecupertinodigest.com. Dominguez was shot and killed by San Jose police while unarmed in 2017. “The DA is law enforcement. So law enforcement is still investigating law enforcement, so that’s why the office doesn’t seem to find any of these officers accountable, or really responsible for the deaths. It’s always: they were justified.”

Chavez, Valdez and a dozen other families gathered in front of the county administrative building last week to announce their demands and share their letter with Rosen. When they tried to give the letter to Rosen or workers at the DA’s office, the receptionists said no one would accept it and that they could not leave it with reception. Webby said Rosen was not at the county building at the time.

An investigator in the DA’s office outside of reception ultimately took the letter, but many families said the initial refusal exemplified how the DA’s office has treated them.