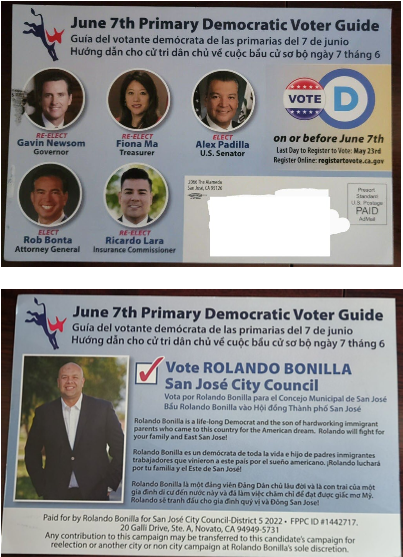 The Santa Clara County Democratic Party is accusing a local candidate of using misleading campaign flyers to make it appear he has the party’s endorsement—when he doesn’t.

James added the use of a capital “D” in a circle logo is the actual logo of the Democratic Party and is a federally registered trademark.

Bonilla did not offer a response about the cease-and-desist letter. He did not say whether he would remove the logo from his mailers.

“I’m a proud Democrat, that’s proud to be endorsed by many Democrats in my district,” Bonilla told thecupertinodigest.com. “That’s it.”

Bonilla has denied the allegations, saying they are the result of an ugly divorce and custody battle. The Democratic Party’s endorsed candidate, Ortiz ,also has a checkered incident in his past: an arrest in 2012 in connection with a strong-armed robbery. The charged were dropped after Ortiz promised to sever ties with a gang and comply with community rehabilitation and periodic check-ins. Ortiz has spoken publicly about this experience and said he regrets his actions.

Bonilla was accused last December of inappropriately using his title as planning commissioner on door-hanging flyers that listed COVID-19 resources. The flyers included a link to a website used by his campaign. A city policy updated in 2020 says commissioners can only use their titles in resumes and public communications about commission work.