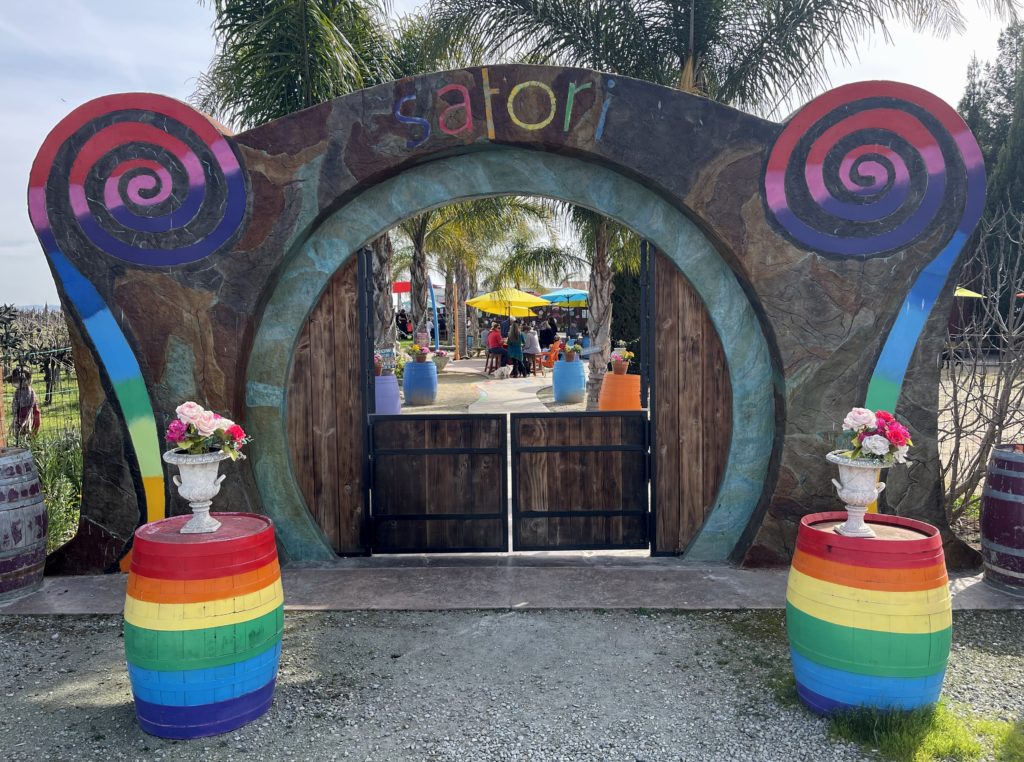 Visiting Satori Cellars’ tasting room in Gilroy is as much about entering an enchanted realm as it is about tasting its award-winning wines. Coming through the round door of the entrance portal next to the vineyard, music, laughter, gentle dogs and the brightest colors in the rainbow are waiting for you there.

The atmosphere is relaxed and slightly mystical, which is exactly what co-owner Sandy Moller hoped for when she designed the cabana-themed outdoor space.

“I wanted the place to be a playground for adults and children, ” she told thecupertinodigest.com. “Where people could feel the magic, the playfulness and the creativity, and it would make them smile, just like taking a little vacation in our wonderland.”

The estate-grown wines include nine that recently won medals in the 2022 San Francisco Chronicle Wine Competition. Since first entering the competition in 2006, the year Satori Cellars was founded, the Santa Clara County winery has picked up 86 Chronicle medals.

The portal to Satori Cellars in Gilroy. Photo by Robert Eliason.

The winery had its start in 1993, when Tom Moller, who was running a semiconductor business at the time, bought a prune orchard—only to discover the trees were diseased. After tearing them out in 1995, he waited five years to choose another crop.

“I had to plant something,” he told thecupertinodigest.com. “I chose grapes because they are beautiful, then started as a home winemaker and it sort of went out of control. My job was less and less fun and making wine was more fun, so I decided to go full time into creating the winery.”

Tom has no formal education in winemaking, though he took classes in viticulture.

“I just had friends who were experienced winemakers,” he said. “I learned through them. People ask for the secret to making wine and I tell them, ‘my mantra is, don’t screw it up.’ I am more in a guardianship position—so I keep it simple and treat the grapes properly.”

The name of the winery comes from the first two letters of Sandy and Tom’s names, along with their son Riley’s.

“Tom wanted to come up with a name that incorporated our family,” Sandy said. “He was playing with the letters and came up with ‘Satori,’ which is easy to say and to read. Then we found out in Zen Buddhism it means a moment of enlightenment that might leave, but will come back again. It seemed perfect for us, a coming together of people and wine.”

While crafting the wine is a serious business, the names and labels reflect the whimsical and mystical nature of the owners.

The 2019 Harmonic Convergence, a gold medal-winning petite sirah, syrah and zinfandel blend, is described as “a balance beam of lingonberry, loganberry and black cherry” that “always sticks its dismount.”

The 2019 Cabernet took a gold medal this year and is customer Linda Kobiyashi’s favorite. She’s been coming to Satori since the tasting area opened in 2009.

“I love their wines and I have had them all,” she said. “I come here as much as possible because I love meeting all the new people who come here and the atmosphere is great. But I don’t do all the tastings because I know I just want my cabernet.”

John Wing, a tasting room employee who discovered the winery as a customer nine years ago, favors the 2019 Joyous, a cabernet sauvignon, syrah and merlot blend which took a bronze medal.

“I was not too sure of the setup that first time,” he said. “It was outdoors, with dogs and kids and all the Caribbean colors. When I came back a second time, I fell in love with the hospitality and the wine—I had never joined a wine club before but I joined theirs.”

Wing started wanting to be on the other side of the counter, so he could serve and promote the wine to the members and guests.

“Tom makes some of the best wines in Santa Clara County,” he said. “And he is dedicated to putting in the time and effort to making something exceptional.”

“Exceptional” is a good word for both the wine and the atmosphere of Satori.

“We hope that as people come through our portal, they feel cleansed and are entering a new experience of pleasure and camaraderie,” Sandy said. “I can’t tell you how many friendships have been built here, as people come and linger over the wine, having a moment of beauty together.”

Hours: Open every first and third weekend of the month, 12-5 p.m. by reservation

The award-winning wines of Satori

2019 Merlot of the Violet Flame

2018 Merlot of the Violet Flame