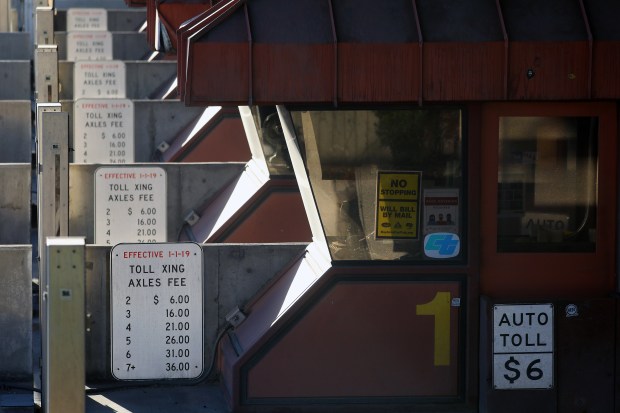 Hundreds of thousands of drivers may face an unpleasant surprise from the DMV in the coming months: a lien on their annual vehicle registration for unpaid bridge tolls and a slew of tacked-on penalties.

It’s part of a renewed crackdown approved on Wednesday by the Bay Area’s bridge authority, which is looking to recoup $50 million in unpaid tolls and levy a staggering $134 million in late-payment penalties that have amassed since January 2021.

But the move comes with controversy. Advocates working with low-income communities say threatening vehicle registration over unsettled tolls will have devastating effects on people who rely on their cars for everything from job security to shuttling kids to school.

“A lot of our clients are literally living out of their cars,” said Ocean Mottley, an attorney with Bay Area Legal Aid. “So losing their registration is not just losing their car, they’re losing their house.”

Many of those drivers will be told they must pay their debts before they can renew their registrations, while the authority is also developing a plan for people making up to 200% of the federal poverty level, about $27,000, to avoid a registration hold through staggered payments.

Wednesday’s 6-to-1 vote by the Bay Area Toll Authority Oversight Committee renews a policy that was paused during the pandemic, signaling a switch from leniency in difficult times to a crackdown on toll violations.

“I think we need to treat everyone like adults,” said David Rabbitt, a Sonoma County supervisor who sits on the board. “How can we walk away or turn our back on the significant amount of past due revenue?”

The surge in unpaid violations is largely due to the agency ditching toll collectors during the pandemic over COVID-19 concerns, allowing drivers without a FasTrak transponder to cruise through without any immediate payment. Those drivers are sent toll crossing charges in the mail and must foot the bill regardless of who was driving.

In 2020, the agency waived late fees and paused its policy to move drivers carrying toll debt to the DMV and collection agencies. This year the authority also dramatically reduced the maximum fines from $70 to $15 per violation.

But the authority says it’s facing a growing backlog of unpaid tolls that it urgently needs to submit because the DMV only accepts transactions up to three years old. Toll violations will start timing out in 2024, leaving the agency unable to force payment.

Drivers without a FasTrak transponder may be unfairly penalized, advocates say, because the agency mails notices to addresses tied to vehicle registration. In one case a Southern California man was billed dozens of bridge toll violations for a car he sold 11 years earlier, The San Diego Union-Tribune reported.

“The address on file with the DMV so often may be three addresses ago,” said Rachel Hoerger, an attorney with the Bay Area Legal Aid. “DMV is a place where things fall through the cracks.”

There are about 8.8 million long overdue violations spanning at least 553,000 vehicles across the seven state-owned bridges from January 2021 to May of this year. By comparison, the agency forwarded 1.2 million cases to the DMV or collection agencies in 2019, according to a report from SPUR, an urban policy think tank. These violations span all Bay Area toll bridges except Golden Gate, which is run by a separate authority.

“It used to be so easy you’d just roll up and pay right there,” said Tyeshia Borela, 48, who didn’t have a bank account to link to a FasTrak transponder when she racked up $780 in bridge crossing tolls and fees last year. Borela was able to lower her debt with the help of a legal aid non-profit, but she says a registration hold would have upended her daily commute from Rio Vista to San Francisco.

“It has so much impact on people trying to make ends meet,” said Borela. “But they’re going to keep on driving until that car gets taken away.”

During a heated conversation on Wednesday, the toll authority said it is looking to navigate mounting tolls by moving DMV holds in a staggered process that immediately forwards violations tied to commercial vehicles – about 9% – for liens and develops a program for low-income drivers to avoid a hold through a payment plan.

Multiple supervisors said they are deeply concerned about the authority’s current proposal that only makes payment plans available for very poor people in the Bay Area.

“Two-hundred percent of poverty is $55,000 a year for a family of four,” said Hillary Ronen, a San Francisco supervisor who opposed the plan. “I don’t even know how a family of four survives in the Bay Area on $55,000.”