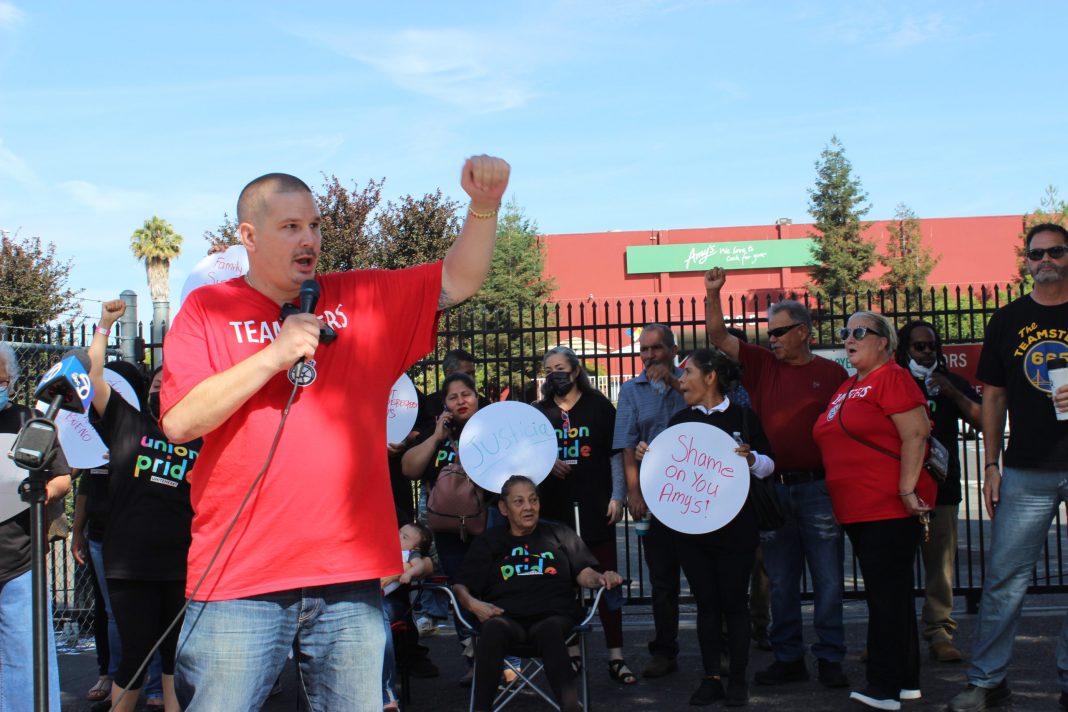 Former employees of Amy’s Kitchen, a national frozen food brand, came out to protest the abrupt closure of its San Jose factory — calling it union busting.

Nearly 30 workers on Tuesday gathered in front of the shuttered factory on 1885 Las Plumas Ave., to highlight alleged mistreatment they endured. They said they have been subject to dangerous working conditions, intimidation and mistreatment by superiors. The employees tried to unionize a month before they were told the factory was abruptly closing on July 18, citing inflation and supply chain problems. Three hundred employees lost their jobs.

“There was unfairness to a lot of Spanish-speaking and Vietnamese people, (and when I spoke up) Amy’s Kitchen started retaliating against me, threatening my position,” said Ruby Luna, a laid-off employee, encouraging people to boycott Amy’s Kitchen products. “A lot of us have kids. We have families. We have elderly who we take care of, and it’s hard to go out there and start from the bottom to look for jobs.”

The Food Empowerment Project, which advocates for fair farmworker conditions and health food, UNITE HERE Local 19 and the Teamsters came out in support at the protest. Assemblyman Ash Kalra joined the rally as well.

“We have seen these anti-worker tactics being utilized by companies all over the United States, as workers continue to organize and fight for representation, fair wages and safer working conditions,” Kalra said. “They’re saying we’d rather close up shop then give in to our workers, which is a really sad statement, because the reality is when I when you look at Amy’s website it says the food is made with love.”

Tony Delorio, principal officer of Teamsters Local 665, speaks to media gathered about the his concerns of the factory’s abrupt closure. Photo by Jana Kadah.

The protester accusations are in stark contrast to the frozen food company’s image of a family-oriented caring environment that makes organic, healthy meals.

However, Amy’s Kitchen said it is still dedicated to maintaining “a culture of care when making business decisions,” but it had no choice but to close.

“Like many other businesses, we are working to meet the challenges posed by widespread supply chain disruptions, fluctuating consumer demand, and persistent inflation,” the company’s public relations team said in a statement. “While Amy’s Kitchen’s three other food processing facilities have been able to meet production and revenue goals, the San Jose plant was losing $1M/month, which could not be offset by the company’s other facilities.”

The company also put out a statement in response to similar accusations at its manufacturing headquarters in Santa Rosa.

“We always take any allegation regarding employee safety seriously. We have worked diligently to research and ensure that our working conditions are aligned with our values, policies and practices and are in full compliance with all regulations,” the company stated, emphasizing that it supports workers unionizing.

In Santa Rosa, workers claim dangerous conditions led to multiple injuries. In January, an employee filed a formal complaint with the California Division of Occupational Safety and Health alleging workers are restricted from using the restroom or accessing clean drinking water to maintain line speeds. It also states that there are locked fire exits, worn-out floor mats and a lack of proper training for tasks like heavy lifting and operating heavy machinery.

Former employees of Amy’s Kitchen are protesting outside of the San Jose factory. They say the company’s abrupt closure is union busting. @Ash_Kalra was there to voice his support for workers.

Amy’s Kitchen, founded in 1988, opened its first facility in Sonoma County before growing into a chain with 3,000 workers across California, Idaho and Oregon. It has been popularized as the antithesis of big brands, marketed as a globally-minded company with an emphasis on treating workers fairly. The San Jose factory, the company’s fourth location, opened in 2021 to meet the demands of the COVID-19 pandemic.

Just before the plant’s closure, Unite Here Local 19 filed multiple unfair labor practice charges against Amy’s Kitchen with the National Labor Relations Board on June 1, alleging the workers in San Jose have been fired or disciplined for trying to organize a union.

Lauren Ornelas, founder of the Food Empowerment Project, called on the company to prove their financial losses.

“No more lies. No more attempts to hide behind this façade you’ve created for your company,” Orenals said. “Come out and prove exactly what you’re saying — that you did not close and cost the livelihood of 300 people in our community because you did not want them to talk about their (mistreatment). Prove it.”