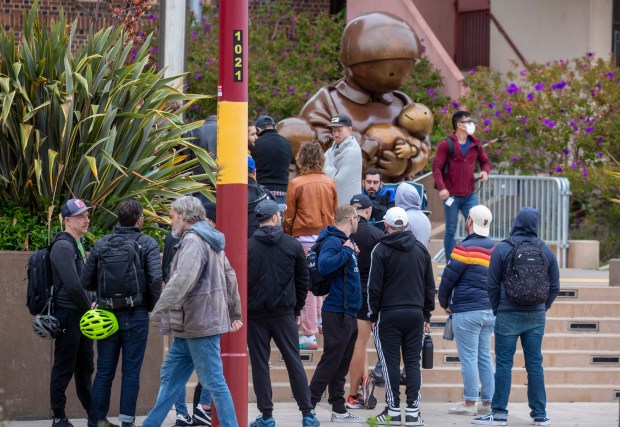 How widely will monkeypox spread in the Bay Area?

With monkeypox cases continuing to trend upward across the Bay Area and the rest of the country, many epidemiologists believe it’s only a matter of time before the virus that has primarily circulated within the LGBTQ community spreads to the general population.

And some early indications suggest that the leap already has happened. On Friday, a day before the Centers for Disease Control declared monkeypox a global health emergency, the agency reported that a California toddler had tested positive for the virus.

Even so, there remains much uncertainty as to where monkeypox is headed.

“This is the same question that was asked about HIV when infections were first happening,” said Dr. Lee W. Riley, a professor of infectious diseases and vaccinology at UC Berkeley. “And it took some time until it started appearing in the general population. It will happen (with monkeypox). It is just really hard to say when it will happen.”

Across six Bay Area counties there are now a total of 320 cases, a majority of which are in San Francisco, with 215. Alameda is reporting 56, Santa Clara County 39 and San Mateo, Marin and Contra Costa counties are still in the low single digits. California, with 356 cases, has the second highest total in the country behind New York.

Some early data also suggest that certain racial groups are being disproportionately affected by the virus.

Data provided on Tuesday by Alameda County shows that Latinos make up 54% of cases, even though they represent less than a fourth of the county’s population. Data from San Francisco released last week revealed that Latinos make up 30 percent of monkeypox cases within the city, even though they make up only 15 percent of the city’s population. Similar data from Santa Clara County was not immediately available.

Meanwhile, a number of scenarios and factors will determine the virus’ wider spread, Riley said. The virus is believed to spread through skin-to-skin contact during sex, and cases are currently concentrated among gay men.

But Lee said that if the bisexual male community ends up spreading it to women, it could make inroads outside of the LGBTQ population.

“It all depends on the behavior of the people getting infected,” he said. If individuals have sex with a partner they later learn is positive for monkeypox, receiving the vaccine as soon as possible is the most effective way to curb the spread, said Lee.

But vaccines are still hard to come by in the Bay Area, leaving the virus able to burrow itself among a mostly unprotected population. On Tuesday, Santa Clara County reported that it had just 292 doses of the shot on hand. Two hundred of those are already reserved for appointments, and the rest are for those who’ve been identified as high-risk for infection through contact tracing. And in San Francisco, Zuckerberg San Francisco General Hospital had to again close its doors on Tuesday for walk-in appointments because of a lack of supply.

“We encourage advocacy from community members to really call upon the federal government for more vaccine supply,” said Santa Clara County Deputy Health Officer Dr. George Han on a call with reporters on Thursday. “The demand for those who need it is greater than the supply that we have.”

Some health experts are more conservative when gauging the potential for monkeypox to spread.

“I really doubt that it is going to reach much of the general population,” said Dr. George Rutherford, an infectious disease specialist at UCSF. He noted that asymptomatic spread is very unlikely, since monkeypox produces large lesions that an infected person can quickly identify.

“You know when you have it,” he said. “And you can easily see it when the lights are on. I’m not one to pour cold water on romance, but there’s something to be said for seeing if there’s lesions (on your partner). ”

Despite the possibility of bisexual men being a cause of spread to the general population, other diseases that have primarily affected the LGBTQ community haven’t made much of a jump, Rutherford said. HIV, for example, still disproportionally impacts LGBTQ individuals, while heterosexual cases of the virus primarily come from drug use, he noted.

However, both epidemiologists Lee and Rutherford stressed that monkeypox isn’t spreading specifically because of gay sex. Anyone can be infected, they said.

“There’s no magic about men who have sex with men. It is just the population that first got infected in this current outbreak,” said Rutherford. He pointed out that outbreaks in the past have affected all types of people. For example, a monkeypox outbreak occurred in 2003 across six states when individuals were touching prairie dogs who had been near mammals imported from Africa. In that instance, the LGBTQ community was not involved.

Some scientists, meanwhile, are more focused on determining just how prevalent monkeypox is overall in the Bay Area.

Researchers with Stanford’s Sewer Coronavirus Alert Network, which traditionally has been used to determine the amount of COVID and other viruses in the Bay Area’s wastewater, have started measuring monkeypox as of mid-June.

Dr. Marlene Wolfe, who is on the Stanford team, said that their wastewater data show major hotspots of the monkeypox virus in San Francisco and to a lesser extent in the rest of the Bay Area — with the overall trend on the rise.

“We have seen, in general, increasing rates of detection and more days in which we have a positive sample (of monkeypox),” she said. “And overall, higher concentrations over time across the region.”

Wolfe said her team should soon be able to determine how many monkeypox cases are in the region based on the wastewater data they’re collecting.