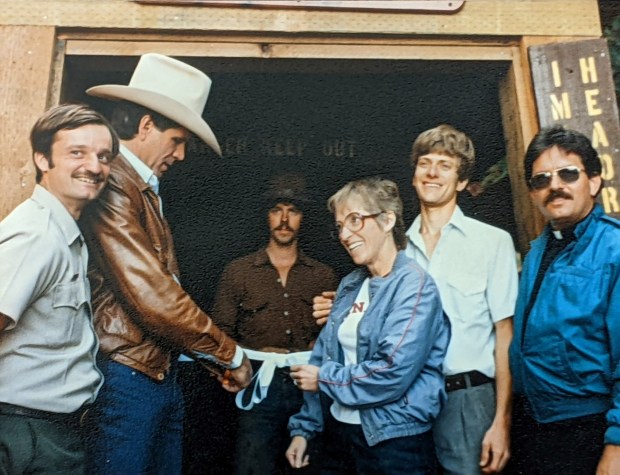 Kitty Monahan, a beloved Santa Clara County preservationist, educator and historian who spearheaded efforts to protect the area’s parks for decades, passed away on July 25. She was 89.

Monahan, who died around midnight at her New Almaden property where she’d lived since 1972, left behind a long list of accomplishments, most notably helping lead the county’s purchase and preservation of the 4,000-acre Almaden Quicksilver County Park, where mercury mining in the 19th-century jumpstarted California’s Gold Rush economy.

Though Monahan was not married and did not have any children, those who knew her well said that the surrounding community stood as her family. In the days before she passed, Monahan had dozens of visitors coming to her New Almaden home saying goodbye.

“She was like our bonus mom,” said Kris Peretti, a close family friend of Monahan’s. “She never had kids…we were her kids.”

Peretti said that although Monahan had a difficult time talking in her last days, she said “thank you” to each one of her guests.

“She was always very loving,” Peretti said. “But she was a very strong, independent woman. Even up until she was older she could throw a bale of hay faster than I could.”

Born on Dec. 4, 1932, Monahan grew up in San Jose and attended Notre Dame High School. She then served as a nun for the next two decades and spent time teaching in various locations around the state, including in the south Los Angeles neighborhood of Watts. Friends say that she broke with the church after disagreements with Pope John XXIII’s leadership.

At the start of the 1970s, Monahan became a math teacher at William C. Overfelt High School. Mark Fleming, who was Monahan’s student during his junior and senior year, described her as a “dedicated and knowledgeable” educator.

“She would work with you if you were slow, which I was,” Fleming said. “Beyond her math skills, she cared about the students. They were personal to her.”

It was around this same time that Monahan also started to embark on her preservation efforts. Along with other community members, Monahan worked to get Santa Clara County to purchase the 4,000-acre Almaden Quicksilver County Park for around $4 million. The area had once been the largest mercury mine on the North American continent, with the element being utilized to separate gold from its ore. Mining operations started in the mid-1840s and lasted for more than a century, making $70 million in profits and turbocharging the region’s economy.

By the mid-1970s, she was known as the unofficial “Mayor of New Almaden” because of her advocacy for the region, said Michael Cox, who spent decades working with Monahan.

In 1983, Monahan, along with Cox, helped found the New Almaden Quicksilver County Park Association, or NAQCPA, which to this day serves as an educational resource for the historical site and has around 400 members. The group quickly began to bolster the park’s amenities and helped direct the county purchase of a private collection of the park’s historical artifacts and an 1850s revival-style mansion known as the Casa Grande, both which eventually formed the Almaden Quicksilver Mining Museum.

“We were both obsessed with Almaden and both wanted the park to be developed into something else,” said Cox, currently vice president of NAQCPA. “Because of its rich history, it could become a center of learning for young people and people who shared in the social and geological history of the park.”

Cox described Monahan as having a “very positive outlook on things,” “tough,” “always smiling” and “tireless” in her quest to safeguard the area’s history.

“She kept a little calendar that she wrote in,” remembers Cox. “She would write little tiny print in each calendar square. There’d be eight or nine things in there. She was constantly hopping from one thing to the next.”

In the intervening years, Monahan would continue in her preservation efforts, founding various groups like the Friends of Santa Teresa Park. She also served on the Citizens Advisory Committee of Santa Clara County’s Open Space Authority and was a member of the Horsemen’s Association.

Altogether, she spent 14,000 hours volunteering for the county’s parks, which she was recognized for in 2014 through a Presidential Volunteer Service Award. More recently, Monahan was given a lifetime achievement award by the Santa Clara County Preservation Alliance in May.

In addition to her preservation work, Monahan was also an avid follower of the San Francisco 49ers and Giants. In her free time, she liked to solve Soduko and crossword puzzles and ride the two horses she kept on her two-acre property.

Garnetta Annable, a Citizens Advisory Committee member of the Open Space Authority who worked alongside Monahan and described her as a “sister,” said that Monahan’s passing leaves a big gap for the area’s preservation efforts.

“We really lost a strong advocate,” Annable said. “We need the younger generations to step forward. We need champions like Kitty.”

A service is planned for Sept. 4 at the county Horsemen’s Association at a time yet to be determined.