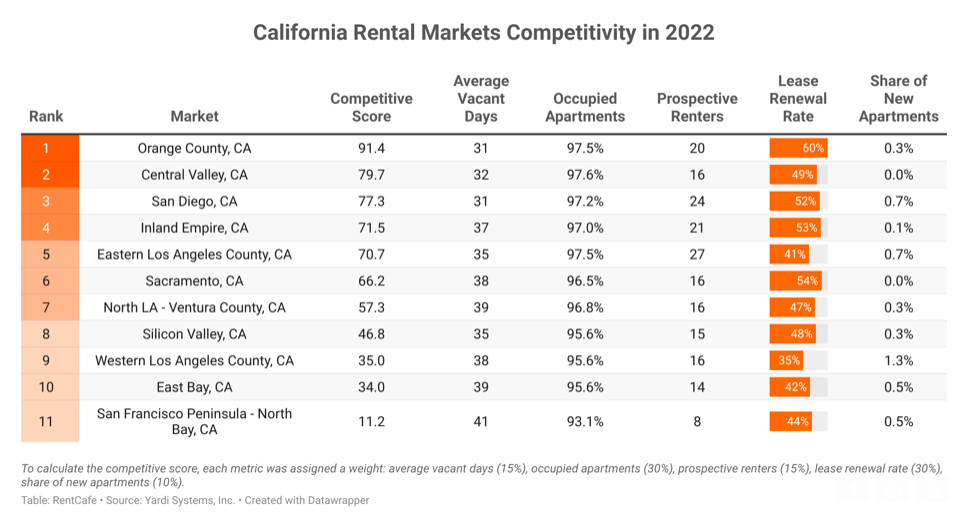 Looking to rent in Silicon Valley? Get in line

In a new study by apartment search site RentCafe, Silicon Valley ranked 8 out of 11 top rental markets in the state. The study looked at the number of renters competing for an apartment, occupancy and vacancy rates, the percentage of new apartments built and lease renewal rates.

Although Orange County has the hottest rental market in the state, Sacramento and the East Bay join Silicon Valley as the most sought after Northern California markets. The study defines Silicon Valley as the San Jose-Sunnyvale-Santa Clara metro area, the cities of Mountain View, Campbell, Milpitas, Palo Alto and San Benito County.

“This seems to be another indicator that we need to build more housing units, especially in our downtown core and around public transit,” said Lisa Faria, president of the Santa Clara County Association of Realtors, referring to strong rental demand.

A market study released by RentCafe found Silicon Valley the 8th out of 11 top rental markets in California. Image courtesy of RentCafe.

The San Jose region is one of the most expensive in the country for renters. Renters face an average market rent of $3,501 per month for a two-bedroom home, which requires a renter to earn $122,040 per year or an hourly wage of $58.67.

South Bay residents may fall short of being able to pay market-rate rent, according to U.S. census data. San Jose’s mean hourly wage was $47.81 in May 2021, and the median household income for residents between 2016-2020 was approximately $117,000.

“As interest rates are going up and the prices of homes are rising, these people who thought about buying are now going to be pushed into the rental market,” Ron Stern, owner of Bay Area Rentals, told thecupertinodigest.com. He said he does not agree rentals are seeing a high non-renewal rate, because renters are less likely to move if landlords keep annual rent increases “reasonable.”

Stern said demand within the rental market is largely drawing people from all over the country, often to new complexes with “very high” median prices. However, he said this year was less busy because people are more likely to stay where they are if they can work remotely, rather than pay to move to the Bay Area.

Ursula Murray, CEO of Marquise Property Management, said single-family home rentals are in high demand as potential buyers move into the rental market, even as rents have increased about 5% for the first time in three years.

She said she thinks people are returning to the Bay Area due to employment opportunities that do not allow fully remote work.

“It’s slow, but there are people returning in numbers we haven’t seen since before COVID,” Murray told thecupertinodigest.com.

However, others think the RentCafe study does not take into account a severe affordability crisis.

“This is not news for renters in Silicon Valley, who have been struggling with outrageous rents for 10 years now,” said Sandy Perry, president of the Affordable Housing Network of Santa Clara County.

Perry told thecupertinodigest.com some local officials have denied the housing crisis and how people become displaced, saying officials have promoted institutionalization and incarceration of homelessness while ignoring a “shameful racial disparity” among those displaced.

“People who claim that we cannot afford to provide even basic housing to our people lack social vision and moral compass, and appear committed above all to preserving the extreme privilege and inequality that characterizes the status quo,” Perry said.

Nuemi Guzman, a housing advocate for the Silicon Valley Law Foundation, said renters are also at risk if they live in low-income properties, where the foundation has received more reports of rent increases this year.

She said the study does not take into account the impacts on renters who can only afford to live in these units which may not have the same protections. Low-income properties are exempt from AB 1482—the state law protecting properties from high rent increases and unjust evictions—and local ordinances like San Jose’s, which allows an annual 5% increase cap and prevents unjust evictions.

The post Looking to rent in Silicon Valley? Get in line appeared first on thecupertinodigest.com.