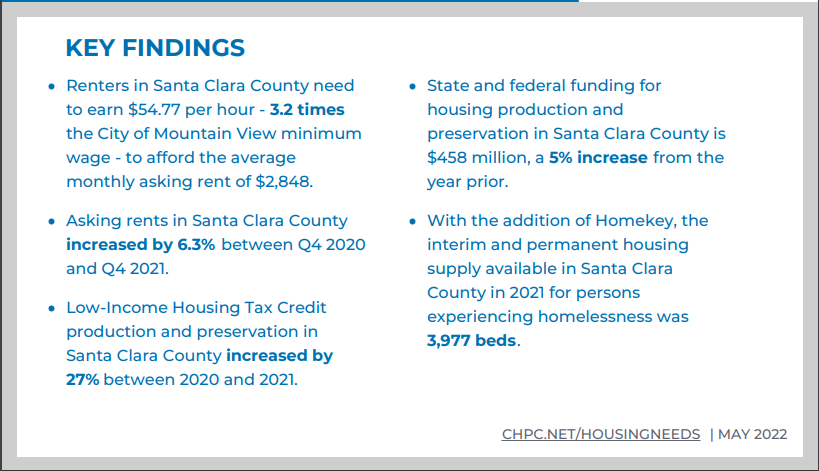 The rent burden grew heavier in Santa Clara County during the second year of the COVID-19 pandemic, and there’s no sign it will get any lighter this year.

Rents in Santa Clara County increased 6.3% between the end of 2020 and end of 2021, according to a recent report from California Housing Partnership, which provides housing policy solutions to nonprofits and public agencies. Renters in the county must earn $54.77 per hour to afford the average monthly rent of $2,848. San Jose residents earning the 2022 minimum wage of $16.20 per hour would have to more than triple their income to afford this rate.

“It’s really hard for low-wage and extremely low-wage workers to find a place to live in the communities they work and serve,” Tom Murphy, a spokesperson for SV@Home, a nonprofit that advocates for affordable housing, told thecupertinodigest.com. “The report shows it’s just getting tougher.”

Last year, the National Low Income Housing Coalition ranked San Jose the second most expensive rental market in the country. A statewide eviction ban and rental assistance program protected tens of thousands of county residents from losing their homes. But most of those protections ended earlier this year, and housing advocates say they’re seeing a growing number of residents facing eviction because they can’t pay their bills.

“We’ve had 13 non-payment cases in the last two weeks,” Karen Kontz, supervising attorney with the Law Foundation of Silicon Valley, told thecupertinodigest.com, adding this was three to four times greater than what she saw in pre-pandemic conditions. “It’s a huge increase.”

The rent burden is hitting low-income and non-white households especially hard. Roughly one-third of South Bay households aren’t self-sufficient, meaning they require government or community financial assistance to cover basic needs like food. The rate for financial assistance is 61% for Latino residents and 82% for non-citizen Latinos.

A table from the California Housing Partnership report on affordable housing issues.

Angie Evans, co-founder of the Palo Alto Renters’ Foundation, fears mounting rent hikes will drive people out of the county.

“A lot of folks who email us say, ‘I just got this huge rent increase, is it legal and can you help me find a new place?’” Evans told thecupertinodigest.com. “Almost every time we have to tell people there’s nothing in their price range anymore… it’s the low-income renters who are getting these high-ish rent increases, and then they’re leaving.”

San Jose: The second most expensive place to rent in the country

San Jose State University sociology professor Scott Myers-Lipton said the exodus of low-income residents out of the county is a crisis that isn’t being given sufficient attention.

“A Silicon Valley that wants to thrive needs to have people who want to work in all types of sectors, but they have to get paid enough,” Myers-Lipton told thecupertinodigest.com.

Exacerbating this problem is the fact that most Santa Clara County cities are behind on state obligations to build more housing for low-income residents, according to the California Housing Partnership report. San Jose, for example, is nearly 8,000 homes short of its regional housing requirements.

Mathew Reed, director of policy at SV@Home, said San Jose has made good progress on generating affordable housing, but has only moved forward with 22% of very low-income units it is supposed to develop, according to the most recent data from December 2020.

“Cities are supposed to create the environment in which it’s possible to build affordable housing,” Reed told thecupertinodigest.com. “Historically, we have fallen short because we struggle with land, we struggle with money and we struggle a lot with the local political courage and community will to support building it.”

Local governments have taken some steps to address this problem. The South Bay Community Land Trust just purchased a San Jose home to house homeless veterans. The trust is receiving support from the city’s housing department which plans to increase funding for land acquisition and rehabilitation from $5 million to $25 million.

Sandy Perry, president of the Affordable Housing Network of Santa Clara County, said incremental solutions such as stronger rent control and affordable housing bonds like Measure A aren’t enough to meet the overwhelming demand for cheaper rent and homes. He told thecupertinodigest.com he wants to see elected officials—especially those running for mayor—advance more powerful proposals to stop the exodus of low-income residents.

“I want to hear someone come out and say they’re going to find a way to have rents in San Jose be cut by half or more,” Perry said.