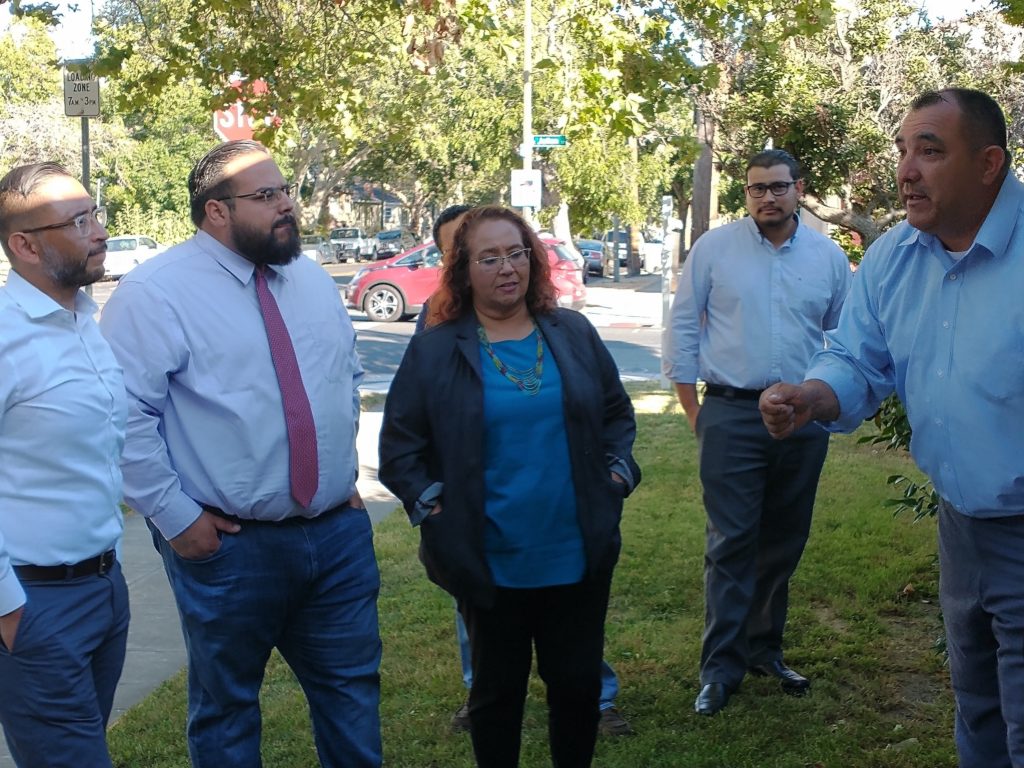 A group of advocates, residents and religious leaders is pushing San Jose to help establish a center to provide food, medical treatment and resources to find housing and jobs for the homeless population.

The coalition, headed by Lighthouse Ministries, hopes to buy a vacant building at 303 N. 15th St. that used to house the Apollo Adult Day Care and turn it into a one-stop-shop for homeless people in the city.

The building is currently in foreclosure and would cost $2.5 million to purchase, Lighthouse Ministries Pastor Ralph Olmos told thecupertinodigest.com.

“This is a new approach and a new solution to our issues here,” Olmos said, adding that the center will host several groups offering different types of services. “The problem is, where’s that money coming from?”

Olmos, whose church organizes free farmers markets on North 17th Street four days a week, envisions the facility as a food distribution center with a volunteer medical team who could provide basic health care needs and mental health services. Unhoused residents could also get help with housing applications and job training, as the coalition hopes to eventually house people at the location.

“This could probably serve hundreds on a weekly basis,” he said.

Coalition members say the center would be a game changer for the unhoused population in San Jose, where more than 6,700 people are sleeping on the streets, according to a tally this year. San Jose—and Santa Clara County—has seen its homeless population explode in the last few years. The population in the region has exceeded 10,000 people this year. San Jose Mayor Sam Liccardo called the crisis the city’s biggest failure, as city and county officials race to building more affordable and temporary housing to get people off the streets.

Shaunn Cartwright, co-founding member of Unhoused Response Group, said the building is the perfect spot for a homeless services hub. The vacant building is ready to move in with 20 rooms that could serve as offices and seven bathrooms—five of which are ADA accessible, she said.

“This location is central to so many camps in central, North and East San Jose,” Cartwright told thecupertinodigest.com, adding there has not been a collaborative grassroots effort like this before in San Jose.

Councilmember Raul Peralez, who represents the area where the building is located, declined to comment. Liccardo was not immediately available for comment about the effort.

Cartwright said the coalition is planning on hosting a fundraising barbecue this month to generate interest. Some members said they’re also exploring potential funding from the county and private entities in the city.

“This (building) has been an eyesore,” Torres told thecupertinodigest.com, adding he believes in Lighthouse Ministries’ vision of the property. “There is a strong need for wrap-around services for our unhoused community in this area.”

Santa Clara County Board of Education President and District 5 council candidate Peter Ortiz, who is also backing the effort, said the center would provide much needed services for families in East San Jose.

“It’s important that the city faces this problem head on,” Ortiz told thecupertinodigest.com. “It is the No. 1 issue that’s impacting local families and small businesses and residents throughout the city.”

Geneva Strickland, a formerly unhoused person involved with the project, said having multiple services under one roof would provide people with easier access to supportive services to find housing and hold down a job. The property is also accessible via public transportation.

“This would be a one-stop-shop that is very convenient for people who don’t have transportation or resources to go from one place to another,” Strickland told thecupertinodigest.com. “I really think this is the start of a whole new era.”