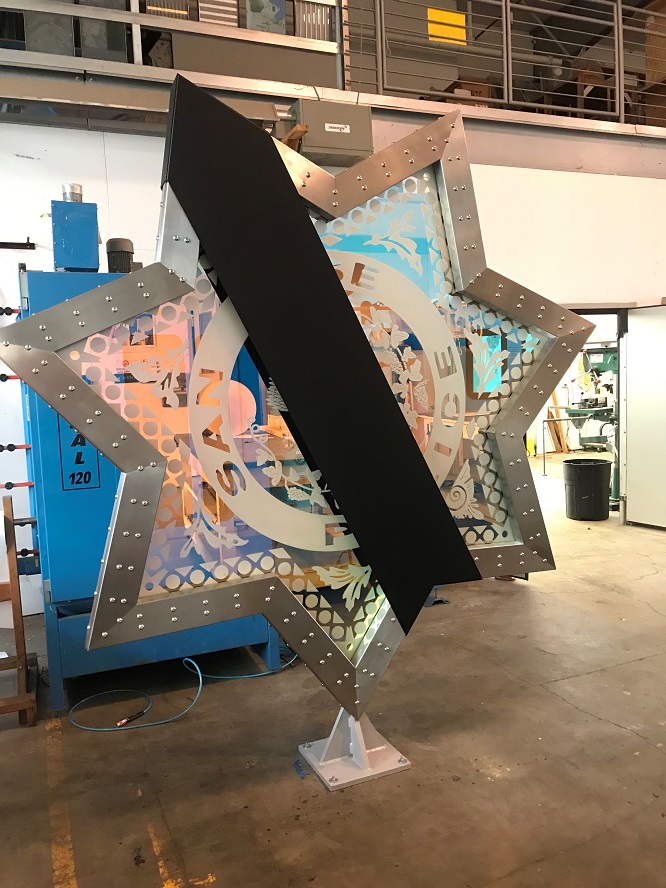 A new memorial that honors fallen police officers in San Jose is causing a stir for some who say it’s a slap in the face to families affected by police violence.

The sculpture, which will sit at the police administration building, commemorates the 13 San Jose police officers killed since 1924. It is expected to go up by the end of the year.

The End of Watch police memorial will showcase a seven-pointed police badge with a black band angled across it, a symbol often used by law enforcement agencies to mourn the death of an officer. The 96-inch badge is constructed out of dichroic glass, which changes colors and reflects light patterns on surrounding surfaces.

The completed fabrication of the memorial element. Photo courtesy of the City of San Jose.

The design, made by artist Gordon Huether, will be enclosed in shatter-resistant glass mounted in a metal frame on a concrete plinth. Each fallen officer will be recognized on an individual plaque around the base of the memorial, which allows for adding tributes.

Family members and advocates who have lost loved ones to police violence say the memorial ignores their plight and is a triggering monument for many.

“That’s not art a community needs for healing,” said resident Laurie Valdez, her voice cracking with emotion. Her partner, Antonio Guzman Lopez was killed by San Jose State University police officers in 2014. “It’s just going to trigger a lot of pain and anger and suffering and trauma because we haven’t seen any accountability. Where is the memorial for our loved ones? For the children who have had to grow up fatherless?”

Kiana Simmons, president and co-founder of HERO tent, an advocacy organization that started during the 2020 George Floyd protests, said the memorial distorts the reality.

“The police have killed nearly six times the amount of people since 1998,” Simmons told thecupertinodigest.com. “There has still yet to be an apology or any kind of public acknowledgement that the police got these deaths wrong. Why is that narrative ignored?”

Data gathered by HERO tent found at least 77 people in San Jose have been killed by police since 1989 and they believe there are many more they do not know of.

In the last century, nine San Jose officers were killed by gunfire — one of which was accidental, two in vehicle pursuits, one was electrocuted in a car accident and another in an aircraft accident, according to the Officer Down Memorial Page, a nonprofit that highlights officer deaths across the country.

The idea for a memorial was introduced in 2008, but stalled because of a lack of funding. In 2015 Mayor Sam Liccardo, Councilmember Raul Peralez and then-Councilmember Don Rocha brought the idea back after Officer Michael Johnson was killed while responding to a call of a suicidal threat. They and other council offices individually donated $126,500 from their council office budgets. The memorial is one of the more costly city-funded art projects in recent years — with a price tag of $468,000.

“SJPD supports this project and appreciates (its location),” Officer Steven Aponte, a spokesman for the department, told thecupertinodigest.com. “It will serve as a daily reminder to visitors and SJPD personnel of the sacrifice made by the 13 San Jose police officers who have lost their lives in service to their community.”

The city is working on landscaping and construction of the memorial’s foundation, Elisabeth Handler, spokesperson for the Office of Economic Development, said.

“Grieving is an important process for family members, friends, city residents and officers who have lost loved ones in the line of duty,” Handler told thecupertinodigest.com. “Memorials such as this can help with the grieving process; they provide a history or memory of the risk inherent in public safety, and honor those who have sacrificed their lives in service to the community.”

But Simmons and Valdez said the timing of the memorial is insensitive in light of the many SJPD scandals such as an officer caught drunk on the job, the lawsuits against SJPD for its actions during the 2020 protests and the calls to action by several community members for more accountability from the police department.

“It sends a very clear message that the city does not care,” Simmons said. “Councilmembers made a personal investment in preserving the image of policing, while hundreds of police recommendations are currently being sidelined. It begs the question: who is the city invested in keeping safe and who is seen as expendable? It’s pretty clear to me.”