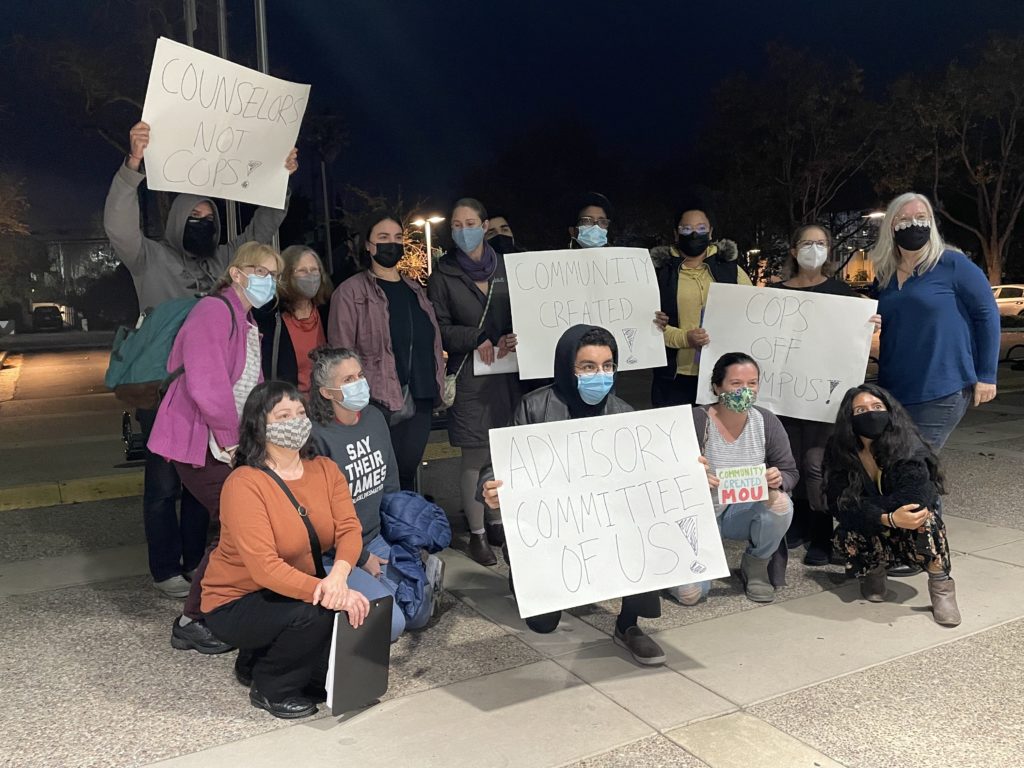 Despite activists’ best efforts, San Jose police officers will be hired to patrol campuses of the city’s largest school district for special events.

The San Jose Unified School District Board of Education unanimously approved an agreement Thursday with the San Jose Police Department that outlines how cops will be used on campuses as security for special events. Its previous agreement, approved in August, expired Friday.

The August decision to use officers as security came weeks after the board narrowly shot down an agreement in June with the police department to regularly patrol campuses during the school day and laid out what officers can and cannot do. The approval Thursday extends the new agreements indefinitely, subject to at least an annual review.

“I’m hopeful we can work together on a plan and really have the kind of dialogue and learning and community engagement that we have not had on this item,” said Board President Carla Collins.

The board also voted unanimously, with Teresa Castellanos abstaining, to establish a committee to oversee the district’s use of SJPD officers on campus, which will include two members of the board.

Castellanos voiced concerns that the agreement doesn’t have a definitive end date. She also worried the new committee would be “lost in bureaucracy” and pushed trustees to specify the committee’s expectations.

“I want to make sure what we are saying is real,” Castellanos said. “You can use progressive language to sustain the status quo. I’ve learned that in my own personal experience, and I want to make sure that is not the route that we go.”

The vote follows a months-long fight between anti- and pro-campus police advocates over police’s role in schools.

Following the approval of Thursday’s agreement, officers could be hired to provide security for school-related events such as sports events, school dances and graduations. Officers will not be used to supervise students during the school day.

“We welcome the opportunity to work with any of our community stakeholders,” Sgt. Christian Camarillo, spokesperson with the SJPD, told thecupertinodigest.com before the vote.

The district, with its own funds, will provide officers with de-escalation training and implicit bias training.

Students can have a school official present during interviews with the police. Permission from a student’s parent or guardian is required when they are released to the police, except in cases of suspected child abuse or neglect.

Police and district officials are expected to meet quarterly to evaluate the agreement.

Some residents Thursday called for entirely removing police from schools because uniformed officers can intimidate students, particularly minorities, and feed the school-to-prison pipeline —something the board didn’t consider in its vote. Supporters meanwhile said on-campus police are needed to report crime, secure campuses and prevent delinquency.

“We have parents, teachers, community members, students committed to the safety of all students, especially students most marginalized by our system,” Lori Catcher, a member Showing Up for Racial Justice, said. “I ask (the board) to take a clear stance and vote permanently to remove officers from campuses during the school day. Instead, invest the budget and resources in mental health and restorative practices.”

Activists celebrated in June after the board voted 3-2 to kick cops off SJUSD campuses. But the district brought police back two months later when it gave the OK for SJPD to work security.

“In a situation where a student is intoxicated and needs to be transported, if you have an officer who knows the staff and students on campus and is able to make a call to an ambulance with the sirens off, they can sometimes make that happen,” said Ben Spielberg, a spokesman for the district. “In a situation where you don’t have that, you might end up having a patrol car come, sirens all around. … The situation for students who might have emotional anxiety around police or reactions to police are going to be very different.”

A thecupertinodigest.com data analysis in July found a disproportionate amount of police visits were to high schools with high populations of minority students or students living in poverty. Lincoln High School and Gunderson High School, both in SJUSD, had the fifth- and tenth-most police calls, respectively.

“It’s important we show the district we’re keeping our eyes on them, specifically in terms of how they are handling issues that disproportionately and negatively impact students of color, like the memorandum with SJPD,” Tomara Hall, a special education teacher, told thecupertinodigest.com. “We need (the board) to look to the community to see what they’re willing to do to chaperone unarmed security officers. To pay teachers well to monitor students after school. … They need to do right by the kids.”