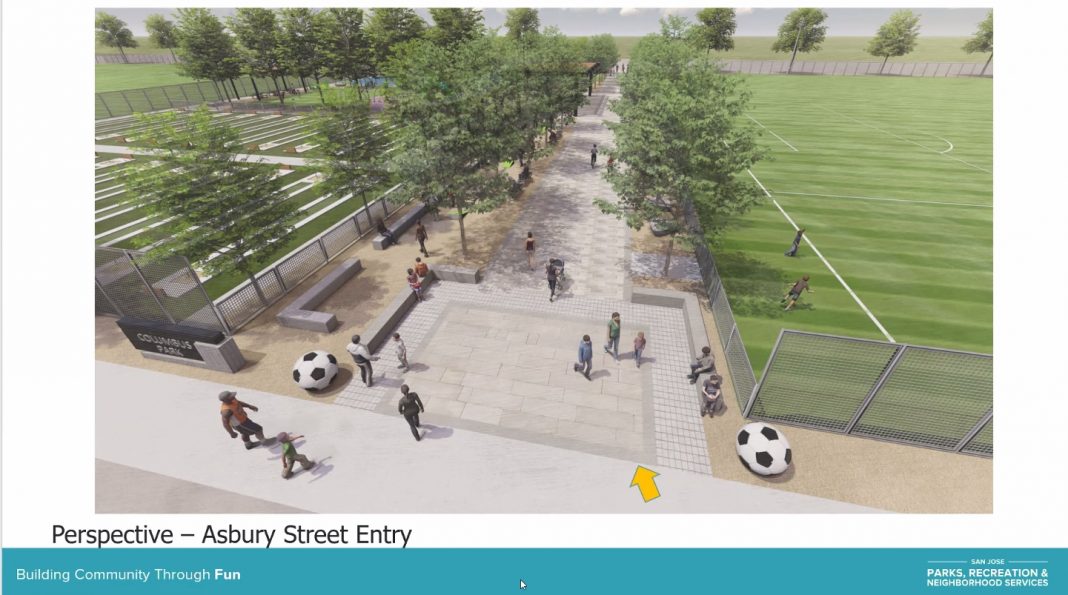 San Jose is moving forward on plans to reimagine and rename Columbus Park, near the location of the city’s largest homeless camp.

Through public meetings and surveys, residents are helping shape development of the 12.5-acre site, located at Asbury and Irene streets in San Jose. On Thursday, residents requested beautification, safe bicycle paths leading to the park, roller skating space and asked city officials about plans for keeping homeless individuals out of the area. The latter is a major hurdle in the reimagining process.

The existing park is separated by Spring Street. The location includes a softball field and basketball, horseshoe and volleyball courts. There is also a homeless encampment of more than 100 unhoused residents residing in the park. The encampment is plagued by rats after the city removed dumpsters to deter people from living there.

Columbus Park will offer a variety of sports fields and courts to attract the public. Photo courtesy of San Jose and RRM Design.

Chris Mastrodicasa, project manager for San Jose Parks, Recreation and Neighborhood Services, said the city is hoping once the site is renovated and in full use, the unhoused residents won’t choose to occupy it.

“The city is working on emergency housing, and we are doing our best to get those built as quickly as possible… it is something the city’s been taking very seriously, but it’s not an easy problem to figure out,” he said, adding park gates will close after hours.

San Jose wants hundreds of short-term homes, only 76 in the pipeline

The homeless encampment has been repeatedly swept after the Federal Aviation Administration threatened to withhold millions in federal funding if homeless people weren’t removed by June 30. Columbus Park is in the flight path of Mineta San Jose International Airport. Councilmembers on May 3 voted to extend the deadline to Sept. 30, pending FAA approval.

“It’s very unlikely that there will be enough adequate housing in time for the June 30 deadline,” said Becky Moskowitz, supervising attorney with the Law Foundation of Silicon Valley. “I’m very concerned that people will be forced out at that point with nowhere to go.”

Homeless advocate Gail Osmer is disappointed with the city’s lack of housing for homeless residents. She said a family with two children has been waiting for housing for months.

“They’re still out there and that is very, very wrong,” Osmer told thecupertinodigest.com. “They need help and the ball is being dropped.”

In April, the San Jose Downtown Association invited local officials, police officers, business owners and residents to  discuss solutions to the homeless crisis. Meanwhile, Santa Clara County is acquiring land to build hundreds of affordable homes in San Jose, Santa Clara and Morgan Hill, which will cost the county more than $17 million and provide 324 residences. San Jose is also working on efforts to house the homeless.

The new park design will feature a sign bearing its name, and synthetic softball and soccer fields on each end with an open paseo in the center. It will also include horseshoe and pickleball courts, multi-use sports courts for basketball and futsal, a mini soccer field and a play area for children.

The park’s name, however, may change. Christopher Columbus, the infamous Italian explorer, has fallen out of favor due to his exploitation of Native Americans. Last November, the San Jose City Council voted unanimously to remove a sculpture of Capt. Thomas Fallon from downtown, which depicts him raising the U.S. flag in San Jose in 1846 on what was then Mexican land. Residents drew issue with the statue because Fallon is seen as a colonizer.

The parks department surveyed the public in April about renaming the site. City planner Leo Tapia said of the 233 responses, 75% of people are in favor of a name change, and more than 85 potential names were submitted. Those who want to keep its existing name said they want to preserve history and their memories.

Residents will be asked to vote on a new name, once choices are finalized. The parks department will send a ranking survey to the public via email and social media in the coming weeks. Upon review, a recommendation will be made for a City Council vote. Councilmembers will ultimately decide whether to change the name or keep the old one.

Next steps in the park’s development include a presentation to the Parks and Recreation Commission in September and the City Council in November. Following bids and awards, construction is scheduled to start in summer 2024, with the park opening summer 2025.