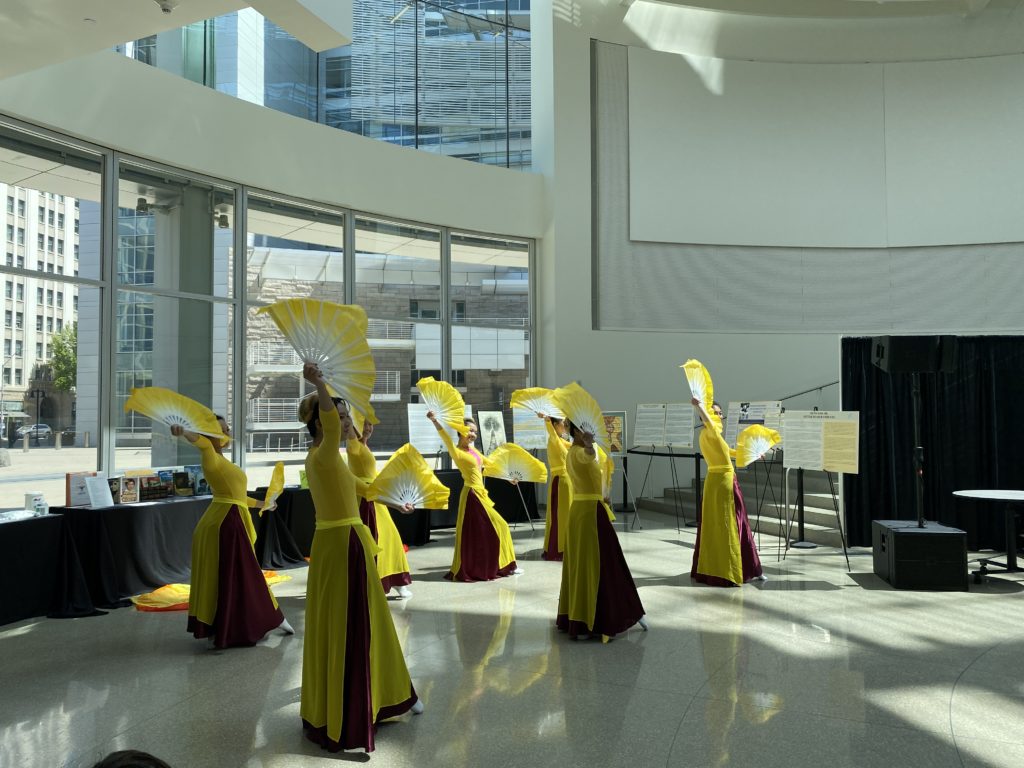 Dressed in black áo dài dresses and Vietnamese heritage flag accessories, more than 200 people gathered at San Jose City Hall Saturday to commemorate the anniversary of the fall of Saigon.

Known among the Vietnamese community as “Black April,” the ceremony is a somber reminder of the more than 2 million people who died during and after the Vietnam War that persisted for roughly two decades. The war ended on April 30, 1975 when the last U.S. troops left Saigon.

In San Jose, where more than 140,000 residents are of Vietnamese descent, this year’s ceremony also focused on building care and compassion through the stories of second and third generation Vietnamese Americans.

San Jose youth perform a dance at San Jose City Hall on April 30 in commemoration of the fall of Saigon and the end of the Vietnam War. Photo by Tran Nguyen.

The Vietnamese American Roundtable (VAR), a nonprofit focused on advocacy and education, hosted the event in collaboration with the Viet Museum, which houses the largest collection of items dedicated to Vietnamese refugees. Saturday was the first in-person Black April ceremony since the COVID-19 pandemic started.

The ceremony at City Hall featured several exhibits on Vietnam, photos depicting the journey of boat people who fled the country after the fall of Saigon and musical performances by young artists and students.

“This is the first time that the Black April program is dedicated to the youth and the next generation,” Philip Nguyen, executive director of VAR, told thecupertinodigest.com, noting previous programs focused on the stories of those who lived through the war. “It took us 47 years to get here, so to be able to do this in person is incredible.”

Hanh Le’s family has gone to every Black April ceremony since they landed in the South Bay more than 20 years ago. Le walked her six-year-old son Tayson through photos of Vietnamese families fleeing their country, of those who went through reeducation camps and of the first generation that landed in the U.S. after the war.

“It’s an important day to remember and reflect on the sacrifice many made so we can be here,” Le told thecupertinodigest.com in Vietnamese. “My son is too young to understand the weight of it, but we need to know our history to learn from it.”

The U.S. started sending troops to Vietnam after the North Vietnamese government, backed by the Soviet Union and China, defeated the French colonial administration in 1954. American troops aligned with the South Vietnamese government, and the conflict dragged on for two decades. After the fall of Saigon, more than 1.6 million people fled Vietnam, with many landing in the U.S. in the late 1970s.

“It’s supposed to be a sad event, but we shouldn’t hold onto the sadness,” Ruby told thecupertinodigest.com. “A lot of people, including my partner’s family, lost a lot. But looking at the kids now, they are all happy and thriving.”

Vin and Ruby Nguyen said Black April brings up conflicting emotions. Their daughter, MaiLinh, was part of a performance at the event. Photo by Tran Nguyen.

“We in the city of San Jose are the very grateful beneficiaries of the more than 100,000 Vietnamese Americans who have come here to enrich our city and make our city the great place that it is,” Liccardo said. “I’m enormously grateful to so many people in this room.”

Loc Vu, a war veteran and the founder of the Viet Museum, used to host Black April ceremonies before VAR started its program 10 years ago. He said it’s time for his generation to pass the torch to the next.

“This event has been excellent,” Vu told thecupertinodigest.com.

Not all Vietnamese residents spent Saturday looking back at history. In East San Jose, some decided to roll up their sleeves to help others.

A group of 30 volunteers with the Vietnamese National Association of Real Estate Professionals (VNARP) partnered with nonprofit Rebuilding Together Silicon Valley to help fix up the home of a low-income Vietnamese family. VNARP has done similar projects in the past.

“We grew up here in this city,” Janet Huynh, VNARP board member and organizer of the event, told thecupertinodigest.com. “It’s the right thing to help out our neighbors.”

Members of the Vietnamese National Association of Real Estate Professionals volunteered on Black April to fix up a home in East San Jose. Photo by Tran Nguyen.

“I waited a year,” Nguyen told thecupertinodigest.com. “I’m just so happy that people are here to help.”