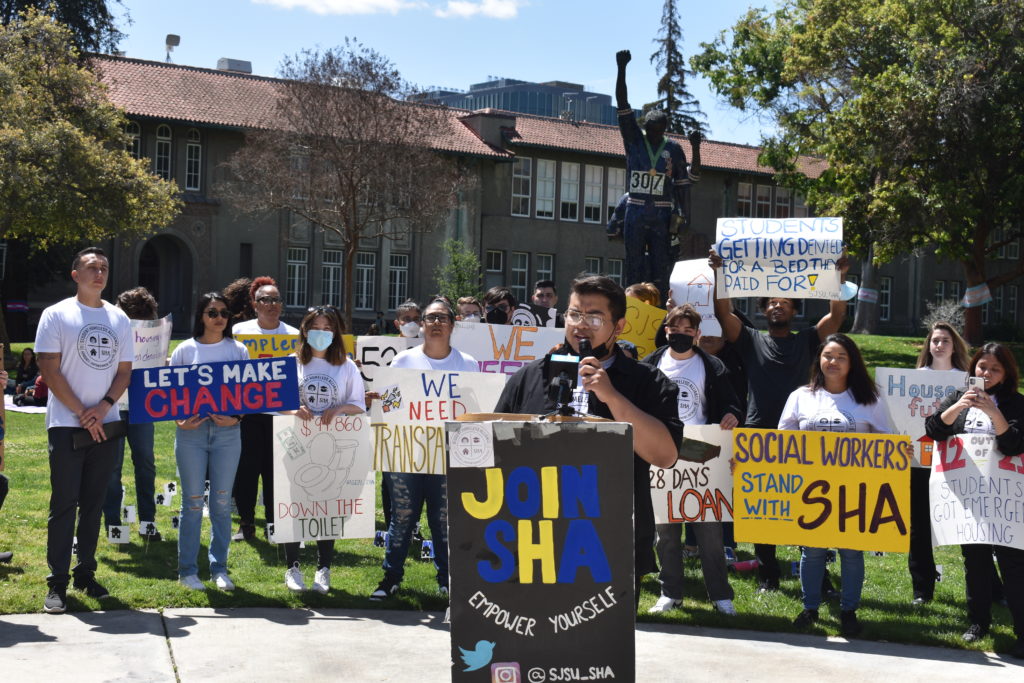 “Fight! Fight! Fight! Housing is a human right,” and “No more loans, give students homes,” shouted members of the Student Homeless Alliance as they marched across the San Jose State University campus on Wednesday. They stopped at places used by homeless students to shower or sleep, when something extraordinary happened.

SJSU Interim President Dr. Stephen Perez showed up at the protest—the first university president to do so. He said he was proud of the students for bringing these issues to light and is committed to making sure no student who requests emergency housing gets turned away.

“He is willing to work with us. He is at least more dedicated than the previous president,” Majano said. “We hope with more transparency from him, we will be able to finally make some real progress on these issues and this university can be much more accommodating for all our unhoused peers.”

How did housing homeless San Jose students in Airbnbs go?

The day before, Perez told students he would personally head the Basic Needs Advisory Committee. SJSU Cares—which provides resources and services for students facing financial crisis—recently updated its website to say students can use 12 emergency beds for 28 days rather than two days or possibly more.

“If there’s a 13th person that shows up, I’m going to find a bed for that 13th person and the 14th too,” Perez told thecupertinodigest.com.

A 2021 fall semester survey by SJSU Cares indicated 11.2% of 5,680 SJSU student respondents experienced homelessness at some point in the year. Only 213 of these students contacted SJSU Cares for assistance. Of these, 23 were housed through the Bill Wilson Center, 12 received emergency housing including hotel vouchers, 42 received a grant averaging $1,069 to retain housing, 96 received financial aid, a housing referral or assistance with leases and 40 discontinued the process.

SJSU Professor Scott Myers-Lipton said this is a huge victory for students. He said the new president appears to be open, engaged and is working to create a collaborative atmosphere.

“(Perez) heard them loud and clear,” he told thecupertinodigest.com. “Students are cautiously optimistic that the emergency bed program will now actually be used.”

Perez was provost and vice president of academic affairs at Sacramento State before he assumed the presidency in January. His appointment came after President Dr. Mary A. Papazian resigned following a sexual misconduct scandal by the university’s former director of sports medicine, Scott Shaw. The university agreed to pay $1.6 million to female student-athletes sexually harassed by the trainer.

In December, Papazian had agreed to extend the use of the emergency beds, but the university never provided an agreement in writing and students were still asked to take out loans after two days, said Lana Gomez, former Student Homeless Alliance president.

The Student Homeless Alliance wants the first question SJSU Cares asks students to be: “Do you need a bed on campus?” The alliance is pushing to have the SJSU Cares website say students don’t have to maximize their loans to receive assistance. It wants students to get a bed without consideration of their loan status and have loans replaced by grants and rental assistance.

Majano said Associated Students, a campus nonprofit which advocates for students and provides funds for student activities, gave almost $100,000 to fund the emergency bed program during the first semester of 2021 because “the university wasn’t willing to provide adequate support.” The university said it covered the funding during the second semester and will do so going forward.

According to SJSU Cares, only one student used an emergency bed from the university’s 12-bed pilot program as of Oct. 14, 2021.

“How can there be 4,000 students that identify as homeless on this campus and not one emergency bed is being used right now?” Myers-Lipton said. “It makes no sense.”

Majano said a lack of advertising from the university as well as vague language led to this low turnout and more needs to be done. Students are unaware of just how big an issue homelessness is at the university, and even less are aware of SJSU Cares or the Bill Wilson Center, he said.

Student Homeless Alliance members march through the San Jose State campus to raise awareness of the need for safe places to sleep. Photo by Lorraine Gabbert.

“They pay so much for tuition and sleep here,” she said standing in front of the student union.

Perez told thecupertinodigest.com the university needs to commit its energy and resources to providing that assistance.

“The ultimate goal is every single one of our students who comes here knows that we care about them,” he said, “and is supported in ways that they need in order to thrive.”