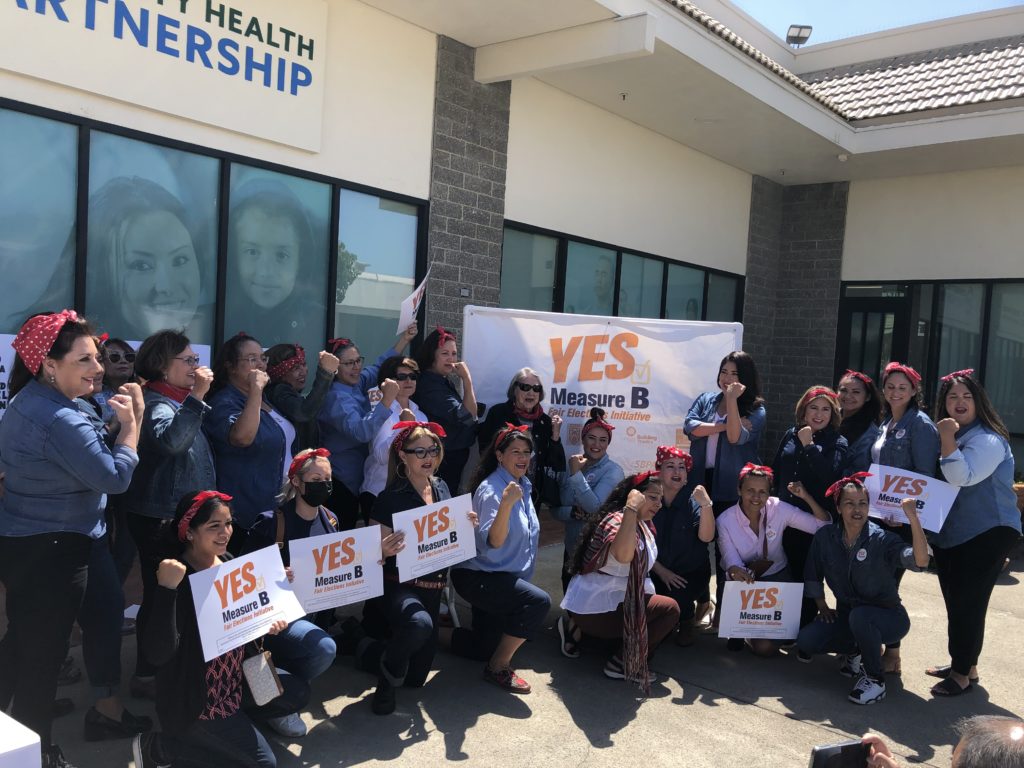 Latina leaders want one San Jose election to change its date, which they say would level the playing field for political equity and access for people of color.

Local politicians and community leaders wearing Rosie the Riveter red bandanas held a rally Tuesday to urge the city’s Hispanic residents to vote “Yes” on Measure B for the June 7 primary election. If passed, the ballot measure would move San Jose mayoral elections to coincide with presidential election years.

Measure B was born out of the San Jose Charter Review Commission in an effort to increase voter participation. The ballot measure only needs a simple majority to pass. The City Council formed the 23-member commission in September 2020 after a split council grappled with Mayor Sam Liccardo’s “strong mayor” initiative to give his office more executive power. The commission made numerous recommendations, including the failed suggestion to switch to ranked-choice voting.

A study conducted by two San Jose State University political science professors found voter participation would increase by 30%, particularly among Asian and Latino voters, if the mayoral election coincided with the presidential race.

Latina political and community leaders held a rally on May 17 to bring attention to Measure B. Photo by Lorraine Gabbert.

Maria Fuentes, who served on the Charter Review Commission, said the Latino community should vote for Measure B to avoid future inequities like those experienced during the COVID-19 pandemic.

“There is so much injustice here in Silicon Valley that we endure,” she said, “and this is one way to get more people involved and our voices and votes counted… We, as a community, must take advantage of the opportunity to change the voting process so that more people will be able to have a voice in who becomes elected as our mayor.”

Gabriela Chavez-Lopez, executive director of the Latina Coalition of Silicon Valley, said Measure B would dramatically increase voter turnout. She said in comparing the past three presidential elections with primary elections, there’s a 150% increase in Latina voter turnout in presidential years.

“For working women and women of color, this is a really great opportunity to increase our voices,” she told thecupertinodigest.com.

Gabriela Chavez-Lopez, executive director of the Latina Coalition of Silicon Valley, and Rosie Zepeda, a community college spokesperson, channel Rosie the Riveter at a “Yes on Measure B” rally. Photo by Lorraine Gabbert.

Not everyone’s on board

But not everyone is in favor of making the change. Mark Hinkle, president of Silicon Valley Taxpayers Association, said its board concluded putting Measure B on the ballot would cost more money and potentially allow the next mayor to serve for 10 years rather than eight.

“Most voters want term limits and 10 years is just a bit too long,” he told thecupertinodigest.com. “In Santa Clara County, once elected, they pretty much stay elected.”

When the City Council approved putting Measure B before voters, Councilmember and mayoral candidate Dev Davis dissented, saying spending $617,000 to put it the ballot was wasteful.

“If we want money to matter less in elections, we should not change the mayoral election cycle,” Davis told thecupertinodigest.com. “Also, we have better discussions about local issues when it’s not a presidential election year.”

Rich Crowley, co-signer on “No on Measure B” and board vice president of Citizens for Fiscal Responsibility, said Measure B is designed to put together a 10-year run for mayor. He said if Measure B passed, mayoral candidates would have to work harder to garner attention and residents might not pay as much attention to local issues.

“The issue was brought up by the Democratic Party and local labor unions,” he told thecupertinodigest.com. “I most often didn’t find a time when they didn’t do something to benefit their political fortunes. I believe what they see is by switching it, they will forever and ever control who is mayor in the city of San Jose.”

“We have to recognize that the country is on fire by political divisions, political arsonists and political extremists,” she told thecupertinodigest.com. “We have had struggles throughout the decades in our attempts to achieve equality and social justice. And we have fought the hard battles. Now, the lives of future generations are very much at stake.”

Quincy Cabreros, a political science student at DeAnza College who attended the rally, said people in the community don’t pay attention to local elections even though they matter.

“Local elections are important because it’s a trickle-down effect,” Cabreros told thecupertinodigest.com. “The small victories in your own community can echo into the halls of Congress. The people in power need to see that the people on the ground, the working-class people, have voices.”