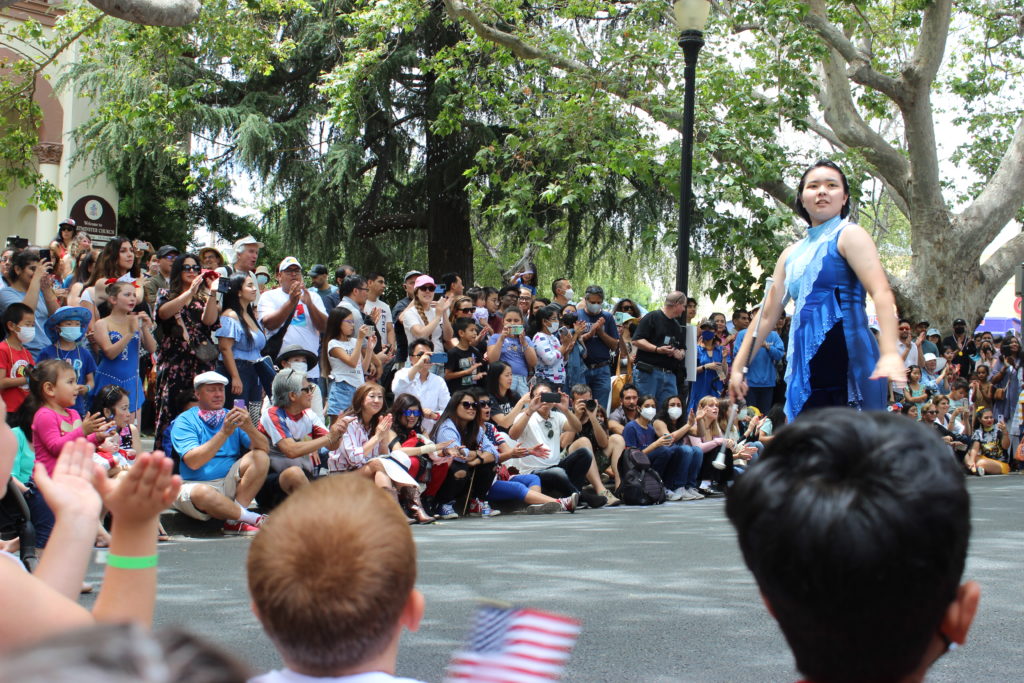 San Jose’s oldest Independence Day parade is not only a favorite among local residents, but also small businesses.

The Rose, White and Blue parade and festival has been around since 1901, drawing hundreds of people every year. A decked out parade filled with lowriders, classic cars, patriotic floats and festive vehicles grace Alameda and Naglee avenues. On the other side of the street, local vendors, artists and designers share their crafts. And in between are cultural performances, food trucks and even a wrestling ring and mini skate park for children.

Walking through it’s easy to spot stars, stripes and smiles — the biggest ones coming from some of the vendors, local restaurants and cafes. And as the region struggles to recover from the COVID pandemic that battered entrepreneurs and small businesses, the infusion of foot traffic and spending is a small boost to the local economy.

A Valley Baton dancer performs at the Rose, White and Blue Parade in San Jose. Photo by Jana Kadah.

“This is an awesome opportunity,” local painter Francisco Ramirez told thecupertinodigest.com. “San Jose has so many pockets and communities, but events like this bring everyone together.”

Ramirez, a San Jose resident for more 30 years, said it was his first time being a vendor at the rose parade. He was enthused with how many people were stopping by his booth, checking out his art and making a purchase.

Francisco Ramirez tells customers about his art at the Rose, White and Blue Parade. Photo by Jana Kadah.

It’s not easy for artists like him to live off their craft in San Jose, Ramirez said. There aren’t many galleries or large events to provide high-levels of exposure. Events like the Culture Night Market or First Fridays in the SOFA district help – but none have as big of a reach as this parade, he said.

“We need more artistic beacons out there that will help us expose ourselves and this is one of those beacons,” Ramirez said. “Even if someone doesn’t buy right away, I see clients coming back, they do some more research and buy something.”

Cris Naba, who makes beaded earrings, keychains and other jewelry, echoed the sentiment. She said this was her first time at the Independence Day parade and has never experienced anything like it.

“This is probably by far my best event of the year and I’ve been doing pop ups every week,” Naba told thecupertinodigest.com. “I can’t even tell you how much I sold. Every time I try to count it up, another customer comes up to me.”

Making jewelry is a passion for Naba, but it also helps her pay tuition at Cal State East Bay where she is getting a degree in English literature. The end goal is opening up a boutique, so opportunities like this help build up her clientele.

“At other events I sometimes don’t even make back the registration fee I paid to be here,” Naba said. “Today, I made more than that in the first hour.”

Cris Naba sells her jewelry at the Rose White and Blue Parade. Photo by Jana Kadah.

The parade closes various streets near Hanchett Park. It would typically be a headache for shops that line The Alameda, but on Fourth of July, its a welcomed rush, said Wendy Wang, who runs China Inn restaurant.

“We do not open on Mondays but for this event, of course we do,” Wang told thecupertinodigest.com.

She said luckily for her, the pandemic did not impact her business as much because of take out orders. But seeing so many people walking the streets was a hopeful sign. Despite being open since 2008 and having lots of regulars, Wang said the parade introduces her to so many new customers as well.

“It really means so much to see so many new faces and seeing the cafe full,” Sanchez told thecupertinodigest.com. “The pandemic hit all of us hard and this feels like we are back to normal.”