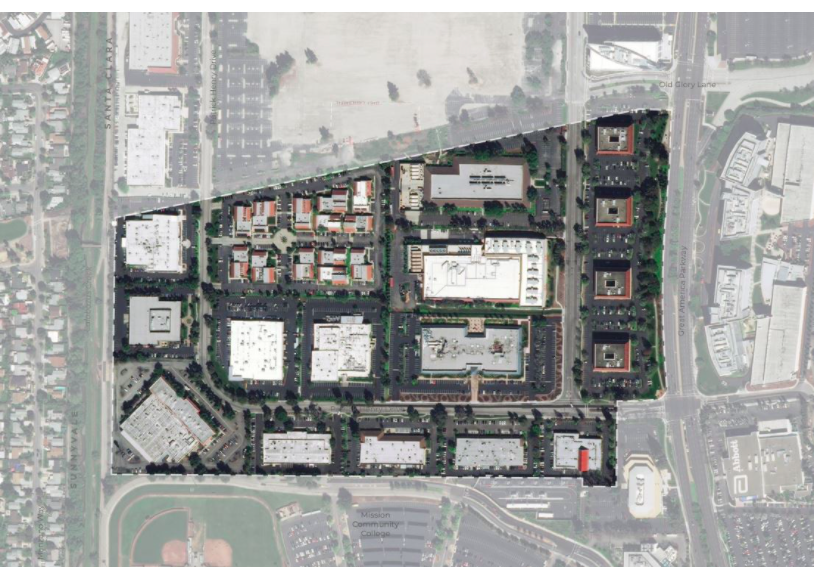 The Santa Clara City Council voted unanimously this week to approve the Patrick Henry Drive Specific Plan, which changes the zoning of an area bounded by the Hetch Hetchy pipeline right-of-way to the north, Mission College on the south, Great America Parkway to the east and Calabazas Creek to the west.

The rezoning will permit high density housing — ranging in heights from 5 to more than 12 stories — in an area that is predominately light industrial.

The new zoning will permit housing density ranging from 50 to 250 homes per acre. Of the new homes, 15% are expected to be affordable, with households earning between 50% to 120% of the area median income.

The plans for the new neighborhood would set aside about 10 acres for parks. The new zoning also includes designations for a commercial “main street” area and a possible library or recreation center, plus bike and pedestrian trails that connect with the existing local trail network.

The council on Tuesday also voted unanimously to approve new infrastructure fees for this area: $21 per square foot of office space and $9,626 per new residential unit, aimed at covering the roughly $105 million in new infrastructure costs the new development is expected to cost. The fees are expected to be adjusted annually to keep up with construction costs and inflation.

The City Council voiced concerns about expected traffic from the new development. While the area is close to the Tasman light rail line, there is also a planned shuttle service to help residents avoid driving. The council wanted more information about how it would work.

At the request of Councilmember Suds Jain, the council will mandate that developers take extra consideration of bird safety in their building designs, that bike storage rooms at new housing buildings have plugs to charge e-bikes and video security protection, and to remove language describing the possibility of a road connecting to Mission College Boulevard because the proposal was rejected by the Mission College board of trustees.

Jain requested an increase in the transportation demand management efforts from developers to curb solo car trips. Developers pushed back against the idea, saying it could render their projects infeasible.

“Santa Clara has much lower requirements for traffic mitigation than other cities around us,” Jain said during the meeting.

Councilmember Raj Chahal supported Jain’s suggestion. “Traffic is the top most concern of our residents, and if we don’t take preventive measures as such, then it will be getting worse,” he said.

James Suh is representing 4590 Patrick Henry Drive. He encouraged the council to be “cautious about adding costs to what is the most expensive building market in the country, if not the world, and risk potentially making it untenable for us to proceed.”

Mayor Lisa Gillmor offered her support and said she’s eager to see it approved, after watching it develop over the past four years.

“Everyone that has really opined on this specific plan has produced a really well-balanced and really aspirational plan for our city,” she said.

The housing prices in the area are absurd, she added.

“It’s just gotten so out of control, and this is our way of really addressing the needs of so many people that need this product,” the mayor said. “Let’s get this going and not nitpick it, because everything you add on just adds to the price of housing.”