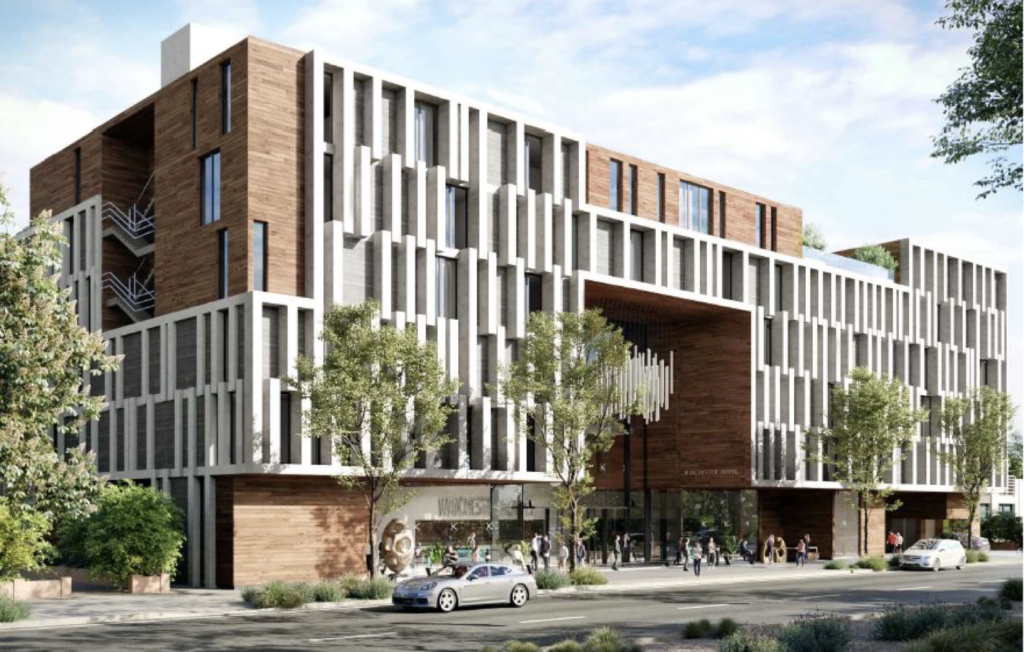 Despite fervent community opposition, a six-story hotel is coming to Winchester Boulevard in West San Jose.

On Wednesday, plans for a 119-room hotel on a 0.69-acre parcel at 1212 S. Winchester Blvd. was approved at a Planning Director’s hearing. The approval includes the demolition of two single-story commercial buildings and nine trees. The proposal quietly came back for special permit approval after the plans were withdrawn at a San Jose City Council meeting in January.

Since the city approved the rezoning and environmental clearance for the development in January, the developer was able to go straight to the planning director for final approval.

Before that could happen the City Council directed the developer, San Jose dentist Dr. Adam Askari, to re-engage with the community so plans were more aligned with resident concerns.

But in those two months, little in the plans have changed.

Tom Morman, a resident of the Hamann Park neighborhood, said he and other residents were incredibly disappointed, but not surprised.

“We thought we had very legitimate concerns, but they were glossed over by the developer and city staff,” Morman told thecupertinodigest.com. “The neighbors are devastated.”

Residents who have been active in the process believe the hotel is an oversized, ill-fit project that would impact safety, traffic and day-to-day life of residents.

“It just doesn’t fit in with our fabric of our neighborhood,” said Vince Navarra, president of the Hamann Park Neighborhood Association. “These are single-family homes with people living here since 1950, 60’s and 70’s.”

A rendering of the proposed Winchester Hotel in San Jose. Image courtesy of San Jose.

The hotel will sit on Winchester Boulevard, which is a major traffic artery that cuts through San Jose and connects multiple cities from Santa Clara to Los Gatos. Several of its intersections, such as Hamilton Avenue and Stevens Creek Boulevard, become congested during rush hour. These intersections will bookend the location of the proposed hotel.

According to the plans there is no room for fire lanes, adequate parking or for the Ubers and Lyfts pick ups at the hotel, or for bike lanes, Navarra previously told San Jose Spotlight.

During public comment, residents said many exemptions were made for this hotel, including the building’s height. But the permit for the project shows that building conforms to the required height limit at 64 feet.

“It maximizes the developer profit, but adds to the congestion,” Morman said. “That’s our whole point, this is inappropriate.”

Morman said while they met with Askari multiple times to address some of the residents’ concern, submitting the proposal for approval without their knowledge was an act of bad faith.

The 6-story hotel on Winchester Boulevard will be built on the site of commercial buildings that used to be single-story houses. Photo by Jana Kadah.

Askari said he has already made several concessions, noting part of that was to create wider sidewalks requested by residents.

“After having many meetings with residents, my understanding is their opposition is really against urban village plans, not the hotel,” he said.

Residents who spoke out at the hearing said they don’t oppose urban villages—just the proposed development of this hotel.

“We’re aware of the city’s economic goals and tax base objectives and very much support San Jose’s efforts to attain some balance,” resident Gail Morman said. “But this site stands out as inappropriate. Hotels are more fitting close to the Santana Row.”

Deputy Planning Director Robert Manford said everything is in conformance with the general plan.

“(Residents) have very valid concerns and issues with regards to the projects,” Manford said. “But it meets all the requirements so I’ll go ahead and approve it.”

Although the project was approved, residents can appeal before the San Jose Planning Commission within 10 calendar days.

Morman said he is confident the neighborhood will appeal the project.

“There’s no point not to do it,” Morman said. “It’s just right now we’re pretty tired and exhausted from fighting for this.”