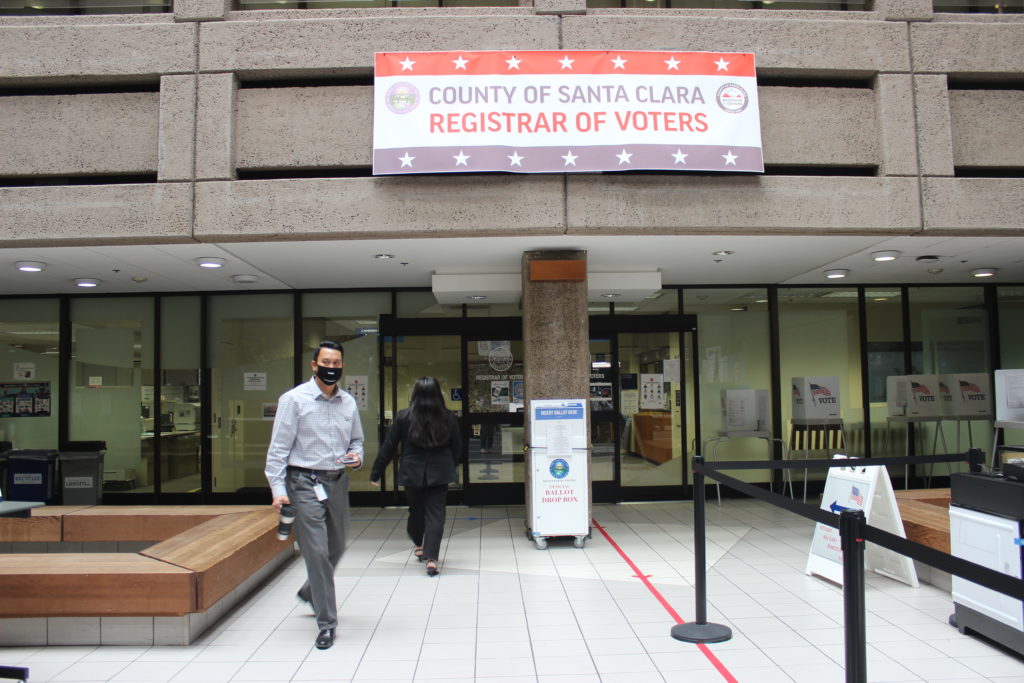 Although the 2020 election was filled with fears and fallacies, Santa Clara County election officials say there is nothing to worry about here.

With less than one month until the June 7 primary, several measures are in place to ensure a safe and accurate election cycle. This week the Registrar of Voters released a security report to share the steps the office has taken to safeguard elections to ensure public trust.

“There has been and continues to be a lot of misinformation and disinformation throughout the nation, but I will speak for Santa Clara County,” said Shannon Bushey, registrar of voters. “All parts of our process are very transparent and we are here to have observers and the public come in and learn about what we do.”

Registrar of Voters staff walk through the office building. Photo by Jana Kadah.

The last few elections in the county have drawn criticism from different groups. In 2016, the integrity of a recount in North San Jose’s District 4 was questioned after some ballots allegedly went missing. In 2020, violence at some voting locations with accusations of ballot box tampering and fraudulent elections rhetoric left many unsure of the process. And in 2021, Oregon authorities convicted a Monte Sereno councilmember for voting illegally in both that state and California.

Bushey said most of the processes have stayed the same because those laws are tested and true.

“We have always followed the laws and regulations. We have always had an audit in place before and after an election,” Bushey told thecupertinodigest.com. “I am very confident in all these years.”

Staff at the county elections office demonstrate how to vote using the digital voting booths or on a newly printed ballot in different languages. Photo by Jana Kadah.

But there have been some changes. This year, the Registrar of Voters will have paid security at voting centers, voters will have to maintain more distance between each other and some observer rules have changed.

“People were really more enthusiastic from the 2020 election, but also more vocal and physical,” Evelyn Mendez, public and legislative affairs manager with the Registrar of Voters, told thecupertinodigest.com. “We had people touching our staff, and grabbing all of our Sharpies, saying the elections were illegal and throwing them. So we wanted to make sure our voters and our staff felt safe.”

The elections office has also incrementally changed the way it processes ballots since 2016 when a close primary race in San Jose’s District 4 between Lan Diep and incumbent Councilmember Manh Nguyen led to a recount. Diep ended up winning, however Nguyen questioned the election integrity when the ballot count changed from 20,334 to 20,079, according to an opinion piece he wrote at the time.

Matt Moreles, assistant registrar of voters, explained some ballots were lost in the recount most likely because those were duplicated ballots. Ballots that may be ripped, have stains or other damage are duplicated on a clean ballot to be counted through the machine. But when they went to do the recount, those ballots couldn’t be matched to the original, Moreles said.

“It was definitely unfortunate, but the good thing was the number of ballots we’re talking about is smaller than the overall margin of victory,” Moreles told thecupertinodigest.com. “In that instance, it really didn’t make a difference to the outcome of the recount or that election, but it was something that was a learning experience for us.”

A resident volunteers to show how digital voting booths work at the county elections office. Photo by Jana Kadah.

Moreles said the office retooled the ballot inventory process and created a new in-house inventory tracking program and other quality control steps. He added the county also invested in more physical security to ensure adequate access controls and prevent people from entering areas where ballots or counting equipment are stored. Staff received anti-phishing and cybersecurity training, and all the equipment that goes out to vote centers has tamper evidence seals.

“We keep a very detailed chain of custody logs and that whole chain is documented,” Moreles said. “We also work with technical security experts to make sure that our network infrastructure is super secure and that we’re up to date with best practices in terms of firewall, and other protections.”