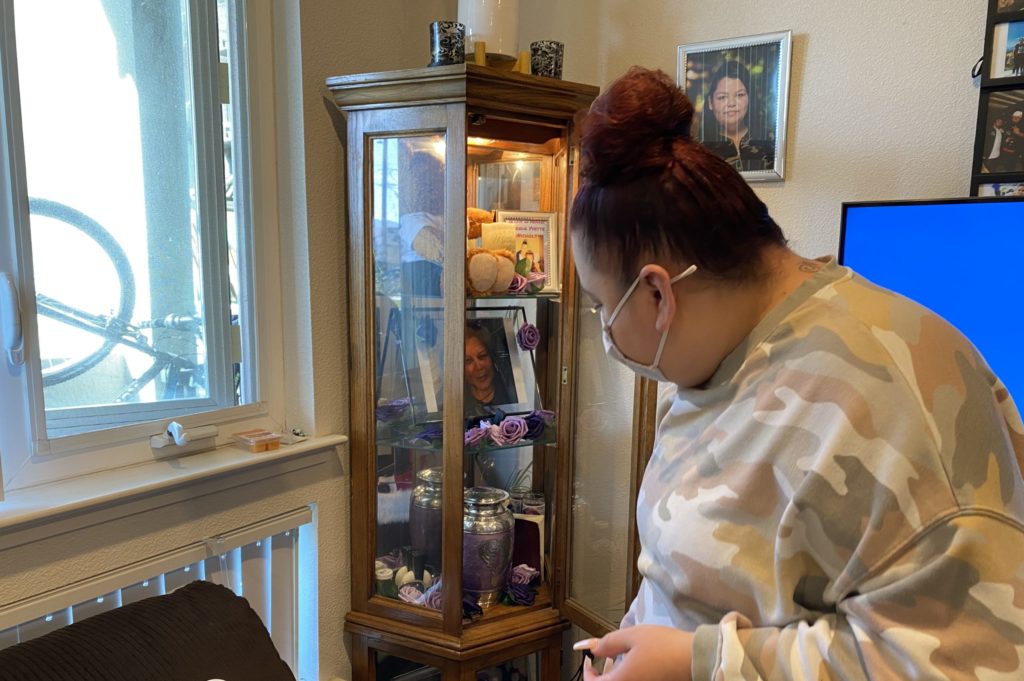 Struggling to make a living and plagued by abusive relationships, San Jose native Brenda Nichols fell into alcoholism and homelessness where she spent the last 10 years fighting for a way out. In 2019, she finally qualified for housing and was ready to turn her life around. But years of drinking and living on the streets finally caught up with her.

She never made it, dying in December 2020 from a blood clot in her throat at age 55.

Nichols leaves behind her grieving daughter and grandchildren with photos of happier times, her rosemary cross and a voicemail saying she loved them. Nichols is part of the silver tsunami, where seniors over 50 are falling into homelessness and lost in the cracks of society at an alarming rate.

“My mom would have stayed alive if the county and the hospitals had helped her when she needed them,” daughter Angelina Guzman Rodriguez told thecupertinodigest.com earlier this year through tears. “I didn’t even get to say goodbye. I couldn’t be there for my mom.”

Angelina Guzman Rodriguez set up a place dedicated to her mom in her Gilroy apartment. Photo by Tran Nguyen.

Nichols was among 145 homeless seniors who died in Santa Clara County between December 2020 and November 2021—a record high number as the region witnessed 250 homeless deaths over the same period. The silver tsunami phenomenon is growing, advocates said. Their demographic comprises 58% of the unhoused population in Santa Clara County—at least 50 years old—who died so far in 2022.

The homeless population has grown older in Silicon Valley in recent years. According to the county, people who are at least 51 years old accounted for 40% of the unhoused population in 2019. As the housing crisis—exacerbated by the COVID-19 pandemic—continues to drive up rent and exhaust local safety nets, advocates said more seniors are falling into chronic homelessness, and they can’t get out. Surviving on the streets has taken a toll. Many have turned to alcohol, drugs and at times suicide—all factors contributing to rising death rates.

Residents stood in somber silence at a memorial for people who died on the streets of Silicon Valley in December 2021. Photo by Tran Nguyen.

Santa Clara County, one of the wealthiest areas in the country, is racing to address a homeless crisis that has exploded in the last several years with more shelter beds and supportive housing, Deputy County Executive Ky Le told thecupertinodigest.com.

“The problem is the lack of permanent affordable housing for people who are older with health conditions or disabling conditions,” Le said. “The solution is to get more housing out there.”

The county recorded 9,706 homeless individuals in 2019, and this year’s tally is being analyzed. Data recently discussed at a meeting hosted by the county’s Office of Supportive Housing reveals more than 30,100 homeless people sought assistance in the South Bay in the last six years.

Flush with an unprecedented amount of cash coming from Measure A’s $950 million housing bond passed by voters in 2016, the county is funding thousands of affordable homes, including 1,800 permanent supportive units that would target older adults with health issues. So far, 478 supportive units have been completed.

“We can continue to build on what we are doing,” Supervisor Susan Ellenberg told thecupertinodigest.com. She added the county is investing $40 million in housing for older adults with cognitive and developmental disabilities.

Angelina Guzman Rodriguez said her mother battled with alcoholism and homelessness for years before succumbing to her illness. Photo by Tran Nguyen.

But challenges facing the senior population are also beyond the housing crisis, advocates and experts said. Many seniors don’t have any life savings and rely on social security checks that barely cover their food and basic needs. They are further burdened with physical and mental illnesses that come with old age and living on the streets.

This was Nichols’ plight. She suffered from thyroid disorder and cirrhosis of the liver. She went to emergency rooms several times where she was turned away before she succumbed to her illness, Rodriguez said.

Even when a senior gets into affordable housing, they likely need further subsidies and supportive care.

“If they’re frail and vulnerable, or if they’re suffering from health issues later in life, I think they’re going to need even more help once they’re in housing,” said Ray Bramson, chief operating officer of Destination: Home and thecupertinodigest.com columnist.

Nichols’ younger sister, who’s in her 40s, was also homeless in San Jose but was fortunate to find housing, Rodriguez said.

“What’s the difference between them?” Rodriguez said. “I feel like they just pick and choose who they want to help.”

Ronnie Martinez and his mother Linda have been homeless for years. After suffering from seizures, Linda, 73, was discharged from the hospital back to the streets with nowhere to go until advocates intervened. Photo by Tran Nguyen.

Alpana Agarwal, founder of nonprofit Helping Hands Silicon Valley, said the lack of care for seniors has also fueled the lack of trust among the population.

“They have seen so many broken promises,” Agarwal told thecupertinodigest.com. “They have been disappointed so many times that some now refuse help.”

She is working with Rose Gregorio, a registered nurse and homeless advocate in Sunnyvale, to help a mother-son duo who has been unhoused for years.

Linda Martinez, 73, was hospitalized in Sunnyvale recently due to seizures, but she was discharged back to the streets with nowhere else to go. Her adult son Ronnie, who is also homeless, has mild autism. They were already on a waiting list to get into a local shelter, but the facility wouldn’t take them citing a capacity issue, Gregorio said. They’re staying in a hotel after Gregorio started a GoFundMe page.

“It should not take four or five people, pulling our own connections, to get help,” Gregorio told thecupertinodigest.com. She has pushed county and city officials to intervene with no luck—calling only to have the county’s homeless hotline ring on with no one answering.

Ronnie Martinez with Rose Gregorio, a registered nurse and homeless advocate in Sunnyvale. Gregorio set up a GoFundMe to help Ronnie and his mother pay for a motel room. Photo by Tran Nguyen.

Linda Martinez, visibly shaking at the thought of being homeless again, said she only gets $1,006 a month from social security checks.

In Gilroy, Rodriguez now spend her days wondering how she could have done more to save her mother. She recently took her two teenage daughters, Alexis and Allisa, to a nearby park to celebrate Nichols’ birthday.

“My mom used to sit at this gas station in San Jose,” Rodriguez said. “I still look for her whenever I drive by.”