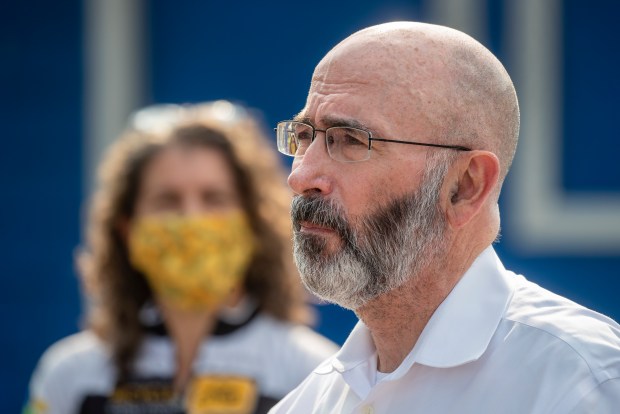 A new report puts a price tag on the controversial local history book commissioned by Santa Clara County that turned out to contain paragraphs copied nearly word-for-word from online sources: over $1 million in taxpayer money.

And an email obtained by this news organization, which first discovered the copied paragraphs, sheds light on how county officials circumvented competitive bidding rules to steer the book project to the wife of a former county supervisor. County Executive Jeff Smith now concedes the project should have been competitively bid.

The revelations deepen the scandal surrounding the book, an intended history of Santa Clara County government written by Jean McCorquodale, the wife of former supervisor and state Sen. Dan McCorquodale. Jean McCorquodale had previously provided pricey grant-writing services for the county but had no experience writing a history book.

Supervisor Otto Lee ordered an inquiry into the book following the June 6 publication of an article revealing McCorquodale’s work for the county and a subsequent story detailing the apparent plagiarism. Those stories revealed that McCorquodale had made at least $2.4 million over a decade of work for the county, but public records did not make clear exactly what portion of that was paid for the book.

A separate investigation into the copied paragraphs is now underway in the county counsel’s office.

“In hindsight, these historical book writing services should have been put out to bid, as the experience and skills needed to be a highly effective grant and technical writer for and about County government do not necessarily translate to the production of a comprehensive historical book,” Smith wrote in the two-page report released on Wednesday.

In a statement provided on Thursday, Lee called the amount spent on the book “grossly excessive.”

“An open and competitive bidding process for this project was clearly missed, and such poor accountability should never happen again,” he said.

Questions remain on just how and why McCorquodale — who at the time was making $220,000 a year writing grants for the county — received the job in the first place. In a previous interview, Smith said that a county supervisor suggested her for the gig but said he could not remember who. However, all supervisors who were on the board when the project was approved denied this in response to inquiries.

In the new report, Smith wrote that McCorquodale’s “long, well regarded experience” with the county from her grant-writing duties was the rationale for choosing her and not putting the project out to bid.

But an email obtained by this news organization through a public records request reveals that internal efforts were made at the time to find someone from a local college history or English department for the job. However, those plans were sidelined by top county officials, including Smith.

The email, from April 2018, also shows that the county executive’s office initially tried to obtain a no-bid contract for McCorquodale for the book project, but the department in charge of approving it indicated it would likely deny the request, leading county executive officials to find another way to give McCorquodale the gig.

The 2018 email was written by Fran Palacio, a former manager in the county executive’s office, and sent to Smith as well as Office of Strategic and Intergovernmental Affairs Director Steve Preminger.

“Procurement informed me that the single source has not been approved, and further that it will most likely not be approved,” wrote Palacio, who oversaw McCorquodale’s existing grant writing contracts, referring to the procurement department that oversees contracting at the county.

“Additionally, I was informed that staff is now doing their own market research with local colleges, history and English departments, to determine if they can do this type of written history project,” she wrote.

Since McCorquodale’s existing grant writing contract with the county allowed her to pursue other “professional writing,” Palacio continued, McCorquodale already had started on the history book project.

“I find this all to be a tad frustrating and now wonder if I should just pursue an amendment to her current agreement, reduce the grant work and increase the professional writing work,” wrote Palacio. Such a move would bypass the need for a bid process.

When asked about the 2018 email, both Smith and Preminger said they didn’t remember it. According to Smith, Palacio hasn’t worked for the county since 2020. The procurement department deferred questions to a county spokesperson, who deferred questions to Smith. Jean McCorquodale did not respond to a request for comment.

Nevertheless, the book project was added on as an amendment, McCorquodale’s contracts show. The manuscript she turned in is 580 pages and covers the Native American settlement of the region up to the post-World War II period.

An investigation by this news organization in early June found that McCorquodale had copied almost identical paragraphs from numerous online news sources while writing the manuscript. The copied paragraphs appear throughout the book — and comprise roughly a fifth of its contents.

April Halberstadt, a local historian who has authored 14 books and who consulted on McCorquodale’s project, said that it wasn’t “unreasonable” for McCorquodale to be chosen for the project, considering she’s worked for the county for decades. Halberstadt said she was of the understanding that the book was going to simply be a small update on the last two-and-a-half decades of Santa Clara County’s history and was “disappointed” to see how it turned out.

But others described the $1 million plus price tag as very unusual.

“I have never heard of anybody being paid that kind of money,” said Charlene Duval, a historical resources consultant with close to 50 years of experience in California history. “If a proposal had come out for $1 million, you would have had every historian in the country jumping on it.”