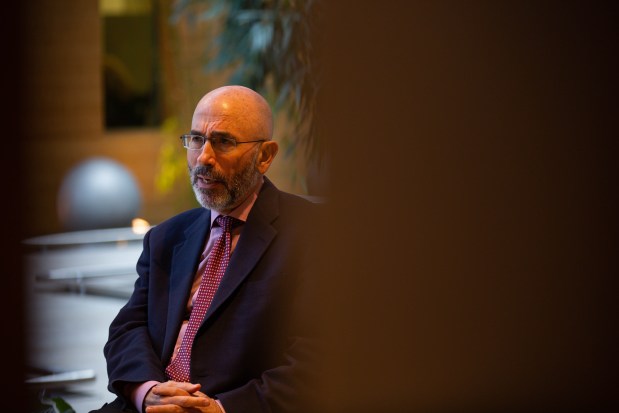 The wife of a longtime South Bay politician has been paid at least $2.45 million by Santa Clara County over a 10-year period to write grant applications and a history book that few residents likely will ever see, let alone read.

Jean McCorquodale, whose husband is former Santa Clara County supervisor and state Sen. Dan McCorquodale, was so highly sought by county officials that the Board of Supervisors awarded her multi-year contracts without bothering to get competing bids.

Since 2009, her grant-writing contracts swelled from $120,000 a year to roughly $1 million over her final two years in 2018 and 2019, when she was also tapped to write “a historical record that demonstrates the role of County government throughout the years.”

She delivered a 580-page draft manuscript in January, two years behind schedule.

County Executive Jeff Smith, whose office was responsible for managing the contracts, claims McCorquodale was uniquely qualified for the work and that her previous grant applications had brought in millions of dollars for the county. But Smith acknowledges the book “took too long” to write and he should have managed the project more closely but was focused on other things like the pandemic, labor strikes and wildfires.

And for all the effort, the book — which required McCorquodale to interview current and former county supervisors and executives — still has to be reworked. “I just think there are some parts that need to be more focused on county government,” Smith said, adding that the copyright on some photos also needs to be checked. The county will assume that work with help from McCorquodale, he said.

Smith couldn’t say where the idea for a county history book came from, and no one would say who suggested McCorquodale write it, raising questions about whether her husband’s political influence gave her one-person company, McCorquodale Corporation, special access to the county’s coffers.

Asked whether he saw a conflict in the board approving contracts with the wife of a former county supervisor, state Sen. Dave Cortese, who was on the board and voted in favor of the contracts, said, “Well, there wouldn’t be any financial conflict of interest. If you’re referring to Dan McCorquodale, he hasn’t been a public official for many decades now. Correct? She’s her own person. Whatever her career is, is her career. Whatever his career was, is his career.”

Even though Dan McCorquodale’s tenure as District 3 supervisor ended in 1982 and he left the state Senate in 1994, he remained well-known in political circles for years, although at 87 he is little seen today.

“You tend not to lose your influence and connections once you stop being an official politician,” said Sean McMorris, a program manager for government watchdog nonprofit California Common Cause. “It’s proper to speculate. Did she have any assistance from her husband and his contacts and his influence and his power? And did that play any role in the amount of money she was paid or potential preference she’s been given over the years?”

Dan McCorquodale did not respond to repeated requests for comment.

Smith said it hasn’t been determined where the book will end up besides county headquarters at 70 W. Hedding St. in San Jose and in the county archives.

Jean McCorquodale said Smith approached her about writing the history book. “It is my belief that I was invited to assume this project for several important reasons,” she said in an emailed response to this article. “One is (that) my advanced research and writing skills were well known to the County.”

But Smith said a county supervisor suggested she do the work, though he can’t remember who. “I don’t know who I was talking with about it, but I thought it would be a good idea to have a book,” he said.

All five supervisors on the board when the book project was tacked onto McCorquodale’s grant-writing contract — Cindy Chavez, Mike Wasserman, Dave Cortese, Joe Simitian and Ken Yeager — said they didn’t suggest McCorquodale for the job.

But McCorquodale, and her husband, were well known to some of them. Yeager, who is no longer on the board, has a longstanding relationship with the couple and received contributions from them for his supervisorial campaigns. He’s identified in the manuscript’s acknowledgments as an “important supporter” of the book project and a friend.

In October 2011, he commended Jean McCorquodale’s grant-writing work at a supervisors meeting, saying she is “someone who has brought in a great deal of revenue for the county, and she works very quietly and diligently at home doing all this work and has really been an unsung hero for the county for over 16 years.”

Though Yeager voted to approve McCorquodale’s grant-writing contracts, he was absent when the supervisors expanded her work in 2018 to incorporate the book writing assignment.

“I had no direct involvement in the project but I did think — separate from any funding issues — that a history of the county was a worthwhile project and I had confidence in Jean because of her extraordinary success at grant writing for the county,” he said in an email.

Smith’s office claimed McCorquodale pulled in $320 million in grant dollars since her work with the county began in 1995. According to staff reports to the board, her earlier work included writing grant applications for the county’s health and hospital system.

Despite repeated requests in the past couple of weeks to see a list of other contracts awarded to McCorquodale, county officials could only come up with a series of contracts dating back to 2007 worth a total of $448,640. They said they were searching for more.

Cortese, whose 2020 Senate campaign Dan McCorquodale endorsed, said Jean McCorquodale’s pay was commensurate with the value she brought to the county.

“It doesn’t seem like a bad deal,” Cortese said. “I think we’d have a real problem if the county paid a grant writer $2 million and it brought in nothing or brought in less than $2 million. I think that’d be a big concern. But grant writing is an important way to bring in outside dollars to government agencies and nonprofits as well.”

Jean McCorquodale first started to pick up work from the county in 1995 when it contracted her newly formed McCorquodale Corporation to help write grant applications. Her big break came in 2009 when the county executive’s office urged the supervisors to make her the county’s chief grant writer, taking on work previously done by other contracted grant writers working for multiple departments. That contract paid her $740,000 over five years.

When McCorquodale’s contract was up, Smith in 2014 asked the supervisors to extend her work five additional years, describing her as a “distinctly valuable resource” with a “unique knowledge base” of the county. The board approved a second contract that began at $165,000 a year and jumped to $220,000 in 2016 and 2017.

That’s a hefty sum for a government grant writer.  According to 2021 data from Transparent California, the highest-paid grant writer on the staff of a public agency in the state works for the Santa Ana Unified School District for $181,910, including benefits.

In 2018, Smith’s office amended the contract to include the history book, raising McCorquodale’s pay that year from $220,000 to $510,000. And in 2019, the supervisors approved another one-year extension for an additional $500,000 so she could finish writing the book along with other grant writing work.

McCorquodale, who declined an interview but responded by email to questions, said the extension was “necessary because the book project proved to be substantially more difficult than anyone anticipated.”

Important documents for her research were missing from the county’s historical record, including 70 years of board minutes and agendas that may have been lost in a 1931 courthouse fire. Then, the pandemic barred her for months from accessing libraries, records collections and museums to fill in the blanks, she said.

“This seriously slowed research,” she wrote.

McCorquodale also said she spent “a very substantial amount” of her own money on the book, including for its cover design, a proofreader, two research assistants and a library science graduate student.

And she said she worked on the book “without any additional compensation whatsoever” for two years after her contract with the county ended in 2020 to complete the work.

McCorquodale is no longer writing grants for the county, which Smith said is now sufficiently staffed to absorb that work.

He too was mentioned in the acknowledgments of McCorquodale’s book, as someone who “recognized the value of a comprehensive historical record of Santa Clara County.”

She adds in the next paragraph, “For many years there has been and continues to be an inexplicable lack of public knowledge about county government, which is surprising and unfortunate considering its wide-ranging responsibilities and the tremendous influence it exerts over the lives of virtually all who live or work in the county. Dr. Smith combined his concern about the absence of knowledge of the county’s history with his goal of creating a better understanding of the role played by Santa Clara County government.”