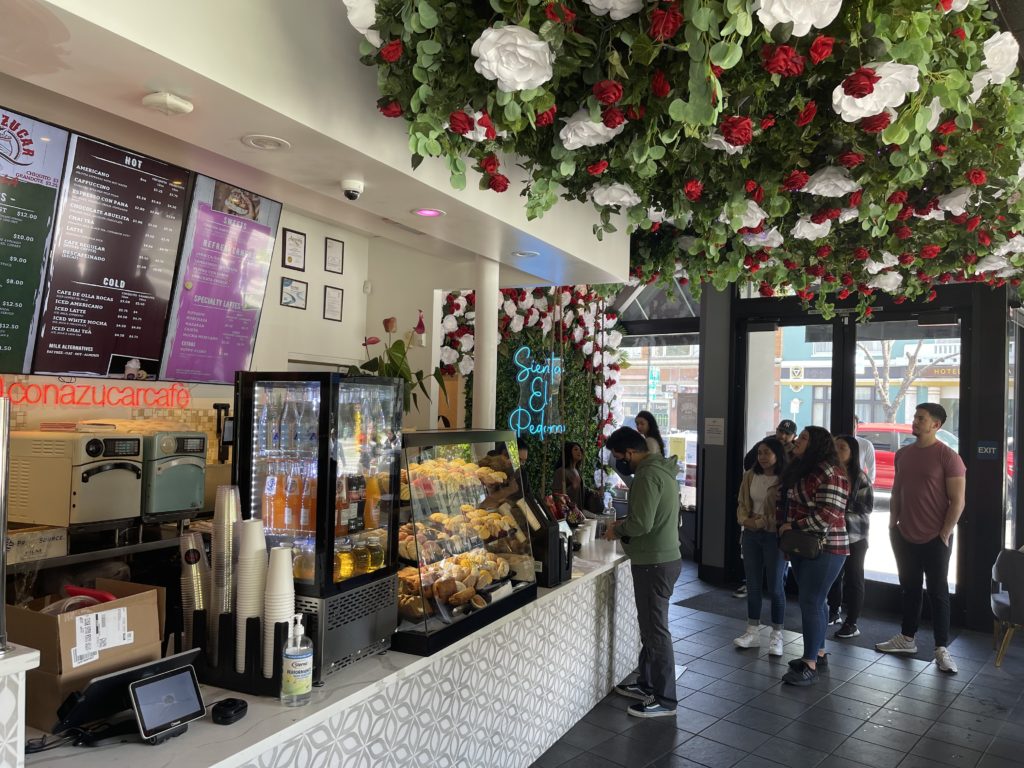 The first thing you see entering Con Azucar Café is a swing hanging from the ceiling and a neon sign reading “Siente el Pedorro” framed by artificial flowers and foliage. Don’t pay attention to Google’s translation of the phrase, warns co-owner Alejandra Gonzalez—the literal translation is different than what the slang term means: “sit your butt down.”

“In Mexico, whether you are in a poor or a rich household, there is always a swing somewhere,” she told thecupertinodigest.com. “We wanted to have it so that people could sit on the swing and get their picture taken; something they could take with them that represents our culture.”

The Biz Beat: Kyoto Palace in Campbell still reigns after more than 40 years

The spirit of the cafe at 101 E. Santa Clara St. in downtown San Jose—from the paper flowers hanging over a display case filled with fresh pan dulce to the huge portrait mural of Frida Kahlo—delights in the festiveness of Mexican culture as customers line up to order ham and cheese tortas, ice-cold refreshers and the house specialty, cafe de olla.

“Our cafe de olla is a nice brewed aromatic coffee with cinnamon and brown sugar,” said Gonzalez, who founded the cafe along with Alexander and Victor Garcia, owners of nearby restaurant Tostadas, and her husband Uriel Soto. “Con Azucar began with a mutual love of coffee and our roots and our just wanting to bring something new and fun to San Jose. It is something you will find in every restaurant and coffee shop in Mexico, but it is hard to find anywhere else.”

There are Mexico-tinged specialty lattes as well, flavored with mazapan (ground peanuts and sugar), horchata (sweet white rice) and cajeta (caramel), along with a selection of cappuccinos, espresso and chai.

On request, the cafe can produce “selfie-ccinos,” whereby any image on a phone can be sent to a laser imaging device that burns photographs or artwork onto the coffee’s foam.

For something a bit colder and more colorful, the iced pepino con limon (cucumber and lime) and tamarindo lemonade, both served rimmed in Chamoy and topped with a little spoonful of tamarind and a sprinkling of hard candy, are marvelous kaleidoscopes of sweet and sour flavors.

As a nod to vendors who pedal through Mexican neighborhoods selling their wares, in-house the cafe serves small pan dulce in baskets balanced on little bicycles.

“We wanted some of our pan dulce to be something bite-sized that you could enjoy with your drink,” Gonzalez said, “rather than having to indulge in the huge breads that you see in the bakeries.”

Still, standard-sized Mexican sweet breads are available, and one specialty is a dessert sandwich made with a large fresh concha sliced in half, stuffed with two flavors of ice cream, topped with cajeta and chocolate syrup and finished off with sprinkles.

Con Azucar’s owners relied exclusively on intensive social media marketing to generate buzz for the Feb. 26 grand opening. Gonzalez, who blogs on Instagram under the name missfoodiebayarea, promoted the venture to her 42,000 followers and the team also used Tostada’s 36,000 followers to cross-promote the new business.

With a location close to San Jose City Hall and constant foot traffic, the cafe is busy throughout the day and has already built up a regular clientele, like returning customer Alan Enriquez.

“The traditional cafe de olla tastes amazing, hot in the morning,” he told thecupertinodigest.com. “And there’s no panaderia nearby so being able to get fresh pan dulce is a really good thing. It’s great to have a cafe with this kind of aesthetic dedicated to Mexican drinks and foods because there is nothing else around here like this place.”

What puts them on the map: Cafe de olla and a variety of specialty drinks and sweets