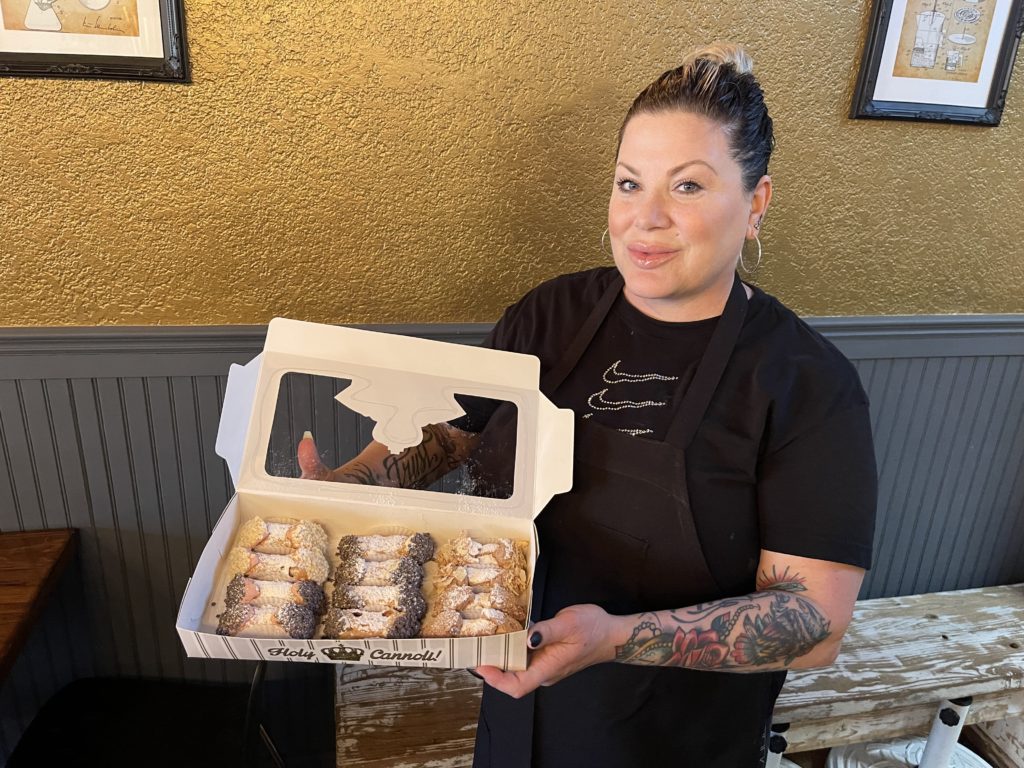 The name “Holy Cannoli” is more than apt for a cafe and bakery in downtown San Jose: the eatery’s cream is as light as a cloud in Heaven. The thin, crisp shell gives the dessert some crunch, but the ethereal cream is a miracle of sweetness with a smooth rich texture.

With two sizes, nine flavors and 18 toppings, you could have a different cannoli variation almost every day of the year. And when you have run out of cannoli variations to try, there are still fresh-baked pastries and an array of breakfast and lunch options on the menu.

“My grandmothers were both home bakers and my dad was a chef,” said owner Jamie Whitmire, who founded Holy Cannoli in 2013. “I grew up cooking with them and I went to culinary school, in part, because I already knew I was a good cook and I knew how to pair flavors together. But I wanted to learn the fundamentals of cooking and baking and knife skills.”

After graduating from culinary school, she began catering and running a food truck, still her primary business. She opened her storefront in 2021.

“I opened at the height of the pandemic,” Whitmire said. “That turned out, surprisingly, to be a good time. At any other time, a cafe and bakery would not have gotten a lot of publicity simply for opening—and people were very supportive.”

With a customer base built through her catering business, and a location just a block from San Jose City Hall at 138 E. Santa Clara St., Whitmire has a ready forum for her diverse skills.

“I call myself a chef and a baker,” she said. “It is a skill set that not everyone has, but I love doing both. I have a sweet/savory flavor profile so the two go hand in hand for me.”

Her cannoli recipe comes from the Italian side of her family, with her own modern twists. The cream starts with a base of mascarpone, mixed with ricotta cheese, cinnamon and powdered sugar.

“The freshness of the cream itself makes you want to come back for more,” said Toni Saldivar, local baker and owner of The Sugar Table. “And the different toppings like pistachios and coconut give you a lot of choices.”

Those choices begin with the selection of creams, all based on the traditional plain cream, including fruit-flavored, chocolate, Nutella and pistachio. The cream is piped into shells that are handmade daily and then the ends of the cannoli are dipped in a wide variety of toppings including toasted nuts, milk or white chocolate chips, fresh raspberry or strawberry, candied orange or lemon, toffee and even espresso beans.

“I keep getting people telling me that what I make are not real cannoli,” Whitmire said.  “But I wanted to be creative and make them a specialty item that nobody else was doing in the area. So I stepped out of the box to create all these different flavors. I also have the flexibility to create flavors people might want to special order.”

A dozen cannolis from Holy Cannoli. Photo by Robert Eliason.

While cannoli are the obvious focus of the shop, Holy Cannoli is a full-menu cafe as well. Whitmire offers a breakfast menu along with assorted pastries and a lunch menu that includes homemade ravioli, sandwiches made with fresh-baked focaccia, calzones and salads.

Still, the cannoli is the big draw, particularly to regular customers like San Jose resident Colm Cunning who has been coming since opening day.

“My wife and I saw they were opening and we are both addicted to cannoli, so we stopped by,” he told thecupertinodigest.com. “Everyone here is friendly and the cannoli are awesome. I just had a panini for the first time and it was really good too.”

Cunning’s favorites are the traditional cannoli and the chocolate with toffee topping.

“I can go through six of the minis or two of the regulars,” he said. “I would tell people they have to check this place out if they are in any way, shape or form interested in cannoli.”

For Whitmire, while she finds new ways of serving cannoli, she is also respectful of the traditions she learned from her grandmother.

“There is a certain nostalgia to having a cannoli when you are from Boston or New York or Italy,” she said. “I have people traveling from all over the Bay Area and they tell me about how their families used to make cannoli or the bakeries they used to go to when they were younger. When they come in and see us piping, it brings them back to another time and it is a great connection we make with our customers.”

What puts them on the map: All the flavor and topping variations