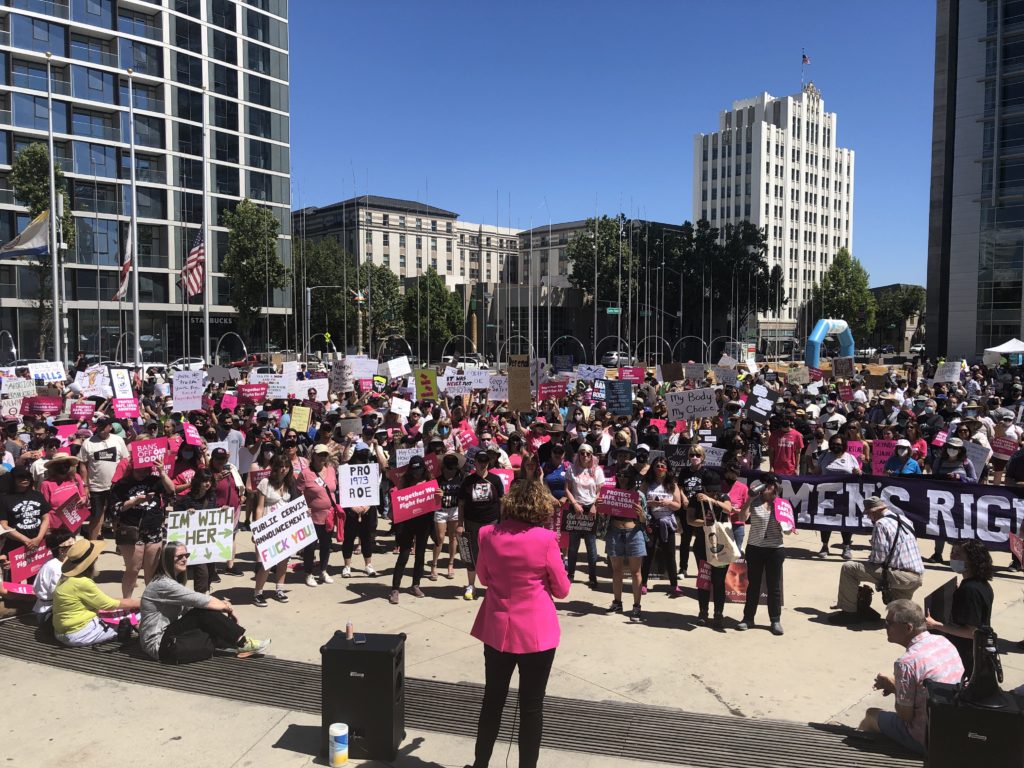 Rallies for reproductive rights took place nationwide Saturday, including in front of San Jose City Hall. For some residents, it was their first time protesting. For others, it’s a reminder of a much older battle.

“We’re going back in time,” attendee Caitlyn Garsh told thecupertinodigest.com. She attended the protest with her great aunt, whose older sister took part in reproductive rights protests in the early 1970s. “It’s insane people are trying to decide what we can do with our bodies.”

Planned Parenthood Mar Monte and a coalition of advocates and residents joined together in downtown San Jose and held signs proclaiming, “My body, my choice,” “Protect safe, legal abortion” and “Together we fight for all.” The demonstration took place in anticipation of the Supreme Court overturning the 1973 landmark Roe. v. Wade decision, which has guaranteed the right to abortions for close to 50 years. On May 2, Politico broke the story on a leaked draft opinion indicating the nation’s highest court will overturn Roe v. Wade, which could allow states to outlaw nearly all abortions at 15 weeks gestation.

“It’s unbelievable to me in 2022, they are going this far with reproductive health care,” Planned Parenthood Mar Monte CEO Stacy Cross told thecupertinodigest.com. “It could impact many other rights we have gotten from the Supreme Court during my lifetime.”

“Today is about turning fear and pain into ferocity and power,” Chavez said.

Resident Crystal Calhoun said in March 1973, at age 16, she was one of the first teenagers in America to have a legal abortion.

“It kept my life on track,” she told thecupertinodigest.com. “I was able to graduate, have a career, marry and have three children. If that hadn’t happened, I would’ve been a teenage mother dependent on the state.”

Calhoun considers herself lucky. She said before abortions were legal in the U.S., some women used bleach or coat hangers to end a pregnancy, which could result in being unable to have children—and even death. According to the Guttmacher Institute, a research and policy organization, a 1960s survey found that in New York City, eight out of 10 low-income women who had an abortion attempted a self-induced procedure. In 1965, 17% of pregnancy and childbirth related deaths resulted from illegal abortions.

Helen Barrios, 71, knew women who had illegal abortions before Roe v. Wade passed. She can’t believe she still has to protest for reproductive rights. Photo by Lorraine Gabbert.

Helen Barrios, 71, said she knew people who had to have illegal abortions before Roe v. Wade passed. She said it’s demoralizing and frustrating to still be fighting for reproductive rights decades later.

“The vast majority of Americans support a woman’s right to choose,” she said, “and the Supreme Court should reflect the majority sentiment in the country.”

While these women have been speaking up for reproductive rights for years, for others it was their first time taking action, including 12-year-old Imelia Nguyen. She showed up at City Hall with her mother, Kristi Thraves, to share their voices.

“People could die from this,” Nguyen told thecupertinodigest.com. “Everyone should be heard… no matter what color they are. We want our rights in the future.”