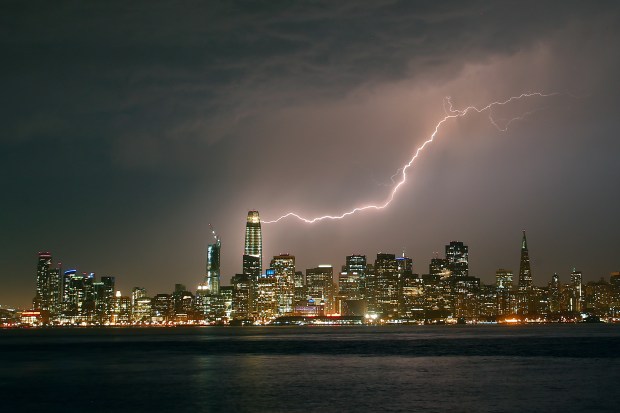 11 most iconic Bay Area buildings for the 21st century

The “Star Trek” universe of movies and TV shows set its 23rd century Starfleet Academy in San Francisco, letting fans feast on images of a futuristic skyline that still included such 20th century icons as the Transamerica Pyramid, Coit Tower and the Golden Gate Bridge.

It turns out that this sci-fi vision of Bay Area design has already arrived. In the past 20 years, more than 15 skyscrapers, including Salesforce’s 61-story tower, have reshaped the city’s once picturesquely low-slung skyline. In Silicon Valley, Apple opened a new $5 billion headquarters that locals promptly dubbed the “spaceship,” and sleek, ultramodern and environmentally sustainable designs have become de rigueur for any new government, corporate or cultural building that aspires to world-class status.

While the Bay Area is home to many famous examples of 19th and 20th century architecture, here’s a list of future design icons, all built since the start of the 21st century. This list was compiled with recommendations from the San Francisco, East Bay and Silicon Valley chapters of the American Institute of Architects.

Apple Park, Cupertino: One of Steve Jobs’ last major projects before his 2011 death was to win permission to build what he called “the best office building in the world.” The centerpiece of his corporate headquarters, designed by architect Norman Foster and opened in 2017, became a 2.8 million-square-foot ring of glass-encased office space in the middle of 175 acres of parkland. No expense was spared to meet Jobs’ exacting standards. The building was equipped with the world’s largest curved-glass panes and largest rooftop solar farm and surrounded by 9,000 drought-resistant trees.

But in a turn of global events that even Jobs couldn’t predict, the building has been mostly vacant in recent years, due to the pandemic. Apple and other Bay Area companies are still navigating their way through the debate over whether workers need to be in an office to do their jobs.

Salesforce Tower, San Francisco: When it opened in 2018, this 1,070-foot tall colossus replaced the Transamerica Pyramid as the Bay Area’s tallest building. Like the pyramid, the 61-story Salesforce Tower also became a lightning rod for criticism, mostly

from people who decried the Manhattanization of San Francisco’s skyline. It remains to be seen whether the tower follows the pyramid in becoming a visual symbol of the city. (At one point, the pyramid even became a sight gag atop one of the showstopper hats of “Beach Blanket Babylon.”) Some might say the Salesforce Tower already is an icon, if only because its size makes it hard to miss.

Museum makeovers: Starting in the early 2000s, four of the Bay Area’s leading cultural institutions got major makeovers. When the new M.H. de Young Museum opened in 2005 in Golden Gate Park, replacing an 1890s building badly damaged in the 1989 Loma Prieta earthquake, critics griped that the copper-covered structure looked too much like a rusty aircraft carrier. But as the

architectural firm Herzog and de Meuron foresaw, the natural elements of wind and fog would soon darken the copper to a sheen that blends in with the landscape. Meanwhile, the museum has become one of the top 10 visited art museums in the United States, known for hosting wildly popular touring exhibitions as well as for its vast collection of artworks from the 17th to 21st centuries.

Across the park’s music concourse, the California Academy of Sciences reopened in 2008 with a glass-walled, steel-framed building by architect Renzo Piano that houses a planetarium, aquarium and rainforest, alive with plant and animal species. The

museum’s commitment to showcasing the interdependence of biological and Earth systems may be best demonstrated by its 2.5-acre green roof, featuring an undulating expanse of native grasses and wildflowers.

With a game-changing expansion that opened with much fanfare in 2016, the San Francisco Museum of Modern Art tripled the amount of exhibition space in its existing Mario Botta-designed building. In a statement from Snøhetta, the firm behind the

SAN FRANCISCO, CALIFORNIA – JUNE 15: The Museum of Modern Art, which tripled in space in 2016 after an expansion to the existing Mario Botta-designed building, is photographed in San Francisco, Calif., on Wednesday, June 15, 2022. (Karl Mondon/Bay Area News Group)

expansion, the museum also became more accessible than ever to the public, “enlivening the surrounding cityscape” by opening up ways that people can circulate into the museum and throughout the South of Market neighborhood.

When seismic safety issues forced the Berkeley Museum and Pacific Film Archive to abandon its longtime Brutalist home designed by Mario Ciampi, the museum settled on another plot of UC Berkeley-owned land. With its new downtown Berkeley

location, BAMPFA wanted its new home to thematically unite the old and new. The firm Diller Scofidio + Renfro achieved that by constructing some 35,000 square feet of new space around the Art Deco-style core of the university’s former printing plant. The new space comes in a striking curvilinear form, covered in stainless steel, that drapes over the entrance and houses the film theater and other new spaces.

“genius grant” recipient, reinterpreted the idea of the classic bay window by stacking one floor atop another at gradual angles. The strategy was to open up each residence to city or bay views, while creating the image of windows swirling up in a 400-foot-tall corkscrew. In addition to its design, the building also has won praise for reserving up to 40 percent of its luxury units for buyers qualifying for affordable housing.

San Jose City Hall: When building a new government center, San Jose turned to Pritzker Prize-winning Richard Meier, one of the world’s foremost architects, creator of civic spaces from the Getty Center in Los Angeles to Barcelona’s Museum of

Contemporary Art. In an otherwise postmodern building, with a gleaming 18-story office tower, San Jose’s city hall pays tribute to the classical design of other seats of government power. Its centerpiece is a $30 million rotunda covered by a dome that is slightly bigger than the U.S. Capitol’s and made up of 1,032 glass panes.

Transbay Transit Center, San Francisco: If all the years of planning finally come together some time in the next decade, this center won’t just be a “bus terminal,” in the words of Fred Clarke of Pelli Clarke Pelli Architects. With its distinctive, undulating

A drone view of the new Transbay Transit Center and public park are seen in downtown San Francisco, Calif., on Wednesday, Aug. 8, 2018. The grand opening of the $2.3 billion terminal is on Saturday. (Jane Tyska/Bay Area News Group)

walls, stretching about five city blocks, the complex, which opened in 2018 and which will one day link bus and train systems throughout the city, region and state, should also become the heart of a bustling new multi-use urban neighborhood. Street-level shops and cafes should draw people in, but the real reason for lingering is the 5.4-acre rooftop park, featuring green lawns, a wetlands marsh, a cluster of oak trees and places for children to play high above the bustling streetscape.

Samsung America Headquarters, San Jose: From its exterior, this building presents three stacked slabs covered in glass and metal panels that make it look a bit like a giant microchip. That’s probably appropriate, given that it houses the U.S. semiconductor division for the South Korean electronics and mobile-phone giant. But past the entrance, the 1 million-square-foot

New USA headquarters in north San Jose at North First Street and TasmanDrive for *Samsung Electronics Device Solutions America*. which is thecomponents business of Samsung Electronics. The renderings show the insideand outside of the office complex, which now is occupied by 700 Samsungemployees and has the capacity to have 2,000 workers.Photo credit: Samsung Electronics

building north of downtown quickly opens up to a campus that was designed by architects at Seattle-based NBBJ to feel light, airy and in tune with how people actually move through space, according to the Atlantic. Parklike surroundings, terraces and a doughnut-shaped central courtyard with floor-to-ceiling windows enhance an environment that NBBJ intended to be welcoming to the sorts of spontaneous collaboration and innovation for which Silicon Valley is known.

C.V. Starr East Asian Library, UC Berkeley: The exterior of the library, designed by husband-and-wife architects Tod Williams and Billie Tsien, may not seem particularly special. The south wall of the rectangular building facing Memorial Glade is clad with granite slabs and a monumental bronze screen that allow it to blend in with other classic buildings in the heart of the campus. But upon entering, visitors encounter something beyond the university’s vast collection of rare and priceless East Asian books and artifacts: a space that feels open and bathed in filtered natural light. It’s no wonder that the university reports that since its 2008 opening, the library has become a favorite spot for students to study, regardless of their major.