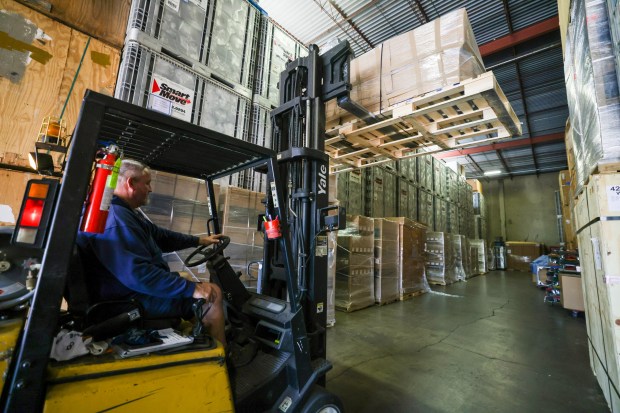 Moving out: California cities are bleeding residents. How long will the trend last?

During the COVID-19 pandemic, it seemed like everyone knew a co-worker fleeing the Bay Area.

Now, a new report out of the Federal Reserve Bank of Chicago shows just how much the exodus is gaining steam.

Only Illinois ranked worse off than the Golden State when it came to moving vans heading for the border during the pandemic, according to the report, which focused on data from the moving company United Van Lines. In 2018-19, 56% of moves in California were families fleeing the state. In 2020-21, that figure jumped to nearly 60%.

The state that was by far the biggest draw of California residents? It was Texas, the destination for more than 7,500 California families during the four years in the study, perhaps little surprise given that Silicon Valley’s tech giants like Oracle, Tesla and Hewlett Packard Enterprise picked up and moved their headquarters there too.

California also continues to lose residents to Washington, Florida and Virginia while attracting consistently fewer movers arriving from those states.

“Our cities have always competed with the suburbs to attract residents, but now they’re competing against every single other area in America,” said Matthew Kahn, an urban economics professor at USC and author of a recent book on the remote economy. “It’s San Francisco against Boise, Idaho, or Bozeman, Montana. We’ve never seen this before.”

California’s largest cities have been steadily hemorrhaging residents since the start of the pandemic. For the first time since 2013, San Jose’s population dropped below 1 million, and San Francisco’s population has dropped by more than 3% in the past two years. Even Los Angeles saw its population steadily decline during the pandemic. A continuing exodus from these cities, experts say, could eventually translate to a major shake-up across housing markets, demographics and corporate landscapes.

Attracting residents from other states is about more than just bragging rights in the increasingly bitter rivalry between California Gov. Gavin Newsom and red-state governors in Florida and Texas. It’s about increasing tax revenue, obtaining larger pots of federal funding and wrestling away congressional seats. While California lost a congressional seat as a result of the 2020 Census, the Lone Star State gained two and the Sunshine State added another.

California’s struggle to keep its residents from hitting the road is nothing new. But the acceleration is the product of a slew of pandemic-related shifts to the employment market that has seen an increasingly flexible workforce disperse across the nation, said Daryl Fairweather, the chief economist at real estate brokerage Redfin.

Tech hubs like Silicon Valley are the center of the crisis, she said, as remote work opportunities paired with rising housing costs are driving young workers away. In Santa Clara County, soaring rents have not been checked by the pandemic, rising another 6.3% in 2021, according to a report from the California Housing Partnership.

“For the longest time, Silicon Valley was the place where tech workers could earn the highest salary,” Fairweather said, pointing out that the unique employment opportunities helped counterbalance sky-high housing costs. But once employees begin to leave, she said, the effects can spiral. “When your co-workers start working remotely, the benefits from a networking and interaction perspective go down, and that’s what we’re starting to see.”

While high-profile corporate exits from companies like Oracle and Tesla have made headlines, the most enduring market impacts will come from larger-scale changes to how and where people work. When Twitter announced in March that its 5,000-plus San Francisco-based employees would have the option to work full-time from home “forever,” it confirmed what many experts had already suspected — remote work is here to stay.

Tech workforces in regions like Silicon Valley are the most exposed to the shift. According to a Stanford report authored by economics professor Nick Bloom and Arjun Ramani, these workers are driving a “donut effect” migration that has hollowed out many major cities, including San Francisco and San Jose. The edges of the donuts – suburbs around cities and smaller nearby metro areas – are now being filled by hybrid and fully-remote workers, who combine to make up half of all employees.

“If you’re a tech firm and you’re hiring, it’s really hard to convince people to work for you. The tech labor market is really tight,” Ramani said. “Being remote full-time can be a competitive advantage for a lot of firms that really need it right now.”

An accelerating exodus also could force the hands of California’s public officials who will need to find new ways to attract residents, according to Kahn.

“In the past, the job opportunities anchored these cities,” Khan said, pointing to physical corporate infrastructure and employee commutes. “But when workers become untethered from company headquarters like this, the cities have to raise their game.”

To remain atop the food chain, Kahn said these cities will have to address broad-sweeping challenges to quality of life, from public safety to pollution to homelessness.

If large-scale exits from the Bay Area continue to gain pace, it could serve as a reset for a region that some say is going through an identity crisis. Once a center of youth, the Bay Area is now grappling with an aging workforce — the median age in Santa Clara County, 37, and San Mateo County, 40, are both significantly higher than Austin, Texas, where the median age is 34. And despite the demographic shifts, housing and rent prices are once again nearing all-time highs in the Bay Area, alienating service workers and adding fuel to the exodus of middle and high-income workers.

But the road to establishing lasting affordability in the Bay Area, even amid a transformation like this, is long and winding, according to Matt Schwartz, the president and CEO of the California Housing Partnership, an advocacy group dedicated to expanding affordable housing options across the state. Because the population leaving California is primarily composed of higher-income tech workers, he said, the only people who will be able to fill their vacancies will be other middle or high-income residents.

“It’s easy to assume that simply because we have fewer people competing in the rental market as a whole, prices will drop enough at the bottom end,” Schwartz said. “But for people on fixed incomes, that’s not the way things work.”