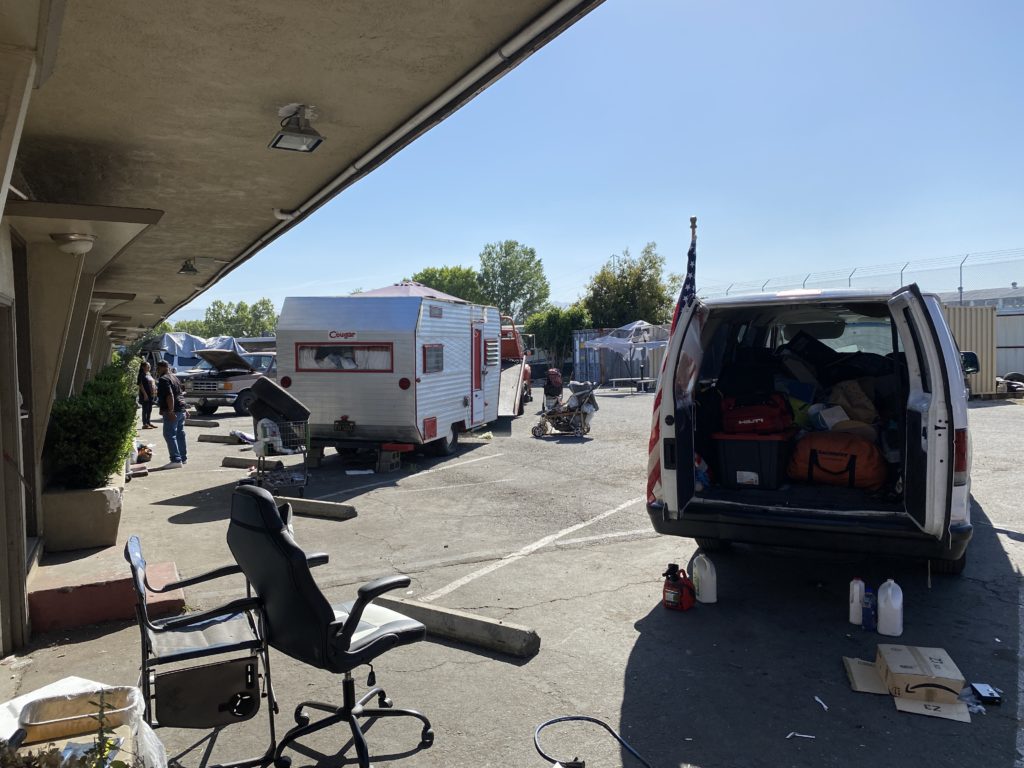 About two dozen people will likely end up back on the streets of San Jose, after one of the largest tech companies in the world failed to keep its promises.

A nine-month motel program paid for by Apple and managed by nonprofit Homefirst ended on Monday, causing panic for a group of homeless people. While some individuals have moved on to better living situations, other are still unhoused.

People scrambled to haul their belongings out of Casa Linda Motel in San Jose Monday at the end of a supportive housing program run by HomeFirst and paid for by Apple. Photo by Tran Nguyen.

“I knew they wouldn’t find us housing,” Lynn Shipman, an unhoused resident who was part of the Apple program, told thecupertinodigest.com. “That’s why I didn’t sell my camper.”

Shipman, who was at the motel Monday to tow her camper to a new encampment location, is among several dozen people who used to live at a sprawling camp near Component Drive in North San Jose. Apple, which owns the land, forced the homeless people to disband the site last September, citing sanitation and privacy reasons. The tech company then paid HomeFirst, a Milpitas-based nonprofit, millions of dollars to provide nine months of motel rooms and get people into more stable housing.

Too little too late

HomeFirst has helped roughly 10 people into permanent and temporary housing, the organization says—but as many as 25 participants, who were asked to leave the motel by Monday afternoon, have nowhere to go.

Individuals staying at the Casa Linda Motel at 1669 Monterey Road said HomeFirst was supposed to also help them fix their vehicles and pay for registration fees—promises that have yet to be fulfilled as people scrambled to leave Monday morning. Some have found jobs during the program, but they worry the cycle of homelessness will upend their lives again.

HomeFirst officials said they connected more than 25% of participants to health care and social security services. Nearly all are now on a waiting list for housing vouchers, but it could take years before participants get into housing through the program. The nonprofit is working to get participants into tiny home communities and homeless shelters.

“We know the program worked quite efficiently for some program participants, and more time is needed for others,” a HomeFirst spokesperson told thecupertinodigest.com.

An Apple spokesperson didn’t address the motel program, but told thecupertinodigest.com the company is working with local agencies to address the homeless crisis.

“As part of our $2.5 billion plan to help address the housing crisis in California, we’ve been working with partners across the state to support at-risk communities and provide new affordable units,” the spokesperson said. “We’ll continue looking for ways to support communities and affordable housing.”

The situation facing participants in the program—some of whom have serious medical conditions or live with young children—reflects the low success rate in pulling people out of homelessness in Silicon Valley. Despite unprecedented funding and efforts to address the issue, the homeless population in one of the wealthiest parts of the country continues to grow. In San Jose, the number of unhoused people jumped 11% during the pandemic, from 6,097 to 6,739.

“All I got out of this was a kick in my (butt),” participant Mario Valdez told thecupertinodigest.com. “I guess HomeFirst is trying now, but it’s honestly too late. They should have had a plan nine months ago.”

Santa Clara County and San Jose officials have raced to build more residences, but progress remains slow.  Since 2016, the county has doled out $588 million from a housing bond to support 41 housing projects—or roughly 4,440 residences—across the region. Approximately 800 residences, or just 18%, have been completed as of May.

Gail Osmer, a homeless advocate who has worked with participants at the motel since last September, said HomeFirst dropped the ball.

“This is so disappointing,” Osmer told thecupertinodigest.com. “This is not right how people are being treated.”

Nathan Tavani, 71, was among a few participants who accepted a tiny home as the last resort last week. Tavani needs help paying for a $3,300 registration fee for a van he bought from a junkyard. As of Monday, his van still has expired tags.

“At least the tiny home is something,” Tavani told thecupertinodigest.com, adding his age is getting to him.

Others in the program have turned down the tiny home offers, citing strict rules such as no television, no socializing with others at the site and no spaces for their vehicles.

“I’m going to end up in my car again,” Richard Bebee, who was diagnosed with sleep apnea last month, told thecupertinodigest.com. “There’s no place to go.”

According to a doctor’s note reviewed by thecupertinodigest.com, Bebee wouldn’t be able to continue his treatment if he sleeps in a car. As others hauled their belongings into cars and RVs Monday, Bebee was on the phone with the county’s homeless hotline trying to get into another motel program.

“They told me there’s nothing right now,” Bebee said.