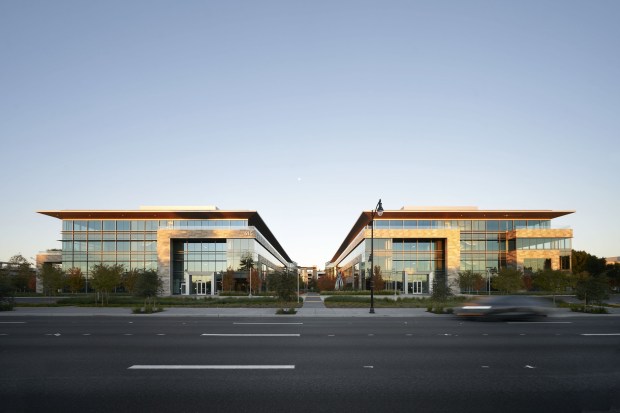 SUNNYVALE — Apple has leased a big office campus in Sunnyvale in a deal that widens the tech titan’s reach in Silicon Valley and suggests that companies are returning to the workplace to a significant extent.

The iPhone maker has leased the entirety of a two-building modern tech complex in Sunnyvale that’s known as Mathilda Commons, according to sources with knowledge of the just-completed leasing deal.

With the rental agreement, Apple continues to expand in a big way in Sunnyvale, primarily through leases, although the tech titan has also bought some properties in the Silicon Valley job hub.

Jay Paul and Newmark executives declined to discuss the transaction other than to say that both buildings are fully leased and that the offices are no longer available to be rented.

The fitness center totals 15,500 square feet, according to marketing materials and the project’s website. The rooftop terrace totals 9,700 square feet.

Apple’s primary job hubs are in Cupertino, where the company’s headquarters are located in the tech company’s iconic circular “spaceship” campus.

Over the last 10 years, however, Apple has ventured beyond Cupertino and expanded into Sunnyvale, Santa Clara and San Jose. In north San Jose, Apple has bought land for a huge campus whose lands are primarily west of North First Street.

In 2021, Apple signed one of the biggest rental deals of the year when the company leased 698,000 square feet at Sunnyvale’s Pathline Park office campus.

With the most recent deal in Sunnyvale at Mathilda Commons, Apple could potentially employ 1,900 workers in the two buildings.