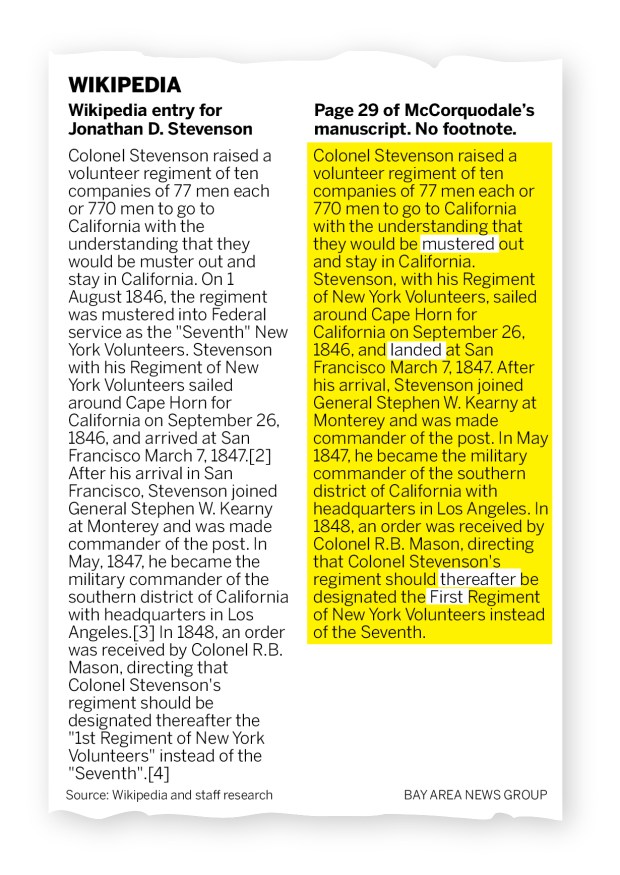 Investigation ordered after text from Wikipedia, other sources is found in draft of costly Santa Clara County history book

Santa Clara County is launching an investigation into a high-priced government history book it commissioned from the wife of a former South Bay politician after roughly one-fifth of the manuscript was found by this news organization to contain content copied from numerous online sources.

Jean McCorquodale, wife of former county supervisor and state Sen. Dan McCorquodale, was awarded contracts without competitive bids over a 10-year period that paid her at least $2.45 million to write grant applications and to research and write a county government history book. The book project, overseen by the county executive’s office, fell two years behind schedule.

In the 580-page draft manuscript she submitted in January, entire paragraphs appear to have been copied almost verbatim from Wikipedia, the History Channel, the Mercury News, the Washington Post, county web pages and other sources, about half of them without footnotes.

County Executive Jeff Smith said Thursday he was “shocked” and “very concerned” after this news organization sent him side-by-side comparisons of paragraphs in the manuscript and the original content from other sources.

Smith said he is putting the project “on hold” and plans to hire a third-party investigator to review the manuscript. He said he’s also consulting with the county counsel, but did not elaborate.

“It’s troublesome,” Smith said, adding that he expected an original work. If the book is eventually published, it may not be seen by many people because it could end up only in the county government building at 70 W. Hedding Street in San Jose and in the county archives.

In an email response to this news organization, McCorquodale said the manuscript was just a draft and she didn’t intend for any of the sections in question to remain in the final work.

But Smith said he hasn’t received any revisions to the manuscript McCorquodale submitted and his office shared with this news organization. “The copy that you have is the only copy I have,” he said. That copy does not highlight placeholder paragraphs.

McCorquodale did not respond to a follow-up request asking her to share the version of the manuscript she referred to in which the sections in question had been removed or rewritten.

This news organization discovered the copied material by running McCorquodale’s manuscript through a plagiarism software called Scribbr, then double-checked the original source the software identified against her work.

The copied work appears consistently throughout the manuscript, and in almost every instance McCorquodale’s version changed just a few words. About half of the copied paragraphs had footnotes, but the University of California, Berkeley’s guide on avoiding plagiarism says even footnoted paragraphs should be paraphrased and not copied almost directly.

The revelations come in the wake of an investigation by this news organization published May 29 that revealed McCorquodale has been paid at least $2.45 million by Santa Clara County since 2009 for exclusive grant-writing work and the county history book project.

During that period, she was awarded no-bid contracts by supervisors after the county executive’s office claimed she possessed “unique” credentials that made her a “distinctly valuable resource” when it came to her grant writing. The office also justified those contracts by saying her previous grant applications had brought in millions of dollars.

After years of grant writing, she was tapped in 2018 to write “a historical record that demonstrates the role of County government throughout the years.” Smith previously acknowledged the book “took too long” to write and he should have managed the project more closely.

In chapter five of McCorquodale’s manuscript, which covers early European settlement in the county, four out of 175 words from a section of the Wikipedia page of politician and military leader Jonathan D. Stevenson were changed. Chapter 20 contains an entire paragraph word-for-word from a History Channel article about the Spanish-American War’s Treaty of Paris. In chapter 35, 17 out of 115 words from two paragraphs in a 2010 Mercury News article about World War II’s influence on Silicon Valley were changed.

McCorquodale appeared to even have picked up materials from the county, including one paragraph from a Santa Clara County Parks and Recreation website about the Almaden Quicksilver Mining Museum in San Jose, with four words changed.

Other sources McCorquodale appeared to have copied material from include the Encyclopedia Britannica, S.F. Geneaology, the California State Association of Counties, the California Supreme Court Historical Society, SFGATE, the Atlantic Magazine, the National Park Service, San José State University’s Sourisseau Academy for State and Local History, the California Department of Parks and Recreation, the Constitutional Rights Foundation and The Los Angeles Times, according to a review of the manuscript.

McCorquodale has worked with the county since 1995, when her one-person McCorquodale Corporation was first given contracts to complete grant applications.

In 2009, the supervisors approved a no-bid contract to make her the county’s sole grant writer. The contract lasted five years and was ultimately worth $740,000.

The following year, the supervisors approved an additional half million dollars for McCorquodale because the county executive’s office said the history book was taking longer than expected.

In previous statements, McCorquodale said the project had to be extended because it was “more difficult than anyone anticipated,” and the pandemic delayed her from accessing important historical documents. McCorquodale also claims to have spent her own money on the book’s cover design, the hiring of research assistants and other resources.