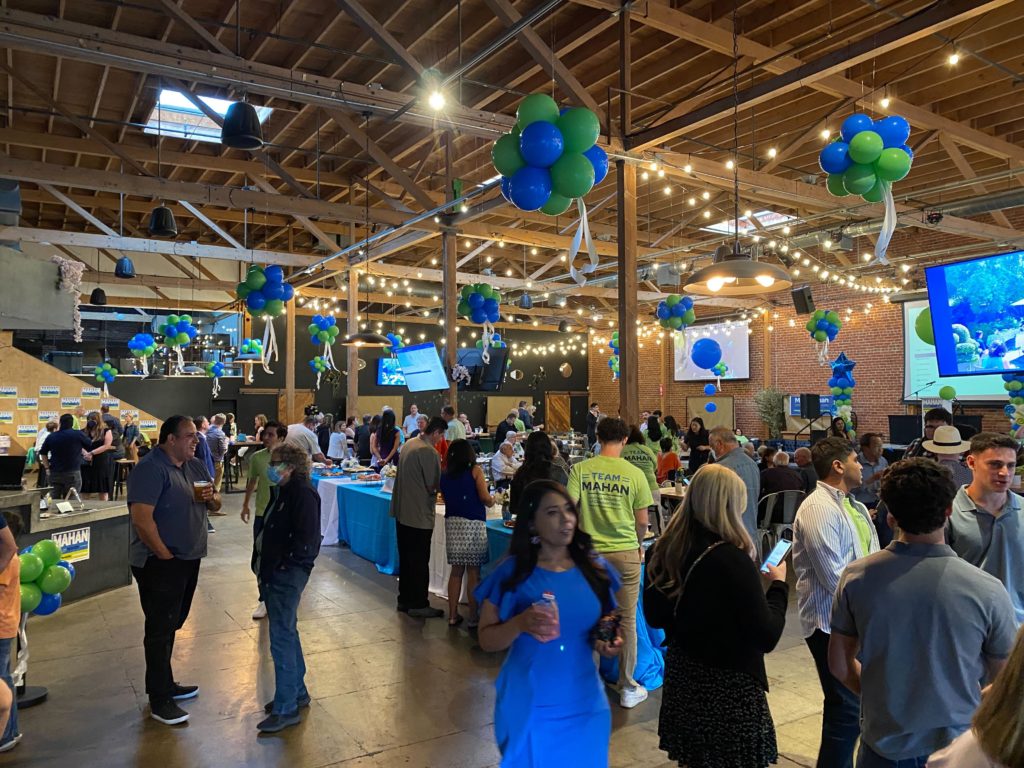 As of 8 p.m. Tuesday, early election results show Chavez has received 40.32% of the votes, with Mahan trailing in second with 31.64%. Officials have counted about 45% of the total ballots.

The heated contest is the first time San Joseans have elected a new mayor in nearly a decade. At Mahan’s election party at The Guildhouse on 1st Street, supporters donned green “Team Mahan” shirts and chatted in clusters as the first results came in.

Mahan and Chavez are headed to a November runoff to replace Mayor Sam Liccardo who terms out at the end of the year.

Chavez, a Democrat who has served as a supervisor since 2013, was previously a San Jose councilmember from 1996-2006. She also served as head of the South Bay Labor Council, which represents more than 100,000 union members in the region.

Chavez, 58, has won major endorsements from the South Bay Labor Council, the San Jose Police Officers’ Association and Bloom Energy executive Carl Guardino—a close friend of Liccardo. She has also received a staggering amount of support from the San Francisco 49ers football team executives, who endorsed her campaign and plugged $300,000 into an independent expenditure committee. As of April, she has raised over $810,000. Chavez’s campaign has captured the lion’s share of money raised by political action committees, raking in $1.1 million. Special interest groups spent $2.3 million on Silicon Valley candidates this primary, making it one of the most expensive elections in recent history.

Mahan, a 39-year-old Democrat, is comparatively new to politics, having won his City Council seat in District 10 in March 2020. Before serving in office Mahan worked various roles at two civic engagement tech startups—Causes and Brigade. He was also on the executive board of Silicon Valley Leadership Group and a commissioner on the San Jose Clean Energy Advisory Commission.

Mahan has won endorsements and support from the business community, including from the Silicon Valley Biz PAC and billionaire real estate developer John Sobrato. He has also been endorsed by former Federal Election Commission chair Ann Ravel. As of April, he has raised over $804,000. While Liccardo has not endorsed a successor, his political action committee has poured a considerable amount of money into supporting Mahan.

Is Cindy Chavez shifting to the right in San Jose mayor’s race?

Running behind the two front-runners is San Jose Councilmember Dev Davis who earned about 10% of the vote. Unlike the other frontrunners, Davis is non-party affiliated, having abandoned the Republican party in 2018. Davis, 44, was elected in 2016 to represent District 6, which includes Willow Glen and Buena Vista. Before entering politics, Davis worked for 12 years as an education researcher for Stanford University’s Center for Research on Education Outcomes and served as chair of San Jose’s Early Care and Education Committee.

Davis has received endorsements from former San Jose Mayor Chuck Reed, the anti-SB 9 group Families & Homes SJ and the Silicon Valley Taxpayers Association. As of April, she has raised $294,451.

San Jose Councilmember Raul Peralez, 40, was the first candidate to throw his hat in the ring last year. Early election results show him in fourth place with 8.43% of the vote. Peralez, a Democrat, was elected to the City Council to represent District 3 in 2014 and reelected in 2018. Peralez worked as a teacher and a police officer. He still serves as a reserve officer.

Peralez has been endorsed by fellow Councilmembers Sylvia Arenas, Magdalena Carrasco and Sergio Jimenez. He has raised $376,772.

Trailing the pack in financial support and endorsements are two outside candidates. One is Jim Spence, a 74-year-old retired San Jose Police Department sergeant. Spence, a registered Republican, worked for SJPD for three decades before retiring in 2001. He currently runs a private investigation firm. As of April, Spence has not reported any money raised, although he previously said he loaned himself $10,000.

The other candidate is Marshall Woodmansee, a 21-year-old student at San Jose State University. Woodmansee, who is pursuing a bachelor’s degree in global studies, previously served as a field director for state Sen. Dave Cortese’s senate campaign, and also worked on Jake Tonkel’s City Council campaign.

Woodmansee, who is not registered with a political party, hasn’t reported any campaign contributions but previously said he has raised $700.