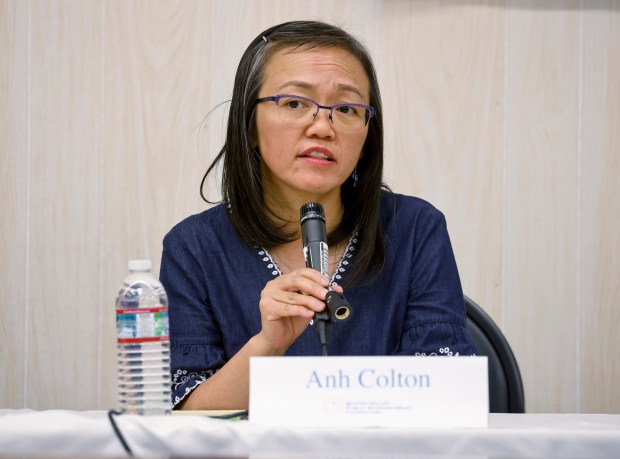 A fringe candidate for Santa Clara County sheriff has been charged with perjury on allegations she signed a sworn declaration that she had the state-mandated law-enforcement experience to run for the office, despite her own public admissions that she never worked as a sworn officer.

The charge against Anh Colton, 48, of Cupertino, was announced Thursday by the district attorney’s office. Colton did not immediately respond to a request for comment.

Records show Colton filed for her candidacy with the county registrar of voters in March. In an interview with the Bay Area News Group that month, she openly acknowledged that she did not have any law-enforcement experience in accordance with a California requirement for county sheriff candidates.

Colton also appeared in at least one sheriff candidate forum, hosted by the Silicon Valley Public Accountability Foundation, whose lead organizer later admitted to not knowing about her lack of eligibility.

Still, Colton remained on the ballot, because there was no readily available way of removing her.

This news organization first reported on doubts about Colton’s eligibility in April. In response to multiple inquiries, the registrar’s office said that it “relies upon the candidate’s signed declaration and sworn statement for county sheriff candidates, both signed under penalty of perjury, that they meet the qualifications to hold the office. It is the candidate’s responsibility to ensure they are eligible to run for any office they are seeking and to seek their own legal counsel to resolve any questions about their eligibility, if needed.”

The registrar’s office added that it had no unilateral authority to take Colton off the ballot. Officials further said she could be removed only by court order, which would have required someone — such as one of the other four active candidates — to sue over the matter. But no such lawsuit ever came.

Colton ended up garnering just over 4% of the vote in the June 7 primary. Her vote share would not have changed the outcome given that the two candidates who qualified for a November runoff — Palo Alto Police Chief Bob Jonsen and retired sheriff’s Capt. Kevin Jensen — led the third- and fourth-place candidates by double-digit percentage points.

Six-term Sheriff Laurie Smith did not run for re-election, as she endures a string of controversies led by corruption accusations by the county civil grand jury. If confirmed by a trial jury, those accusations could lead to her forced removal before her term ends in January.

The district attorney’s office stated in a Thursday news release that in late April, one of its investigators asked Colton about her law-enforcement experience, but was directed to her campaign adviser. The office contends that in May, the adviser sent an email telling the investigator “to stay away from Colton and she did not have to” answer his questions.

In a March interview, she answered a reporter’s question about her absence of necessary law-enforcement credentials by saying, “Yes I’m aware, I’m stepping out in faith.” At a candidate forum in early April, her answers to a moderator’s questions repeatedly included some mention of upholding Constitutional principles and of being a protector and peacekeeper. She often recited statutes and laws but exhibited no specific knowledge about what was asked.

The primary — and seemingly only — legal deterrent against including false statements on a candidate application is the provision that it is signed under penalty of perjury. In Colton’s case, that deterrent is now being put into effect. Sentences for a perjury conviction can range from probation to up to four years in jail.

“The qualifications for sheriff are not for show,” District Attorney Jeff Rosen said in a statement.