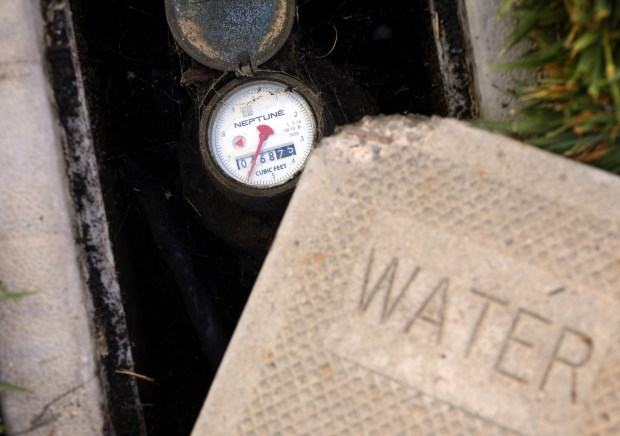 You’ve got a smart phone. Maybe a smart watch. Or even a smart doorbell.

In the coming months and years as California struggles with worsening droughts, millions of Bay Area residents will soon be getting a smart water meter.

Water meters — the clunky brass devices that sit in underground boxes near the sidewalks outside most homes and businesses, measuring water use — have been around since the 1820s. But in many areas, utilities only send out water bills every two months, or maybe once a month.

That means unless residents go out, lift the heavy concrete lid and dutifully write down the numbers on their analog water meters, most people don’t know until weeks have gone by that they have a major leak from irrigation systems, old pipes or toilets, wasting thousands of gallons of water and running up their bill.

A San Jose Water Company residential water meter is photographed along Los Suenos Avenue on Wednesday, June 15, 2022, in San Jose, Calif. The San Jose Water Company has received approval by state regulators to install smart water meter technology on all of the 230,000 water meters in homes and businesses in its area. The $100 million project will take four years and is expected to help save water. (Aric Crabb/Bay Area News Group)

Smart meters instead send wireless signals in real time so residents and utilities can better track water use hourly, daily or weekly, making it easier to hit conservation targets and detect leaks.

“We are trying to get our customers over the ignorance-is-bliss mentality to the knowledge-is-power mentality,” said Nelsy Rodriguez, a spokeswoman for the East Bay Municipal Utility District, which provides water to 1.4 million people in Alameda and Contra Costa counties.

San Francisco installed smart water meters in 2014 during California’s last drought. Boston, Washington D.C. and New York City have them. But smart meters are expensive to install. The technology changes every year. Some utilities have been reluctant to take the plunge.

As California’s latest drought stretches into its third year, water supplies continue to tighten and state conservation rules increase, so a growing number of water agencies are deciding to upgrade.

On Friday, the San Jose Water Company, a private firm that provides water to 1 million people in San Jose, Cupertino, Campbell, Los Gatos, Monte Sereno and Saratoga, received final approval from the California Public Utilities Commission to install smart meter technology on the 230,000 water meters at homes and businesses in its service area.

Work on the $100 million project will begin in two years and will finish in 2026, with the average water bill going up about $5 a month to pay for it, company officials say.

The company ran a pilot project in San Jose’s Willow Glen neighborhood and found homes with the technology cut water use 7% on average, and the duration of leaks fell 38%.

“It went well,” said Liann Walborsky, a San Jose Water spokeswoman. “The customers who were in the pilot really enjoyed that they were able to see their water usage, and we saw results in conservation.”

To the east, the Alameda County Water District, which serves Fremont, Union City and Newark, is spending $41 million to upgrade its 86,500 meters by 2023. It already has finished 17,500, said spokeswoman Sharene Gonzales.

To the north, the Marin Municipal Water District is moving forward with plans to replace its 58,000 analog meters over three years at a cost ranging from $20 million to $25 million.

And East Bay MUD has installed smart meter technology on about 19,000 homes and businesses. The district’s board, based in Oakland, is scheduled to decide in September whether to expand the program.

“Just about every utility I know has a full smart meter system, or is investigating it, or is in the process of deploying it,” said Dave Wallenstein, an associate engineer with East Bay MUD.

The technology is not without controversy. When Pacific Gas & Electric installed smart gas and electricity meters across Northern California a decade ago, a small but vocal group of protesters fought the idea. They raised concerns about privacy and potential health risks.

In 2011, the California Council on Science and Technology, which advises state government on technology issues, concluded the radio frequency emissions from smart meters were well within federal safety standards for cellphones and microwave ovens.

Still, most agencies, including PG&E, allow customers to opt-out. Walborsky said San Jose Water will do that when specific plans are finished in the next two years and installation begins.

For people who already track their electricity use closely or watch their gas mileage in real time while driving, a smart water meter is another tool to “geek out” on, say some experts. Most systems, like San Francisco’s, allow people to log on to a website and track their water use. Some have smart phone apps. Some send text messages when there are big spikes in water use.

San Jose Water Company meter reader Jonny Som is photographed along Los Suenos Avenue during his workday on Wednesday, June 15, 2022, in San Jose, Calif. The San Jose Water Company has received approval by state regulators to install smart water meter technology on all of the 230,000 water meters in homes and businesses in its area. The $100 million project will take four years and is expected to help save water. (Aric Crabb/Bay Area News Group)

“I remember a project I was working on in Coachella Valley where somebody had a really high water bill,” said Lon House, a veteran energy and water consultant who works in Arizona and California. “They got irate. The water company said, ‘You used a lot of water in this particular week.’ They said, ‘Oh yeah, we went on a trip and left the hose running.’ ”

On privacy, as part of its approval from the state PUC, San Jose Water and its contractors are required to comply with the California Consumer Privacy Act and not transmit specific information, such as customer names or bill payment status, over the wireless network.

Some East Coast utilities have installed smart meters to cut down on labor costs. With wireless signals sent from meters directly, they no longer need employees to manually read the meters.

Some water experts say that as climate change continues to heat up the already arid West, nearly every city will have smart water meters, which also can detect large leaks in distribution pipes and, in some cases, more easily locate people who are watering lawns over the limited number of days in droughts.

“In a drought, a utility can either say, ‘You can never water your grass again,’ or you can say, ‘Here’s how much water you can use, you decide when you use it and how you use it,’ ” House said. “It’s a two-edged sword. It can be a bludgeon from the government, or it can be enabling for customers. But given what California is facing, they have to do this.”

Facebook
Twitter
Pinterest
WhatsApp
Previous articleEstonia Leads The Way: A Company Can Be Established In Just 15 Minutes (The 7 “Winning” Characteristics Of This Country)
Next articleFormer Santa Clara County sheriff candidate charged with perjury