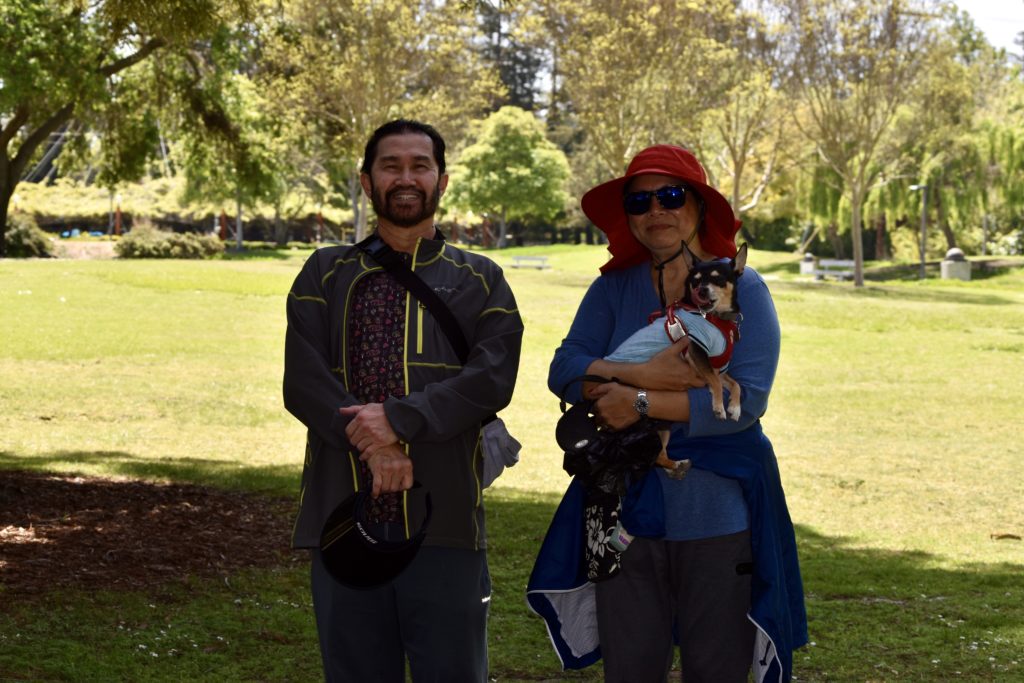 Going to Santa Clara’s Central Park? Watch where you step

The park is home to—by one count—about 176 Canada geese, and each one drops roughly a pound of excrement every day. Over a year, that adds up to more than 63,000 pounds of feces dropped at the park, according to a city report.

Park visitors are well-aware of the problem.

“The poop is just too much,” said Ramon Ochoa, who walks at the park daily. “It’s like a booby trap.”

He and his wife Nilda, who’ve lived in Santa Clara for decades, were at the park Thursday walking their dog, Thor. The goose population seems to have increased over the last five to 10 years, Nilda said.

Ramon and Nilda Ochoa, who come to Santa Clara’s Central Park regularly with their dog Thor, said the goose droppings are everywhere. Photo by Kate Bradshaw.

Eversley Forte, chair of Santa Clara’s Parks and Recreation Commission, said the goal of the plan is to change migration and nesting patterns—and ultimately reduce the goose population. While they’ll never completely go away, he said, the goal is to make the situation more manageable.

“If they’re born there, that is their home. They come back to it each year,” Forte told thecupertinodigest.com. “We’d like to see less (geese) coming here in the first place and making it home.”

To do that, the city contracted with avian wildlife biologist Daniel Edelstein to develop the management plan, which the parks commission reviewed before it went to council. The parks portion of the city budget is $11.7 million for the current year, and the plan isn’t expected to have any additional impact on the city’s general fund.

The problem is also an environmental concern, according to Edelstein’s report. It increases demands on park maintenance, impacts water quality at the lake and has potential for spreading avian diseases to other bird species.

Goose droppings litter the path alongside the lake at Central Park in Santa Clara. Photo by Kate Bradshaw.

“Doing something to try to minimize the number of geese that want to stay (in the park) is a sound plan from a financial perspective,” he said.

The management plan has several steps. The first is to stop people from feeding geese.

“That is extremely important,” Matthew Dodder, executive director of the Santa Clara Valley Audubon Society, told thecupertinodigest.com. “It’s horribly unhealthy for the birds. They enjoy the food, but they don’t digest it well. It can block up their systems and kill them.”

The next step is to prevent the birds from getting into the lake through fencing or vegetation around the lake’s perimeter. The third step is to stop geese from breeding at the lake.

The city will start “addling” goose eggs while parent geese are away to prevent hatching and minimize the number of new geese born at the lake. Addling is when immature eggs are covered with oil or punctured to keep the eggs from developing and ultimately hatching. It fools the geese into thinking their nest is full and prevents them from setting up another nest during mating season, Dodder explained.

Historically, Dodder said, neighboring cities have tried using drones, dogs, scarecrows, water cannons and even hiring children to chase the geese away, all to no avail.

According to park visitors, the volume of excrement around the park Thursday was significantly less than normal, but it was a problem they’d all experienced. They suspected it was because the water has been drained from the park’s lake for maintenance.

“It does look less bad today,” said Kunaal Motreja, who has been visiting the park for about two months with his dog, Deebo.

Some families reported mixed experiences with the park’s resident geese.

Dmitrii Pureav, who lives in a nearby Santa Clara apartment, was there with his 5-year-old son Eiroslav. “It’s uncomfortable,” he said. But, he added, the children like to feed the geese.

Dmitrii Pureav and his son Eiroslav, 5, at Santa Clara’s Central Park. His children like to feed the geese, Pureav said. Photo by Kate Bradshaw.

Some seem to have made their peace with the geese. Michael and Rita Fallon, who have lived in Santa Clara since 1980 and walk their dogs in the park most days, said it doesn’t impact them.

“It comes with the territory,” said Michael Fallon.

The post Going to Santa Clara’s Central Park? Watch where you step appeared first on thecupertinodigest.com.