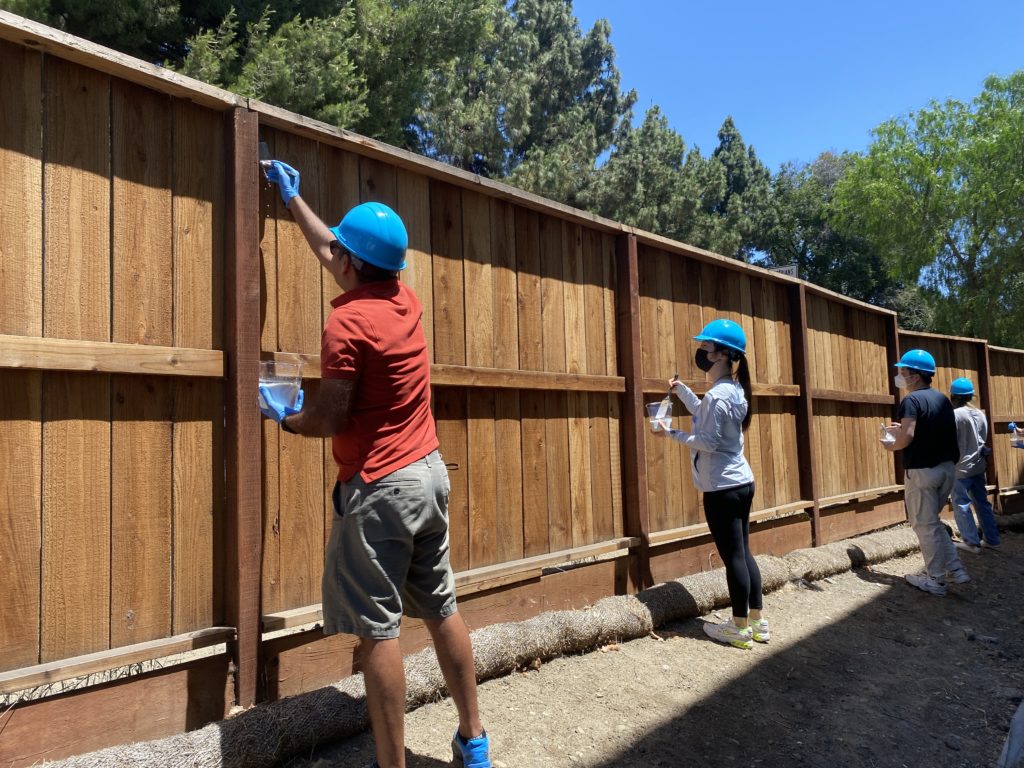 A 112-year-old house will soon turn into affordable homes for four families thanks to a tech giant’s multi-million dollar loan.

Habitat for Humanity Bay Area, which consists of the Habitat East Bay/Silicon Valley and the Habitat Greater San Francisco, is receiving the $10 million loan from Mountain View-based Google to renovate and build a number of homes across six Bay Area counties—including more than a dozen units in San Jose. The housing will be reserved for low-income, first-time homeowners, representatives of the developer said.

The loan is part of a years-long $1 billion effort by Google to help address the lack of affordable housing in Silicon Valley.

The nonprofit developer and Google announced the partnership in front of the historic Pallesen Apartments building, now located at the corner of Fourth and Reed streets—one of the first projects being funded by the new loan. Roughly 12 Google workers showed up to help with site work Friday.

More than dozen Google workers volunteered Friday to help with the renovation of the historic Pallesen Apartments building. Photo by Tran Nguyen.

Will San Jose meet its affordable housing goals for the Diridon area?

The renovation, which would take up to a year, will upgrade the century-old house into new homes for four low-income families in San Jose, said Janice Jensen, president and CEO of Habitat East Bay/Silicon Valley.

The building, a Mission Revival-style fourplex built in 1910, sat at 14 E. Reed Street for more than 100 years. It was home to a couple of Danish immigrants, who also rented the rooms to local working class people. Although the house is on San Jose’s historic inventory list, it has to be part of the National Registry to avoid being demolished. The historic building was slated for demolition to make way for a mixed-use project last year. Downtown residents and the Preservation Action Council successfully rallied to save the home and it was moved down to its current location.

Google, which has plans to build a mega campus in San Jose, has already committed $200 million in community benefit funds to the city over the next 10 years. San Jose recently approved spending $4.5 million from Google on education, job training, scholarships and neighborhood-serving programs. An advisory committee has formed to decide how to disperse the remaining dollars from the tech titan.

Google has also promised to designate 25% of the 4,000 homes in its downtown San Jose project as affordable, along with 7.3 million square feet of office space, 3,000 market-rate homes, 15 acres of parks and a 30,000-50,000-square-foot community center. The campus will also feature 500,000 square feet for retail, cultural, education and arts uses. Construction is scheduled to start in the next year. San Jose approved the project in 2021.

“The Bay Area is our home, and as we continue to grow, we’re committed to helping our hometown communities solve challenging problems,” said Javier Gonzalez, Google’s head of local government affairs and public policy and a San Jose native, noting Google’s $1 billion commitment has helped bring affordable housing online in the Bay Area.

San Jose Mayor Sam Liccardo praised Google for its partnership with the nonprofit developer and its willingness to work with the city.

“This partnership is not just rebuilding homes, it’s rebuilding lives and communities,” Liccardo said. “This is really an extraordinary opportunity to help stabilize this community.”

Downtown Councilmember Raul Peralez, who played a pivotal role in saving the Pallesen Apartments building, said the renovation project serves as a bridge connecting the past of San Jose to its future.

“We saved a piece of history of San Jose,” Peralez said of the history building, “Now turning it into affordable housing for our future and community members here in San Jose—it’s really just a tremendous opportunity, and it would not be possible without Google.”