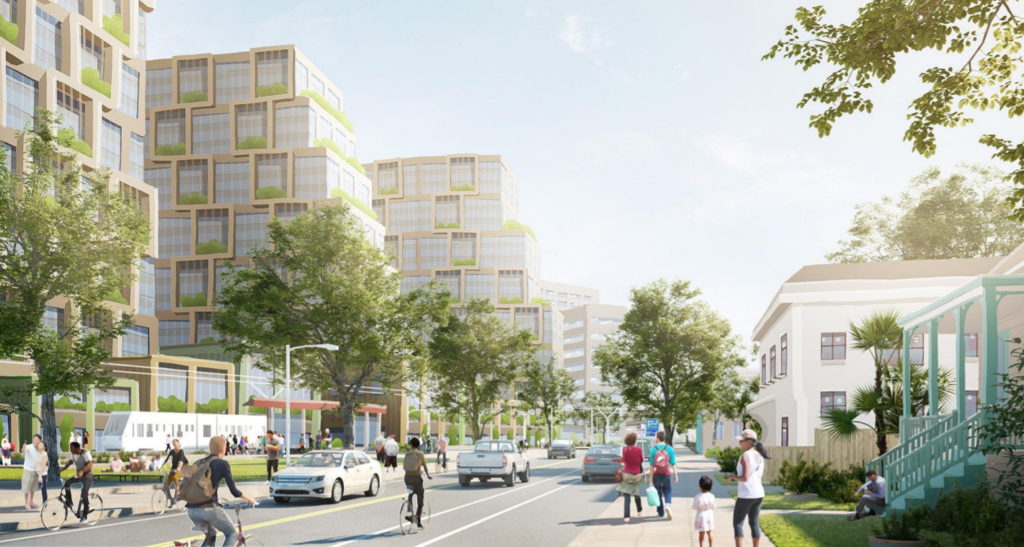 For the first time in roughly two years, Google held an in-person community forum for San Jose residents to learn about the tech company’s plans for a campus that will dramatically change downtown.

On Saturday, residents browsed colorful poster boards and spoke with Google representatives at an event near the SAP Center. Sheela Jivan, Google’s director of real estate development, told thecupertinodigest.com the company wants to reconnect with the public as it assembles its project team.

The San Jose City Council approved Google’s Downtown West project almost a year ago, following three years of intense negotiations. The multi-billion-dollar development, which will take about a decade to complete, will cover 80 acres near Diridon Station—and Google anticipates up to 25,000 people working in its downtown offices. The campus will feature 7.3 million square feet of office space, 4,000 residences, 15 acres of parks, and a large community center. Roughly a quarter of the housing is slated to be affordable.

Elizabeth Chien-Hale, president of the San Jose Downtown Residents Association and candidate for the City Council District 3 seat, told thecupertinodigest.com she appreciates Google’s continued outreach and efforts to align its climate goals with those of the city.

“I have an ongoing concern, since Google’s campus is going to be there, about what’s going to happen to the old Diridon Station,” Chien-Hale said, referring to the downtown transit center set to be the hub of several major projects over the next decade, including the extension of BART into downtown San Jose. “I don’t think Google is going to be the decision-maker on that, but obviously it will have a very loud voice.”

Downtown West has faced community scrutiny and concerns about how it will impact rents in the downtown core. Google tried to address this by setting up a $200 million community benefits fund to give grants to low-income residents at risk of displacement. San Jose officials recently authorized spending $4.5 million from the fund on education, job training, scholarships and strengthening neighborhood-serving programs.

Bert Weaver, a resident who lives a couple blocks from the SAP Center, said he thinks the project is fantastic, and he’s excited to see the neighborhood redeveloped. He has concerns about traffic congestion, but they’re outweighed by the potential positives of the project.

City officials also had to guarantee San Jose Sharks Sports and Entertainment nearly 3,000 parking spaces during the construction of the campus to keep the franchise from filing a legal challenge against the project.

Matt Sing, a volunteer for the downtown farmers market, told thecupertinodigest.com he’s concerned about Google’s campus not being sufficiently connected to the rest of downtown. He said this is important because if the campus is isolated it won’t bring foot traffic to existing retailers.

“It’s got to jump start the whole (downtown),” Sing said. “It needs to create a synergy, an energy or some sort of identity that this place can be known for, so people will come here instead of San Francisco or Oakland.”