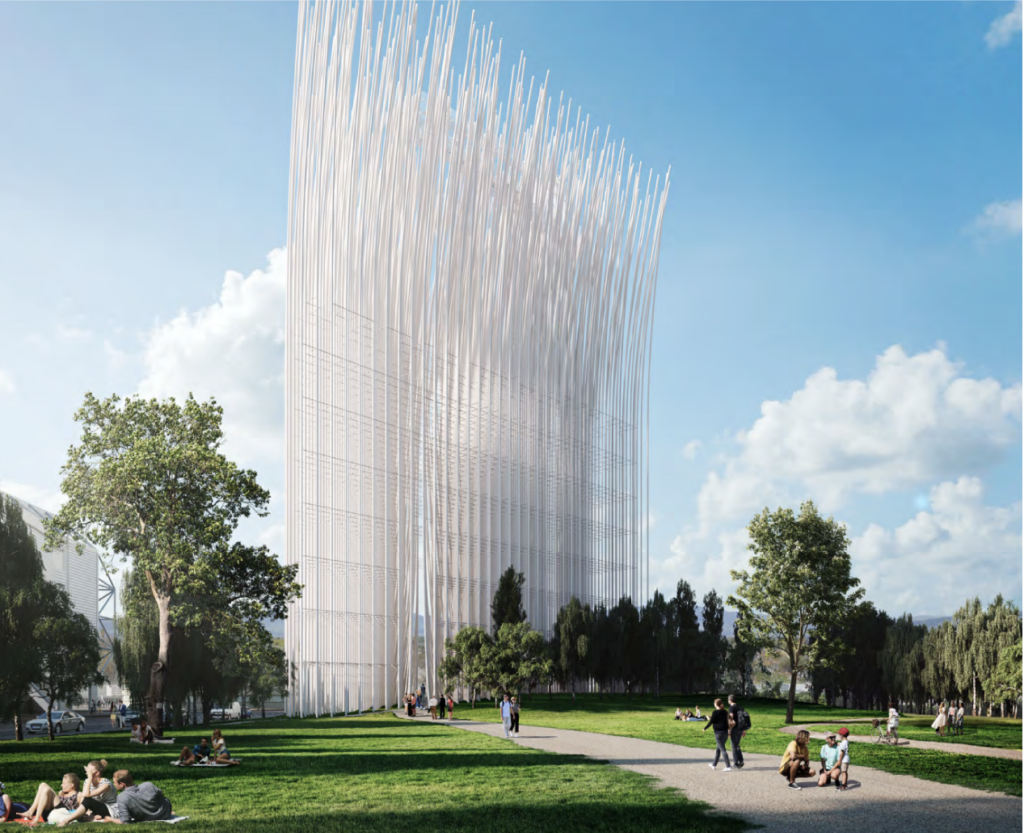 An anticipated landmark in downtown San Jose isn’t going to be a breeze to install.

The City Council unanimously voted last May to install an iconic landmark, dubbed “The Breeze of Innovation.” The design beat out nearly 1,000 submissions in an international competition launched in 2019 for creating a new landmark at Arena Green, where the Guadalupe River Park and Los Gatos Creek meet.

However, environmental concerns that the structure could contribute to light pollution and harm native birds and plants—along with its eye-popping $100 million price tag—have delayed the project.

Urban Confluence Silicon Valley was tasked with raising about $90 million for the project last year. Executive Director Steve Borkenhagen declined to comment on how close they are to reaching the goal.

The landmark, gifted to the city by San José Light Tower Corporation, will be located at the southern tip of Guadalupe River Park. It’s designed to consist of 500 flexible, 200-foot rods which will sway in the wind, provide electricity to the building and light up at night, with a viewing platform that offers 360-degree views of San Jose, an exhibition space and room for a café.

Environmental organizations the Sierra Club Loma Prieta Chapter and Green Foothills have voiced opposition to the project from the start.

“Green Foothills opposes this large, heavily-lit project in an environmentally sensitive area at the confluence of Guadalupe River and Los Gatos Creek,” Executive Director Megan Fluke told thecupertinodigest.com. “Our concern has always been that nighttime lighting next to the creek corridor will negatively impact local species, particularly insects and birds. This is inexcusable, especially on public parkland, with the global biodiversity crisis we are facing.”

“Investment in Arena Green should create a green heart to the city and celebrate nature and the diversity of San Jose,” he told thecupertinodigest.com, noting costs and technical barriers are likely to end the project.

Nicolle Burnham, deputy director for San Jose Parks, Recreation and Neighborhood Services, said the City Council has not been given any new reports since last year.

In a Feb. 10 presentation to a city committee, Burnham explained the project is running slightly behind schedule until outreach work is done. Burnham told thecupertinodigest.com the department hired a consultant to serve as project manager.

“The environmental analysis cannot begin until there is more clarity on the proposed design,” Burnham said.

Residents have said they are leery of such an extravagant cost for the landmark. However, others are hopeful it will reinvigorate downtown San Jose by bringing visitors year-round.

“When people from around the world come to ‘see’ Silicon Valley, they will go to the Breeze of Innovation. It will in time become the iconic landmark for our valley—a gathering place, tourist attraction and artistic wonder,” San Jose Downtown Association CEO Scott Knies told thecupertinodigest.com.