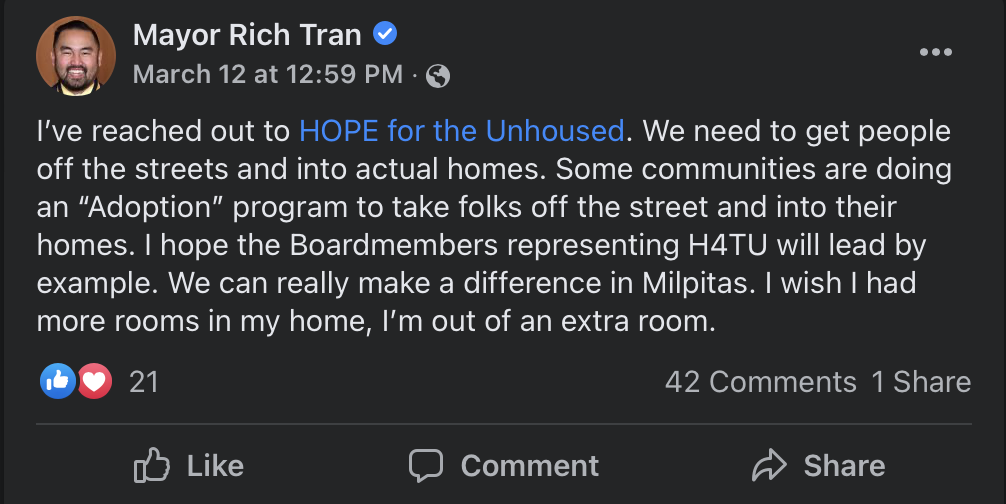 The homeless crisis in Milpitas might be headed for a dead end. Some officials and advocates blame the mayor for exacerbating the problem.

Milpitas, a city of roughly 80,000 people, started to see its homeless population balloon during the COVID-19 pandemic. An encampment behind the city’s library, one of the largest camps in Milpitas, has grown to 18 RVs and vehicles—with roughly a dozen people sleeping there. According to the county, there are about 100 unhoused people citywide.

While advocates and some city councilmembers seek ways to get unhoused residents services and housing, they say Mayor Rich Tran stonewalls—and at times, mocks—their efforts.

“When we look at other cities, the mayors of those cities are really taking a preventive approach to homelessness and addressing homelessness head on,” Milpitas Councilmember Karina Dominguez told thecupertinodigest.com. “We have not had that leadership in this city. Frankly, it’s incredibly embarrassing.”

In a recent social media post, Tran called on advocates of the nonprofit HOPE for the Unhoused to adopt unhoused people to “make a difference.”

“I wish I had more rooms in my home, I’m out of an extra room,” Tran said on Facebook.

The mayor has also spent the last few weeks touting plans to explore ordinances to put locks on shopping carts and prohibit storing private belongings on public streets—laws that would further criminalize the unhoused population.

Members of HOPE for the Unhoused have spent the last two years helping the city’s homeless people, bringing them food, taking them to medical appointments, offering up their homes as transitional housing and hauling trash from the encampment after the city refused to provide dumpster and trash pickups along Railroad Avenue. They called the mayor’s post an attack.

“We have spent two years trying to sit down and work with the mayor with no success,” Yolie Garcia, a member of the nonprofit, told thecupertinodigest.com. “I’m exhausted and I feel insulted.”

Dominguez also pitched tents in front of City Hall earlier this month to protest the mayor’s plan to eliminate an outreach and assessment homeless program with the county. She pointed to the city’s $16 million in federal American Rescue Plan funding as a possible way to increase services for the unhoused—a proposal Tran shut down.

“The conversation has been held hostage by the mayor,” Dominguez told thecupertinodigest.com. “The mayor does not want to put this conversation on the agenda.”

Tran said he’s not “at war with the homeless (population)” in responding to a resident on Facebook this week.

“I am listening to hard working residents in many neighborhoods who are greatly concerned about blight and public safety,” Tran wrote.

At the center of the tension is the homeless camp located on Railroad Avenue.

In February, Tran tried to sweep a row of vehicles—home to an 82-year-old veteran, a domestic violence survivor and people with disabilities, among others. The plan unraveled after the Silicon Valley Law Foundation sent Milpitas a letter calling the abatement unconstitutional.

Then on March 9, the police department issued a 72-hour notice that vehicles at the camp would be fined and towed over the weekend. Advocates and unhoused people spent last Saturday waiting for the tow trucks, fearing their shelters and property would be removed. But it didn’t happen. Instead, Milpitas police showed up on Sunday at 4 a.m.  to issue parking tickets instead.

Teo Cajes, who has been homeless for five years, found a part-time job recently. He hopes the city won’t tow his car. Photo by Tran Nguyen.

“I pray to God that they don’t tow my car away,” Teo Cajes told thecupertinodigest.com, standing in front of a broken car that he sleeps in. “This is all I got.”

Morales said the department has worked with advocates to help homeless people, but the city needs to address concerns from businesses on Main Street and nearby warehouses.

“Enforcement is not an attempt to criminalize the people that are out there,” Morales told thecupertinodigest.com. “We will continue to partner with outside groups to help them.”

Unhoused residents along Railroad Avenue said they know the law.

“But where (are) we supposed to go?” Lynn Shipman told thecupertinodigest.com, adding there’s a two-year wait for any mobile home park in the South Bay. “I can feel my shoulders all tensed up thinking about it.”

Advocates working with the unhoused and the city are equally frustrated .