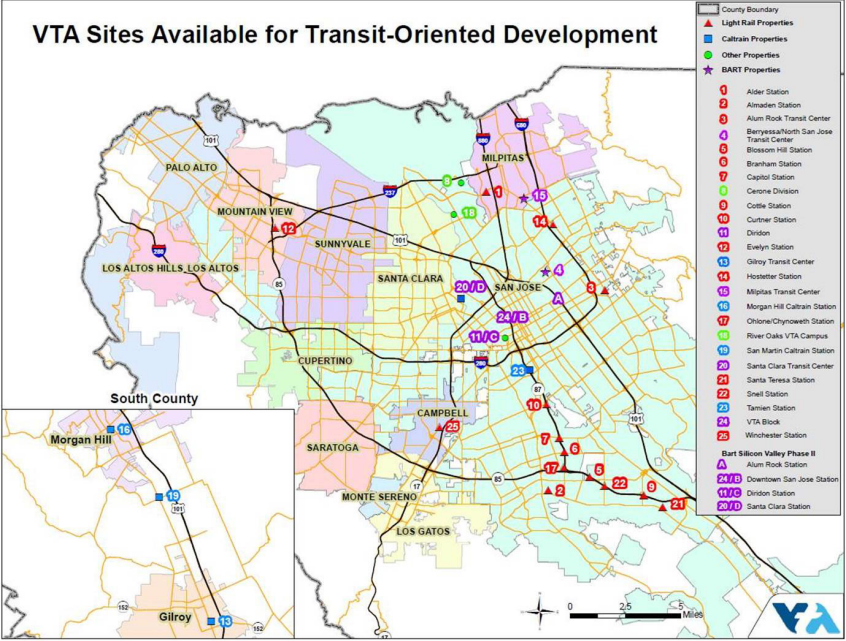 By leasing surplus land near light rail stations to private developers or government housing agencies, VTA hopes to collect steady revenue from leases and new riders. The transportation agency sees this as a strategy to address the regional housing shortage and its own financial problems.

“Sustainable sources of revenue, such as income from transit-oriented developments, really creates a long-term stable revenue source that can be utilized for increasing and improving services,” Jessie O’Malley Solis, VTA’s project manager for these developments, told thecupertinodigest.com.

The agency is betting big on this vision: VTA currently has nine residential projects in various stages of progress or completion in San Jose, Mountain View and Gilroy. VTA has 25 total sites eligible for future development. By 2040, the agency anticipates it will have more than 7,000 residences—2,500 listed as affordable—garnering almost $60 million per year in additional revenue.

The agency completed two of these projects in San Jose the 1990s—one near Almaden Station and another near Ohlone Chynoweth Station. Solis said VTA created an official policy in 2009 for creating transit developments and hired personnel to expand the agency’s housing portfolio.

“We’ve been at the planning stages for a few years, and now we’re really ramping up and hitting the implementation phase of our program,” Solis said. “We’ve got a nice pipeline, and I’m really looking forward to a lot of groundbreakings in the near term.”

County Supervisor Cindy Chavez, who sits on the VTA board, said the agency updated its policy in 2016 to ensure at least 35% of the transit development homes are affordable to people making 60% of the area median income, which in Santa Clara County is more than $151,000.

Transit advocate and thecupertinodigest.com columnist Monica Mallon said these developments are a good idea, but she’s skeptical they’ll add significant revenue from new riders. Land lease agreements for the developments will provide reliable income for the agency, she added. That’s critical for VTA, which has high operational costs.

“We’re in a better financial situation, but we’re not in a perfect one,” Mallon told thecupertinodigest.com. “Every single dollar we can get from any source for operations is really important to go after.”

Former San Jose Councilmember and VTA board member Johnny Khamis said he is generally supportive of transit-oriented developments, but noted they pose challenges like any housing project. He supported a transit-oriented development near Blossom Hill Road, but opposed one near Ohlone Chynoweth Station because it would impact parking at the nearby Westfield Oakridge Mall.

Khamis, who is running for the county District 1 supervisor seat, doesn’t believe transit-oriented developments will address the agency’s greater underlying financial issues, such as its high operations expenditures. Last year, the agency projected its expenses will exceed revenues by $47.5 million by 2031. VTA has also grappled with low ridership during the pandemic. The agency had to suspend rail operations for several months after an employee killed nine workers at the Guadalupe rail yard.

“Unless they get an understanding of what they need to do to fix the problem of why nobody wants to ride light rail, these new housing projects aren’t going to keep them out of the hole,” Khamis told thecupertinodigest.com.

“It’s smart to diversify your revenue portfolio and take advantage of land available for affordable housing,” he told thecupertinodigest.com.

Last year, Cortese introduced a bill signed into law, Senate Bill 791, which created a special unit in the state department of housing to help local agencies like VTA develop surplus land into housing.

“It’s not going to solve the housing crisis, but it’s a major piece of the puzzle in terms of using everything we have available to us,” he said.