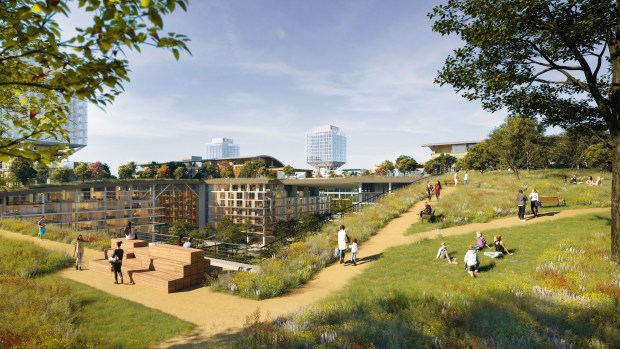 CUPERTINO — Developers of a proposed village of homes, shops, restaurants, entertainment hubs and offices in Cupertino where the Vallco Mall once stood are now seeking residents and tenants after years of litigation and opposition.

The Rise is the name of a vast and ambitious neighborhood, rich with greenery and open space, that developers hope will replace the dead and demolished mall in the coming years.

“We really want to do something special with this 50-acre site in the heart of Silicon Valley,” said Reed Moulds, a managing director with Sand Hill Property Co., the firm that intends to build the neighborhood slated to be Cupertino’s new town square.

Sand Hill Property hopes that the name of the development will reflect the innovation culture of Silicon Valley.

“The Rise is born from the global capital of innovation,” Moulds said. “Silicon Valley has changed the way the world lives, and The Rise aspires to fundamentally change how Silicon Valley lives.”

The development has been engulfed in controversy and litigation in recent years. Some residents have attempted to block the project over concerns it could unleash brutal new traffic jams. Further conflicts arose when a neighborhood group, Friends of Better Cupertino, filed a lawsuit that claimed the project didn’t qualify for a streamlined approval process under rules laid out by a state law known as SB 35.

Ultimately, project proponents were able to navigate past an array of legal and procedural roadblocks, although a fresh challenge has arisen.

The most recent major obstacle is the removal of toxic contamination from chemicals that have laced the soil due to the operation of a Sears automotive shop and dry cleaning establishments on the site. Sand Hill Property is moving forward with remediation of the contamination.

But now the project is pushing ahead.

The developers said they have hired commercial real estate brokerage firms to market both the retail and the offices. Lockehouse Real Estate Group and Newmark are handling the retail and Cushman & Wakefield is seeking office tenants.

The offices will cater to both tech companies and life science firms, which have become a major driver of demand for office space in the Bay Area lately.

Plus, the project will include about 2,400 housing units, of which 1,200 are slated to be affordable residences.

“People will have a full suite of housing options, including market-rate and affordable,” Moulds said. “There will be options for all income levels.”

Sand Hill Property believes it can begin excavation and other work this year that needs to take place before major construction begins. In 2023, Sand Hill aims to push ahead with the vertical elements of the huge new neighborhood.

Still, plenty of work will be required before the project can reach a visible construction phase, Cupertino Mayor Darcy Paul noted.

“I fully expect there will be a slew of work to be done at the jurisdictional level,” Paul said. “Water, electricity, sewage, transit infrastructure must all be addressed.”

The remediation of the contamination is a key part of the process, the mayor said. Santa Clara County health officials are supervising the cleanup.

“We have been concerned about the soil contamination cleanup. We want to be fair to the applicant, but we also want to be sure that the environment is safe for everyone,” Paul said.

One of the major features of the project is a “green roof” that will be the primary component of the 40 acres of open space planned within the development.

“The green roof concept will extend to just about every part of this project,” Moulds said. “The idea is to make this a destination for the community.”

The project will be built in phases over several years, according to Sand Hill.

The first phase will feature 350,000 square feet of retail, restaurant and entertainment uses, along with 800 homes and numerous open spaces, Moulds said. Offices won’t appear until later phases of the project.

“This is exactly what the community has been telling us to do,” Moulds said. “They want to see the dining, entertainment, shopping and housing first. They want to see elements that they don’t have in the area right now.”