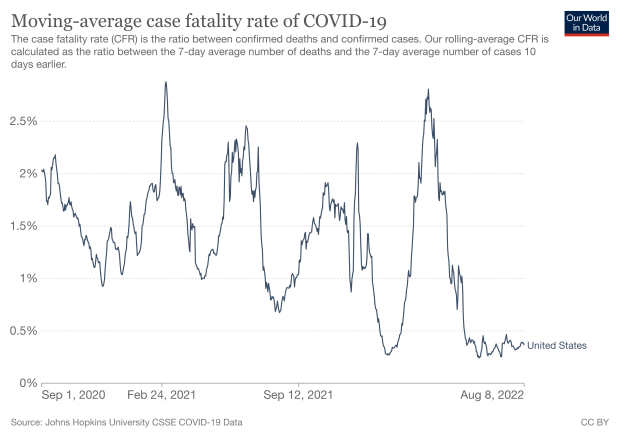 Is COVID losing its fangs and becoming more like the flu?

Today’s hyper-transmissible strain of the COVID-19 virus has sent cases soaring across the country. But rising deaths — the grim marker of earlier dangerous surges — haven’t kept pace, and the average risk of dying from an infection is dropping to levels almost as low as seasonal influenza, leading epidemiologists say.

Is the COVID virus — that has killed more than 1 million Americans — losing its fangs?

George Lemp, an infectious disease epidemiologist who has analyzed California public health data through the pandemic, thinks so. He said death rates have fallen consistently over the last two and a half years.

“COVID-19 case fatality rates are substantially lower and are rapidly approaching that of the annual flu,” said Lemp, former Director of the California HIV/AIDS Research Program at the University of California, Office of the President.

Death rates, or case fatality ratios, reflect the number of reported deaths as a percentage of known cases. The Centers for Disease Control and Prevention reported an estimated 29 million flu illnesses and 28,000 deaths nationally in 2018-19, a death rate of 0.1%. For the season before that, there were 41 million flu-related illnesses and 52,000 deaths, a rate of 0.13%.

Lemp said California Department of Public Health data show that California’s COVID-19 death rate early in the pandemic, from February 2020 to May 2021, was 1.7% overall and dropped to 1.11% when the delta variant hit from July to December 2021.

When the even more transmissible omicron variant BA.1 hit from December through February, the rate fell to 0.34%. The most recent data with the omicron sub-variants BA.4 and BA.5 from June and July show a rate of 0.38%.

That would conservatively put the death rates from the current omicron BA.5 variant around 0.19%, a more flu-like level, he said. Though death rates are progressively higher with age, they have declined in all age groups.

National data show similar results. Our World in Data project, a public online data hub based at the University of Oxford, calculates the current U.S. COVID-19 death rate at 0.36%, down from a high of 2.88% in March 2021, using Johns Hopkins University case and death data.

All such calculations, of course, are subject to considerable uncertainty due to limitations of available data. Influenza case numbers are even less precise than those for COVID-19. The CDC and state public health officials had no comment on the COVID-19 death rates.

While epidemiologists agree the current virus is proving less lethal than earlier variants, it is still a killer and has made the many people who were infected recently and recovered absolutely miserable. The virus is killing an average of nearly 400 Americans and 40 Californians a day.

“COVID is the third-leading cause of death in U.S. this year,” said Dr. George Rutherford, an infectious disease specialist at UC San Francisco. “This is not trivial.”

He and Lemp agree there are many reasons why the virus is killing fewer today than in years past: increased vaccination, booster shots, improved patient care techniques and better treatments such as the antiviral drug Paxlovid all play a role.

The way the virus has mutated to become more transmissible also is a factor. Earlier versions tended to cause infections deep within the lungs. That kept them from spreading as easily but often led to life-threatening lung infections. Today’s omicron variant tends to settle in the body’s upper airways, allowing it spread much more easily but often producing less severe illness.

Rutherford said his elderly mother got the latest version and recovered.

“She was hoarse for two days and was fine,” Rutherford said. “But it just as easily could have gone south.”

Today’s dominant BA.5 version accounts for some nine out of 10 cases nationally, and no other variants have yet emerged that seem to be elbowing it aside — for now. But after repeated waves of COVID-19 infection spawned by new variants, health experts don’t think BA.5 is COVID’s last hurrah.

The virus has shown itself to mutate easily and circulates both in people and many animals that live around them. And while vaccine makers are planning an updated shot this fall based on the omicron BA.1 variant that erupted over the winter, there’s no telling how well it will work and for how long against any new variants.

Rutherford said that the virus mutates to evade our immune system in order to keep spreading, and how deadly it proves to be is incidental. But it doesn’t take much for a virus mutation to make it more transmissible, more deadly, or both.

“That’s just one mutation away from happening,” Rutherford said.