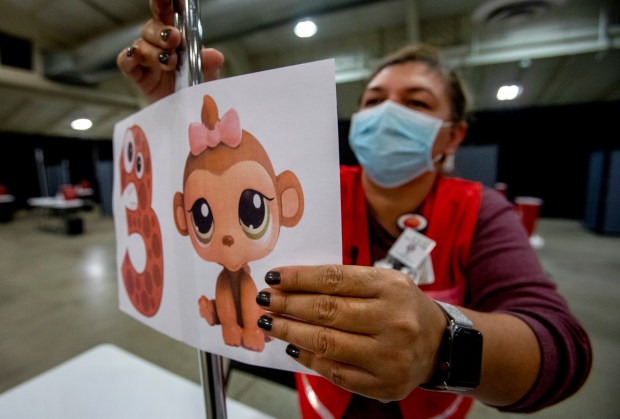 Lukewarm interest in COVID-19 vaccine for kids under 5

U.S. health officials hailed the recent authorization of COVID-19 vaccines for very young children as a pandemic milestone — making the protective shots available to Americans of any age. But despite the rapid spread of the virus, few parents have rushed to get their infants, toddlers and preschoolers jabbed.

As of Aug. 3, the Centers for Disease Control and Prevention reported that nationwide, just 4% of the 19 million U.S. children under age 5 have received a first dose of the Pfizer or Moderna vaccines since the agency recommended the shots on June 18.

Even in California and the Bay Area, parents have been slow to haul their tots in for the shots, given in two doses a month apart for Moderna and three doses over 11 weeks for Pfizer. Statewide, the California Department of Public Health reported that about 6.4% of the 2.2 million California children in that age group have had a first dose as of Aug. 2.

Although the rates are higher in the Bay Area, most county health officials say demand has lagged behind what they saw for older kids. In Contra Costa County for example, about 14% of kids under 5 have had at least one dose, compared to 33% in the first month after kids ages 5-11 became eligible last November, and 45% in the first month after ages 12-15 became eligible in May 2021.

“Demand has been modest and well below the pace we saw for other age groups when they became eligible,” said Contra Costa Health Services spokesman Will Harper. “It does seem like we have a steeper hill to climb for this age group than others.”

Elsewhere around the Bay Area, the rate of first doses among kids under 5 ranged from 30% in Marin County to 5% in Solano County, based on state health records and finance department population projections. It was 18% in Alameda and 16% in Santa Clara and more than 22% in San Francisco – more than four times the 5% rate in Los Angeles County.

“I think some parents were waiting out the rush to not risk having to stand in long lines,” Tong said. “Others were waiting to see what the experience is of other parents. I think some people might have been traveling over these last several weeks. We may see more who are restarting preschool or day care, so I suspect over the next couple weeks we’ll continue to see several first doses coming in.”

A July 26 survey by the Kaiser Family Foundation found just 17% of parents of kids under 5 said they had either gotten their children vaccinated or planned to do so right away, while 43% said they definitely would not and 13% said they would get them inoculated only if required for school or day care.

More than eight in 10 parents of kids under 5 said they had concerns about serious side effects or long-term risks from the shots, and seven out of 10 felt the vaccines wouldn’t prevent their kids from getting sick. More than half, including four out of 10 vaccinated parents, say the vaccines pose a greater risk to their kids than the virus.

Though COVID-19 rates remain sky-high around the country, hospitalizations and deaths have not risen as they did in the past. And healthy children remain least vulnerable to severe illness and death from the virus, which is more dangerous with age and infirmity.

What’s more, so many now have been infected with COVID-19 – a recent CDC study estimated two in three American adults and three in four children – that fear of the virus has ebbed. As one Hispanic mother in California, a Democrat, told the Kaiser foundation when asked about vaccinating her very young children, “COVID doesn’t seem to affect them too much. They have gotten COVID before and got over it fine.”

But public health officials insist the vaccines are less risky than the virus, which can cause lingering debilitating symptoms known as “long COVID,” even among children.

“Just like the flu vaccine, that protects her and keeps her in school and prevents her from getting severely ill if she did contract COVID,” Austin said. But about half the parents she knows with kids that age aren’t vaccinating them.

“Most often, they don’t feel like kids are dying of it,” Austin said.

San Francisco’s public health department said in a statement that “based on questions and concerns we heard from parents, guardians, and interest groups prior to the eligibility expansion, we knew that COVID-19 vaccine uptake for children under 5 would be slower.”

As Tong put it, “the rush has definitely ended, so this is a good time to get an appointment before school starts.”