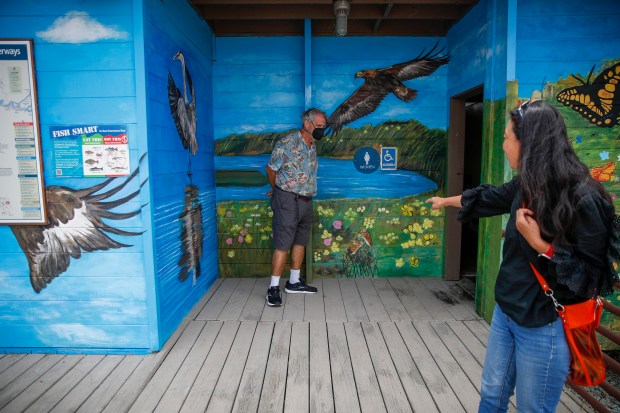 Sixth-grader Ruina Li, 11, helped paint some white flowers over four days. Sophomore Jason Li, 15, created a tree and texturized it with mixed colors before drawing leaves on flowers and clouds in the sky.

The pair worked with at least 10 other kids ranging in ages from 9 to 15 years old and Bay Area muralist Xiangfei Bai during the first week of August to beautify the outer walls of a bathroom at Stevens Creek Park in Cupertino.

The collaboration was part of a Santa Clara County Parks program that grouped students with the artist to complete two new public murals. The first was finished earlier this summer on the outside walls of bathrooms at Alviso Marina.

Although she had never painted anything before, Ruina learned on the job and said now she wants to develop her newfound talent.

“I like drawing. I want to get to a point where I like it and I’m good at it,” she said.

Jason Li, on the other hand, has taken art classes in school, but this was his first time painting anything on a wall. He began working on the project months before the younger students who took part in the painting during their summer camps, helping and learning from Catherine Liu, executive director of the South Bay nonprofit CompassPoint Mentorship. Liu coordinated meetings and completed the administrative work that goes on behind the scenes to realize public artwork.

“I think it’s turned out really well,” Jason said about signing on to help CompassPoint Mentorship, which connects high school graduates with rising juniors and seniors from their alma mater. “I’m proud of myself for sticking through it, because I can see the hard work and final project right in front of me. … I watched this wall go from nothing to an actual art piece in just a matter of a few days.”

That’s exactly what Liu intended when she started raising funds for the murals.

“The art is really something to pull the community together,” Liu said. “I’m not an artist myself, but I really like to grow more artists, especially in some of the underserved communities. … So by having all those murals, I’m hoping to get more grants from government and local companies to help the underserved population more into art and grow them into future artists.”

Liu’s project started with a proposal to beautify five walls at four Santa Clara County parks and culminated in Xiangfei Bai and his student volunteers completing murals on four outer walls of a restroom at Alviso Marina park and another at Stevens Creek County Park. While Bai and the kids completed the work at Stevens Creek, the park remained open and people could stop by and watch the artists.

When finished, the mural will depict a scenic view of the rolling hills nestled behind the various woodlands in the park. A black-tailed deer, arboreal salamander and the American dipper — a bird that often is found along streams at the park and elsewhere — will also be featured.

Fundraising for the Stevens Creek park mural is ongoing, with $5,000 of the estimated $8,000 project coming from Santa Clara Valley Water District. Liu is looking to raise another $2,700 or so to break even.

The mural at Alviso Marina surrounds the public restrooms building on all four sides with picturesque views of landscapes and wildlife found in and around the park. One side of the building depicts the wetlands and images of a harbor seal, muskrat and salt marsh harvest mouse. On other walls, park visitors are treated to bright blue skies and images of an American white pelican and northern harrier taking flight.

“The Alviso Marina mural represents more than just artwork or an educational experience for the campers,” Liu said. “When our students lift up the paintbrush, they are connecting with the community around them and taking part in a larger conversation around how we can all be good stewards of the environment.”

From left to right, Angela Tang, 11, from Saratoga, with her brothers William, 13, and Michael, 9, paint a mural sponsored by CompassPoint Mentorship and the County of Santa Clara at Villa Maria Picnic Area at Stevens Creek Park in Cupertino, Calif., on Wednesday, Aug. 3, 2022. (Nhat V. Meyer/Bay Area News Group)

A bee in a mural is touched up at Villa Maria Picnic Area at Stevens Creek Park in Cupertino, Calif., on Wednesday, Aug. 3, 2022. (Nhat V. Meyer/Bay Area News Group)