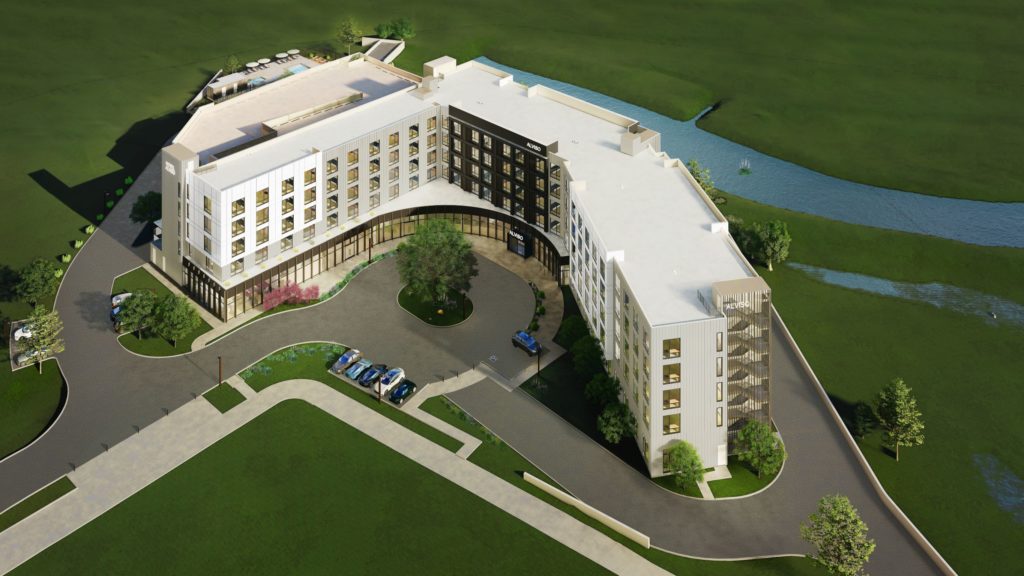 North San Jose hotel could be boon to Alviso community

A burgeoning area of Alviso along the Guadalupe River could soon see construction begin on a new upscale business hotel.

Following two different appeals challenging the development’s environmental review that were quashed by the San Jose City Council, Milpitas-based Terra Development Partners has been given the green light to move forward with plans for the 214-room hotel.

Plans call for the 112,000-square-foot hotel to be five stories, with an accompanying four-story parking garage, all located immediately south of Topgolf, according to city documents. The site is north of Highway 237 and bounded by the Guadalupe River to the west and office buildings to the east.

The hotel’s development, which could be complete within three years, is expected to add another feather in the cap of the small North San Jose community that has seen major commercial and entertainment developments go up or gain approval in recent years, along with high-profile technology companies like Google, Dell and Hewlett Packard setting up shop there.

The hotel is part of a larger Alviso development known as The Shops@Terra, which includes the multi-story Topgolf business, opened in 2021, and plans for retail and commercial space, headed up by the same developer. Other major office and commercial developments already exist nearby off North First Street.

Richard Santos, a property owner in Alviso, area advocate and Valley Water board member, supports the project and said it will spur long-needed improvements nearby.

“When you build this you have to do the amenities, also,” Santos told thecupertinodigest.com. “We get paving on Liberty Street, Moffat Street, and you put a sidewalk all the way down First Street. Those are benefits that should have been done, and the city never did it after 54 years.”

More development is envisioned in long-range planning for the area, including another potential hotel, according to the city and the developer. The wave of new business-driven development over the past several years has helped Alviso—which once served as the area’s main shipping and travel port until the late 19th century—earn an updated reputation as a gateway to San Jose.

David Kim, an architect on the project, said the hotel is set to be a “four-star upper class business hotel” with modern amenities. It will feature batten board and wood design elements, aiming to blend in with natural elements nearby and evoke a nautical theme in line with Alviso’s history as a commerce port, he said.

An overhead rendering of a hotel planned to be built in Alviso. Image courtesy of Corbel Architects.

While the city’s planning director previously approved plans for the hotel in April, the project’s environmental review was later appealed by a laborers union and an Alviso resident, Mark Espinoza, who has challenged other developments in the area.

Espinoza sued the developer and city in 2017 as part of a community group effort to block Topgolf, but ultimately settled out of court later that year.

He, as well as an attorney for the union, told councilmembers the city’s environmental review was inadequate, and they should have denied the project until the full environmental impact report could be completed.

Brian B. Flynn, an attorney from the firm Lozeau Drury representing Laborers’ International Union of North America local chapter 207, told officials their own expert found 62 different species of wildlife at the site, including some species of special concern such as the Western Pond Turtles and burrowing owls. Flynn said the city’s environmental review only listed “a fraction” of those species, and “underestimates the diversity of wildlife utilizing the site.”

The city stood by its review, with staff reports saying the environmental analysis is adequate and in line with state standards, and any impacts to wildlife can be reduced with proper mitigation measures.

Espinoza said the development would add to an already congested area and that it should be denied.

“Why do we need nine hotels within walking distance of our community? That’s just overwhelming,” he said.

District 4 Councilmember David Cohen, who represents Alviso, said during the meeting the Santa Clara Valley Audubon Society is working with the developer to address bird safety issues that could arise from the development.

“As we’re building along the Guadalupe River where this project is, and in Alviso, we have to be extra aware of the environmental impact of projects like this,” he said.

The hotel is planned for a site north of Highway 237, with the Guadalupe River to the west. Image courtesy of Corbel Architects.

Cohen also expressed support for the hotel and the growth at the south edge of Alviso.

“Google is moving in by the end of this year to the Cisco campus area. We have some businesses there, we have Topgolf and I’m excited that Second Harvest is proposing their headquarters and distribution center right next to where this hotel will be,” he said.

Santos said he’s long supported the broader Terra Development plans for commercial or office buildings, because there will be less density and more open space.

“If we don’t do this now, what are you going to get? You’re going to get 90 to 100 buildings in there, it would be a disaster. So you say thanks for what you can get,” he said.

The post North San Jose hotel could be boon to Alviso community appeared first on thecupertinodigest.com.