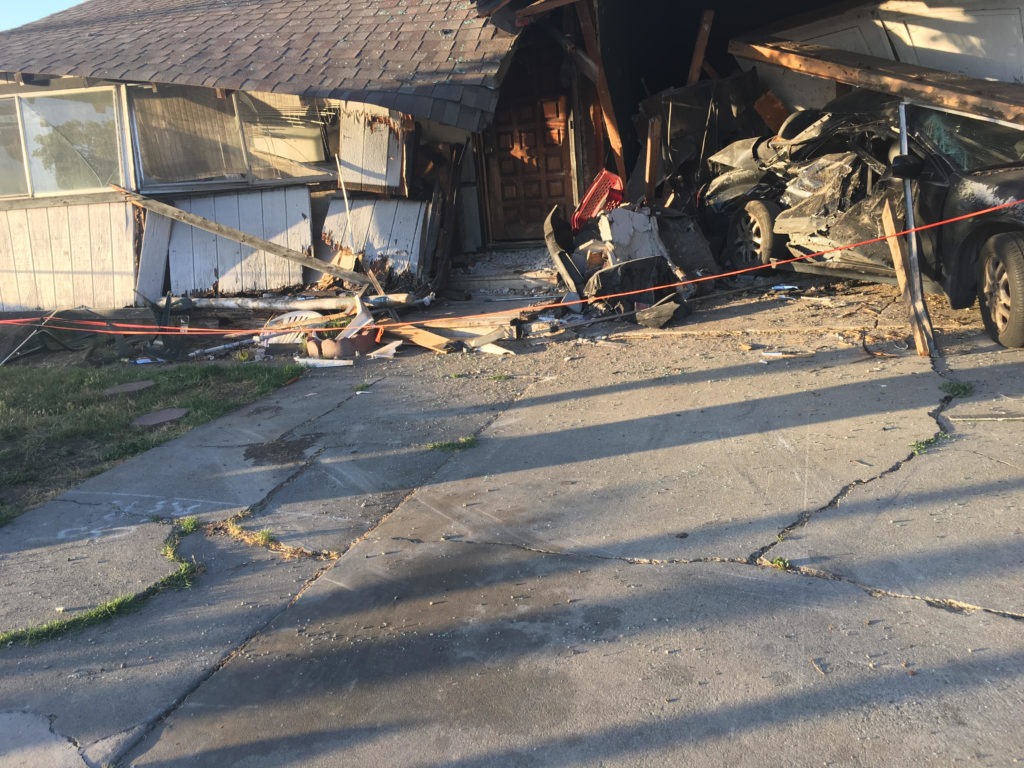 Ray Minter was drifting off to sleep when a loud boom shook his East San Jose home.

A moment of panic set in as he shuffled out of bed to understand what jolted his house like an earthquake. He knew it was too short to be an earthquake and too intense to be something heavy falling off a shelf. Then he realized, another car had crashed into his home.

It was the 23rd time it had happened to him. A 2016 GMC High Sierra truck barreled into his living room, even though Minter had installed preventative metal gates, poles and a brick barrier around his house. The crash compromised the structural integrity of the house and destroyed his garage and Honda Accord.

“It was going 105 miles per hour when it pushed my car and everything into my garage,” Minter told thecupertinodigest.com. “I wish I could tell you I was scared, but after years of dealing with this, you get used to it.”

The damage from a car that crashed into Minter’s home. Photo courtesy of Ray Minter.

Life changed drastically for Minter after the Jackson Avenue exit off Interstate 680 was built in the 1970s. Drivers came barreling off the exit, endangering the lives of his family and damaging his home. He asked city officials dozens of times to close the center lane off the freeway exit or put some barriers up to encourage people to slow down, but said his request fell on deaf ears. Nothing has changed in more than 50 years and he doesn’t know if it ever will.

“They basically told me unless someone dies, we can’t do anything,” Minter said. “The city says it’s the state’s responsibility because the highway belongs to the state, and the state blames the city. I just gave up trying to talk to them.”

Minter has lived in his home since the 1960s. He recalls a neighborhood filled with fruit orchards, until Interstate 680 was built.

Minter and his family live across from the Jackson Avenue exit, so oftentimes drunk or inattentive drivers speed off the interstate and into his East San Jose home. Minter said he’s paid more than $30,000 to build barriers to protect his home—including seven 15-inch diameter metal poles that go five feet into the ground.

“All of them have been replaced several times,” Minter said. “Twice, a car has hit them and bounced right off, but sometimes depending on how a car comes in, it doesn’t protect us at all.”

The dozens of accidents into and around his home have resulted in totaled cars, the destruction of trees planted by his parents and a couple of near-death experiences for family members.

One Mother’s Day, a car went airborne after the driver sped off the freeway and hit a curb. The woman driver, still in her car, landed in Minter’s driveway, pushing his car into his garage.

“I thought she landed on my dad because that is where he was sitting, but luckily he got up to go inside just a few minutes before the crash,” Minter said.

Another time, a car flew past the lights at the intersection and ran into his toddler-aged niece playing outside. She spent a night in the hospital, Minter said, though luckily she wasn’t seriously injured.

Jackson Avenue is one of the most dangerous corridors in San Jose, with more than 28 fatal or severe injuries and 43 pedestrians and bicyclists hit in the last five years. It ranks seventh in terms of deaths or serious injuries per mile, according to city data.

The location of Minter’s house puts him in the accident bullseye for the most crashes. But he isn’t the only one on Jackson Avenue who has put barriers around their homes for protection. Several homes have put up their own metal fences and concrete barriers with scratch marks that indicate they have been struck by cars.

The damage from a car that crashed into Minter’s home. Photo courtesy of Ray Minter.

City officials say the problem is Jackson Avenue is too wide, with many drivers speeding at least 10 miles above the posted 35 mph speed limit. The bike lanes are also confined and unprotected, and there aren’t enough crosswalks.

The city is hoping to get needed funding to make major infrastructure improvements along the 3.1-mile stretch from Berryessa Road to Story Road. In late July, the city applied for a $40 million One Bay Area Grant, a regional grant that disperses federal transportation dollars, to build out safety plans. The city wants to narrow the roads and place protective metal and plastic barriers to create safer intersections like it has downtown. It also wants to create a raised bike lane which is separated from automobile traffic with a sidewalk-like barrier. Reconstruction is expected to cost around $50 million.

“The conceptual plan also includes a reconfiguration of the intersection that includes the I-680 off-ramp and Bambi Lane, which is one location where a house has reportedly been struck,” Colin Heyne, spokesperson for the city’s transportation department, told thecupertinodigest.com. “The plan also includes a landscaped median for much of the corridor that should enhance safety.”

The house he referenced is Minter’s home.

If San Jose gets the grant by early 2023, the city will need to start construction by 2026. City officials said they expect construction to start around then because the city is still in the conceptual phase of the design. It will need to go through several iterations and approvals before the city can break ground.

Heyne also said the grant process is competitive. There are 60 applications in Santa Clara County alone.

“However, the One Bay Area Grant is not the only grant program,” Heyne said. “We will continue to pursue grant funding for Jackson until it is funded.”

Minter’s barriers as seen from the street. Photo by Jana Kadah.

Daniela Castañeda, Silicon Valley Bicycle Coalition’s East San Jose community organizer, said she is hopeful the city is finally paying attention. But safety problems are the result of underinvestment in the east side and poor street planning.

“You kind of wonder, how in the world do you have one part of town that has these beautiful trees and perfect streets to walk in, and then the other side doesn’t see the same dollars,” Castañeda told thecupertinodigest.com. “I think for a long time the city didn’t want to pay attention until it had to.”

An analysis by thecupertinodigest.com found most of the dangerous corridors, accidents and traffic-related deaths occur on the east side of San Jose, with more than 70% of all traffic-related deaths in 2021. District 7 had the most fatalities at 16—all along Monterey Road, Story Road, McLaughlin Avenue, Capitol Expressway, Tully Road and Senter Road.

But there are glimmers of hope. The proposed safety infrastructure does work, Castañeda said.

In 2020, the city spent under $1 million to paint the intersections along Senter Road and put green bollards and plastic barriers to force drivers to slow down. Traffic-related deaths and serious injuries along Senter Road dropped from 15 in 2020 to five in 2021, according to city data.

“I can’t say that I’m hopeful,” Minter said. “In the city of San Jose, you just have to wait and see.”