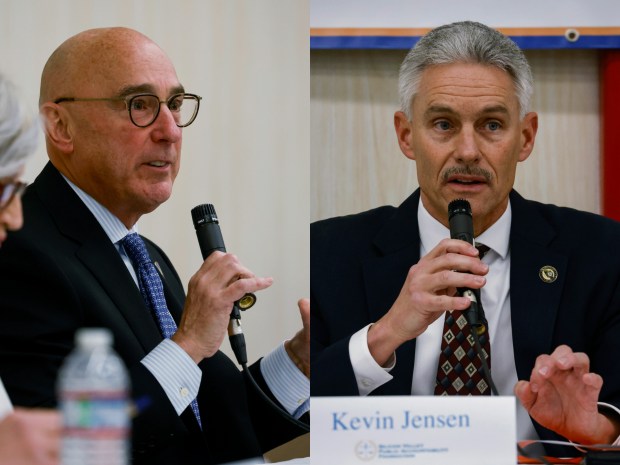 With an estimated 52% of ballots counted according to the county registrar, Jonsen had garnered about 34% of the vote, followed by Jensen — who ran against Smith in 2014 — who tallied about 30%.

The two other eligible candidates, correctional sergeants Christine Nagaye and Sean Allen, got about 19% and 13% of the initial returns.

Jonsen is the lone outsider in the sheriff’s race, and had a lengthy career in the Los Angeles Sheriff’s Department before he headed to the Bay Area in the past decade to become chief of Menlo Park police, followed by his current stint in Palo Alto.

“I’m feeling encouraged, but we have a long way to go,” Jonsen said Tuesday night. “What this is showing is that voters have trust in my background and leadership, which I’m humbled by. People believe it is time for a fresh perspective, and my experience gives me an opportunity to address the challenges this department is confronted with.”

Jonsen, who grew up in the North Bay, also claims a family connection to the post he is pursuing: His great uncle, Jonathan Sweigert, was Santa Clara County sheriff from 1887 to 1891.

Jensen, who spent his entire career with the sheriff’s office, was the frontrunner within the agency, having garnered union endorsements from both the patrol and enforcement deputies, and the correctional deputies and officers, as well as a lion’s share of the law-enforcement establishment in the South Bay.

He said he anticipated that a runoff was in the cards, but that he is confident that his backing and experience with the inner workings of the sheriff’s office will prove to be strong assets in November.

“I’m proud to still be in the fight I’ve been in for 12 years to restore the integrity of the sheriff’s office,” Jensen said Tuesday. “Nobody knows the department better than me. It’s going to come down to experience.”

In a statement late Tuesday, Nagaye congratulated Jonsen and Jensen, and said she will work with them to make the institutional changes she ran on.

“I pledge to do everything in my power to support whoever wins, although I am concerned the much needed changes will not be made with either of them fulfilling this role,” she said. “We are in desperate need for law enforcement reform in the sheriff’s office, and tonight’s results have only strengthened my resolve to be a part of that.”

The question of whether the county would get a new sheriff was answered in March when Smith formally announced that she would not run for a seventh term, a decision that had been anticipated since last fall, as months went by with no sign of Smith launching a re-election campaign or engaging in any fundraising.

Her decision against a re-election bid was preceded by a series of scandals, chief among them a corruption indictment alleging that a past fundraising ally, her undersheriff, a captain and close adviser, and other supporters conspired to broker concealed-carry weapon (CCW) permits for political support and favors. But last fall also saw her office come under scrutiny from the Board of Supervisors over her management and perceived coverup of major jail-inmate injuries that prompted millions of dollars in county settlements.

That criticism spurred an investigation by the state attorney general and direct corruption accusations against Smith herself by the county’s Civil Grand Jury, involving the CCW controversy and an allegation she has resisted a civilian auditor’s investigation into one of the jail-injury cases. A guilty finding of any of the accusations would compel her removal from office if the civil trial finishes before her term does, in January 2023.

Check back later for updates to this story.