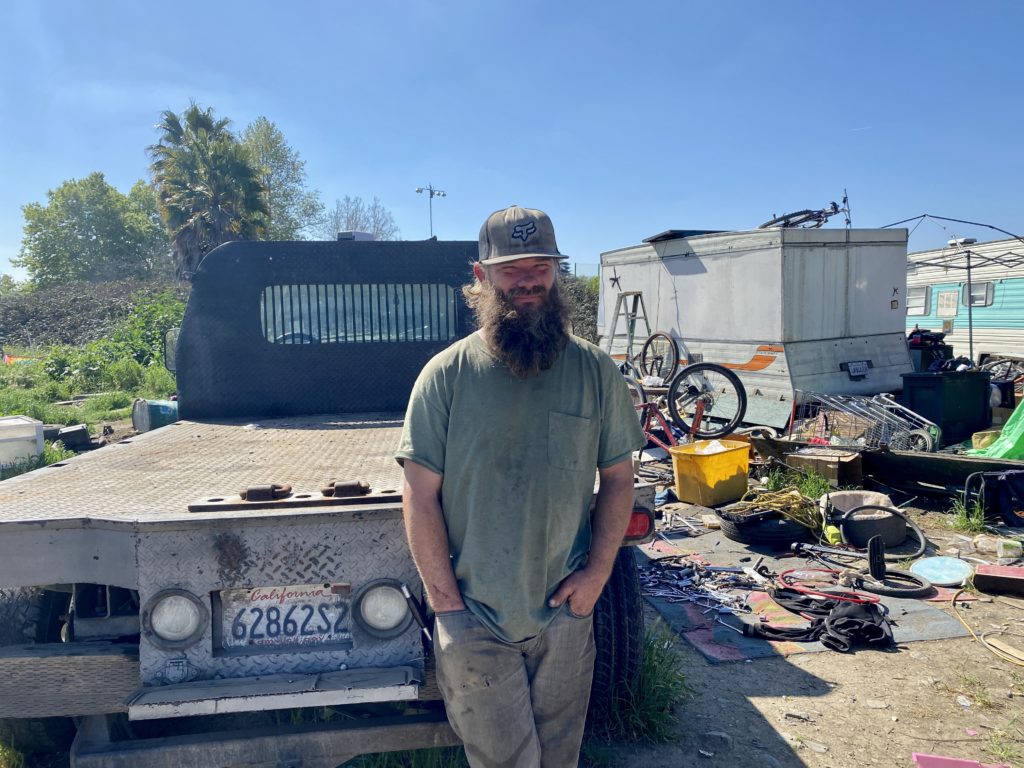 With the deadline to clear one of the Bay Area’s largest homeless camps looming, San Jose has started towing cars and RVs near Columbus Park this week—a move that has prompted concern from advocates and homeless residents.

With no advance notice, the city put up towing signs throughout the 18 acres area near Columbus Park and the Guadalupe River Trail on Monday, with tow trucks arriving shortly after. The city towed seven vehicles Monday—all of them either lacked proper registration or were deemed unrepairable, city officials said.

“No motorized vehicles allowed,” the notices read in English, Spanish and Vietnamese. “Any vehicles along the trail or in the Stage 3 area will be subject to tow starting 3/21/22.”

Stage 3 area is where the majority of the camp is located after the city swept hundreds of people off the land between Spring and Walnut streets. The initiative is part of the city’s final phase to clear the region’s largest homeless encampment ahead of the June 30 deadline to comply with demands from the Federal Aviation Administration, city spokesperson Daniel Lazo said. The site sits on airport property under the direct flight path of the downtown San Jose airport, sparking safety concerns. The FAA has threatened to withhold millions in federal funding if this isn’t done.

Bobby Jones said the city towed away his car because of its expired tag. Photo by Tran Nguyen.

The notices immediately sent unhoused people into panic mode and sounded alarms from homeless advocates. Billy Jones, who has been homeless for roughly a decade, said one of his cars was towed Monday.

“They just rolled in with tow trucks. I wasn’t here when they got here, but I saw them leave with my car,” Jones said. “I tried to chase after it. It’s just one headache after another.”

Jones said his 1996 Honda Accord had expired tags and broke down recently. He had figured out how to fix it but didn’t have enough money to make the repairs.

San Jose officials said the city is focusing on clearing out abandoned, burned or stolen vehicles. The notices also apply to all vehicles that illegally enter the river trail.

“We understand that the clearing of vehicles at this location understandably creates stress for many residents,” Lazo told thecupertinodigest.com. “It’s very important for our city staff that the process be handled with compassion and respect for the people displaced.”

In the past year, to deter people from staying at the park, the city has cut water, installed K-Rail barriers and taken out dumpsters which created a rat infestation issue.

Leticia Ortiz, an unhoused person staying at Columbus Park, said cars are vital to living on the streets.

“You gotta have a car for food, for appointments, and some people use it as shelter,” Ortiz said. “I understand the ones that are beyond repair, but it’s terrible that they’re towing cars with expired tags.”

With no advance notice, the city put up towing signs throughout the 18 acres area near Columbus Park and the Guadalupe River Trail on Monday, with tow trucks arriving shortly after. Photo by Tran Nguyen.

Advocate Richard Scott also questioned the city’s language, which doesn’t specify which types of vehicles would be towed. He worries the city will start penalizing anybody who comes near the camps.

“This prevents (us) from taking food, water or just meetings with people who need it,” Scott told thecupertinodigest.com. “The attitude and the actions of the Beautify SJ department is very unsympathetic to both the unhoused and the advocates.”

Scott and other advocates have raised issues about the language the city uses in its notices in the past. A misleading clean-up notice from last month drove some unhoused people to leave their camps along the Guadalupe River Trail ahead of an important homeless count.

The city is working with HomeFirst, a nonprofit that provides homeless services, to help people fix and register their vehicles. But unhoused people at the site said progress is slow.

“I came to sign up on the day they started and they already told me there’s a long line,” Buchi Aralu told thecupertinodigest.com.

Eugene Blackwell, who had two of his cars towed this week, said the mechanic hired by HomeFirst also gave him a wrong diagnosis.

“I just feel stuck,” Blackwell told thecupertinodigest.com. “I’m looking for housing, but many places turned me away because of my felony from 10 years ago. I did my time but it still haunts me.”

Advocate Gail Osmer is connecting people at the camp with the Silicon Valley Law Foundation.

“This is just not right, and you have a right to fight this,” Osmer told Jones Wednesday, as she promised to come back with attorneys who could help him get his car back.